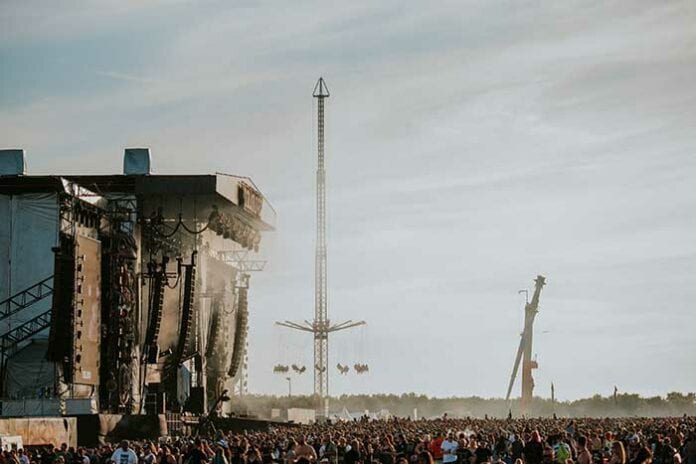 Americans have long been drooling over the mythical festival across the pond known as Download. One of the largest metal events in the world, Download Festival attracts thousands of patrons from all over the world for one week in June. Since its beginning in 2003, Donington Park has grown in notoriety for hosting the biggest bands in the world.

Luckily, living in 2019 gifts us some modern conveniences, like big metal machines that allow us to fly out of our American bubble and over to strange new lands. Here is our list of the top 20 reasons you should hop on that plane and travel over to this year’s Download Festival, June 14–16.

Music festivals attract interest for two key reasons. The first, being able to see all of your favorite bands in one place, and second, the community aspect. Yes, there is a community in American music festivals and scenes as well, but the one at Download is a beast of its own. The ultimate gathering of like-minded individuals paired with European camaraderie, you will make the best friends of your life at Download (and you won’t even know their names).

From being greeted with free beers to being invited to hang out at the party tents and tell bad jokes, the metal community you’ll step into reminds us all why we all love the music in the first place. You’ve come home my friend, you’ve come home.

2. All of the biggest bands—all in one place.

2019 features an enormous lineup of pure metal drool-worthiness. Nearly every rock and metal genre is represented, with bands from all over the world flying out to rock your world. Bands that are known and bands that will soon be known will all be sharing the same stages and bringing metal glory to the thousands in attendance.

However, the reason you need to go buy a plane ticket right NOW is all the heavy hitters playing this year. Where else can you have Lamb of God, Slash, Slipknot, Tool, Trivium, Behemoth, Slayer, Def Leppard, Rob Zombie, Halestorm, Skindred, Three Days Grace, and countless more in the same place? Maybe if you’re lucky, you’ll even be able to share a beer with em’.

3. You know Slayer’s last UK performance is going to be a big crowd hit.

Speaking of Slayer, this is the last time those boys will show their faces in the UK as a band. That’s kind of a big deal. Now, consider the fact that the crowd is just as important as the band’s performance. If the crowd is pumped and into it, you will be too. This show will be Slayer’s last performance on UK soil, and I bet you that the fans will not let the band forget it!

If you answered no to any of the above, get on a plane to Download Festival right now. You’ll thank us later.

5. Did I mention the shopping?

Not into bin jousting? Why don’t you get some shopping in? Download has a village that you can access throughout the duration of the festival (but it is recommended to go check it out early). The village features all of life’s greatest conveniences, like showers and first aid, but also has a great market for all of your shopping desires. From custom-made clothing to drinking horns, you can find a wealth of amazing products! Come on, get yourself a souvenir.

6. The coolest camping experience of your life.

Download is in the middle of a field, so you can’t really do all the days without camping (don’t be that guy who only does one day. You’ll miss out). Whether you actually like camping or not, you’ll love this one. Doubling back to the community aspect of Download, nothing screams community like all camping together in a field. You’ll make best friends and join some epic parties if you camp out there. You won’t be sleeping anyways, so go immerse yourself in European metalhead culture!

You won’t be stuck at one stage, you have four to pick from. Each one bigger and bigger than the last…until you see the main stage, which is the most massive stage you’ll probably ever see. Nothing in America can compare to that godzilla. Pretty sure the bands have to do some serious cardio training before stepping foot on that. Imagining Clutch doing cardio before hitting the mainstage is reason enough to entice me to go.

Don’t worry, you won’t spend a week starving at Download—there is plenty of noms for all. Not only that, but the food caters to all different diets, so no one is starving. There is a large assortment of food, drink, even coffee to choose from. Try something new every day or eat the same thing everyday—the food is delicious! This isn’t your typical festival junk food. This satisfies cravings and keeps you sustained.

Take it from us, those vegan burgers and curly fries are the bomb.

9. Burning calories while on vacation (so it’s kind of healthy, right?).

Be prepared to walk. A lot. The campground is a hike from the actual music stages, so you’ll be making quite the physical trek. Besides, you’ll be jumping, moshing, screaming, and throwing horns up in the air. Think of all the exercise you’re getting? That’s a good enough excuse to travel to Download, right?

10. You no longer need to live vicariously through your European friends.

We are all connected to one another, whether it be via social media or just hanging out at a local coffee shop in a super tourist-ridden zone. When June comes around, you won’t have to sit around and just listen to your European friends gleefully tell their legendary stories of Download. You’ll be able to live it.

11. Cleaner toilets than most festivals.

12. For the mosh pit fans, there will be plenty. Likely even a rowing pit for Amon Amarth.

Download festival is synonymous for pits. Walls of death. Rowing pits, too. If moshing is your definition of a good time, then you’ve come to the right place friend. There will be plenty of bands encouraging your moshing compliance this year!

Mainstage will be home to Slipknot, Tool, and Def Leppard—the ultimate array of the genre. The Zippo Stage will have Rob Zombie, Halestorm, and Slayer headlining. The Avalanche Stage hosts Me First and the Gimme Gimmes, Simple Creatures, and Enter Shikari. Last, the Dogtooth Stage will have At the Gates, Carcass, and Municipal Waste. Why haven’t you bought that plane ticket yet?

Festivals give bands the freedom of doing something wild. Pyro, effects, dancers, a special set. You name it, bands are probably doing it. You will never see them perform anywhere else quite like they perform at Download.

15. Even Die Antwoord is playing.

South African artsy, weird, and super sick band Die Antwoord is surely going to have a visual extravaganza at Download Festival. A little bit of hip-hop might just be the spice needed, too.

16. Every metal genre you can imagine in one place.

Just look at the lineup, every facet of the genre is represented. Something for everyone.

Music isn’t the only fun you can have at Download. The WWE NXT UK stage is making its debut in 2019! A whole host of NXT UK superstars will be slamming their way into full-sized ring bouts in the main arena. Go ahead and be a part of WWE history, as all of the matches will be taped and aired as part of the weekly NXT UK show on the WWE Network.

18. Not into wrestling, but still need a break? The Side Splitter Stage has your covered.

From hilarious stand-ups, circus performers, and musical comedy, The Side Splitter Stage is your chance to take a bit of a chill before heading back into the music zone. Plus, diversity is great, and so is British humor.

19. Alien Weaponry is playing, and if you don’t know these kids by now, you need to.

Māori band Alien Weaponry from New Zealand has been sweeping the metal world with their powerful sounds and intense performances. Oh, and did we mention that they’re all kids? If you haven’t yet seen Alien Weaponry live, you really are missing out. Download Festival is your chance! Go!

20. You got something better to do?

Really, what else do you have going on that beats a European trip over to Download Festival? The experience is unlike any other, and as a metalhead, the regret of not partaking will be worse than the hangover you’ll endure on the last night.