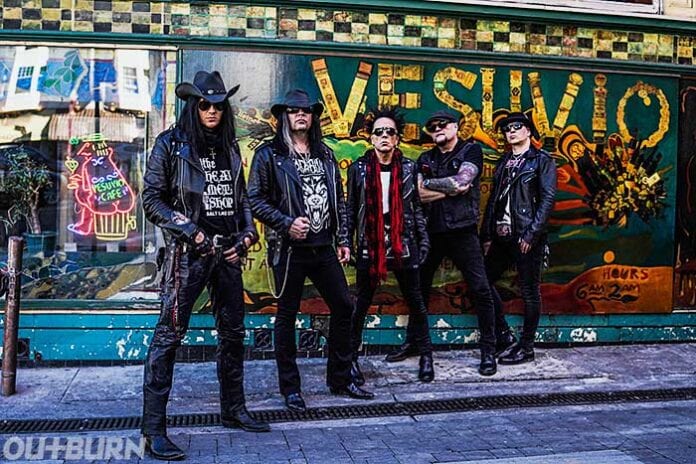 PHOTOGRAPHS AND FEATURE BY ANABEL DFLUX

Finland has long been an iconic hub for rock and metal music, from the gothic to the heavy and even the symphonic. With the likes of Nightwish, HIM, Children of Bodom, Apocalyptica, and so many more ensuring Finland’s place on the international map of popular bands, there is no wonder that there is quite a demand for Finnish rockers to find themselves back on United States soil. The 69 Eyes are no exception to this rule, and their long awaited return to the States marked an exciting point in music history.

The 69 Eyes stand out from the aforementioned bands quite a bit. If anything, I find that their affiliation with the Finnish rock world is actually the pinnacle of it. Having been a band for a whopping 30 years, these Helsinki vampires made their grand debut back to the US last year after a decade away. Keeping up with the momentum, the vampires were back once more this year, and I got to join them on tour as their photographer. The 69 Eyes were accompanied by labelmates Wednesday 13, Sumo Cyco, and The Crowned.

Before we get into the nitty gritty of it all, let’s talk about who The 69 Eyes really are. “Conceived in Finland in 1989, dark rockers The 69 Eyes have come a long way and shaped the genre of ‘Goth ‘n’ Roll’ like no other. With several platinum selling albums like Blessed Be and Paris Kills released around the millennium, the quintet not only reached #1 of the single and album charts in their home country of Finland, but also plunged the world into their sinful cosmos of love, death, and eternal melancholy, and outlived any other band emerging from the goth hype of the early 2000s,” writes the band’s official website. Most recently the band celebrated the release of their newest record West End, featuring top-notch guest vocalists such as Cradle of Filth’s Dani Filth, Wednesday 13, and Beastö Blancö’s Calico Cooper.

Now, back to business.

An alarm ringing at 4AM jerked me out of bed as I rushed over to LAX to catch a flight to Denver, joining the band at their Oriental Theater show. Prior photography work commitments kept me from accompanying the band at the start of their tour, so midway would have to do! Colorado greeted me with an unusually warm day for the season, complete with an absolutely gorgeous theater to work in. The crew on this run were splendid. It was a welcome sight to see Jess, the merch extraordinaire. I was immediately introduced to Gigi the tour manager, Ernie the drum tech, Wes the guitar tech, and the rest of the crew that made this tour move forward. Thus started the journey.

Each evening consisted of the same routine—soundcheck, the fan’s meet and greet, and showtime. The set list consisted of some key staples of the band’s career, such as “Brandon Lee,” intermingled with popular songs from West End—a clever mix of new and classic. Fans were deeply enthralled by the Finnish vampires’ abilities to command attention on the stage, captivating audience members with gothic melodies of love, loss, and the darker side of life.

Jyrki’s vocals immediately capture with deep, edgy singing reminiscent of an entirely different time in rock history. Partner that with a grand stage presence and an immaculate performance style, and you have the perfect formula for a delightful evening. Bellowing out deep, brooding, and romantic vocals to the crowd below, Jyrki could often be caught leaning in very close to the adoring fans below his feet, especially at the more intimate venue stops.

Drummer extraordinaire Jussi 69 blew the crowd away with his percussion antics. His extravagant performance has gained notoriety internationally, and for right reason—the energy is electric, it crawls up the walls and around the halls of a venue, no crevice left untouched.

Guitarists Bazie and Timo-Timo follow well in suit, with their personalities leading the forefront of every note. It is evident how much Bazie enjoys interacting with the audience, often coming forth to perform right for the devil horn hands below. Timo-Timo always demonstrates the most mesmerizing spins and dance moves we’ve ever seen, while still playing his guitar to absolute perfection!

Of course, who could forget the band’s phenomenal bassist Archzie, without which The 69 Eyes would not be whole. Archzie is one of the first to set forth on the stage in the eves and riles the crowd up immediately upon his arrival.

Behind the scenes, the band and I would go explore our current destination and find unique spots to shoot in to commemorate the time spent there, followed by nightly backstage candids. Tour photographers do far more than capture live performances, the job description expands to capturing the essence of the adventure—content creation expanding beyond just the expected images. As such, the camera was permanently strapped to my side.

Colorado was followed by a long trek in a confident attempt to reach Seattle, Washington, stopping in Salt Lake City, Utah, for a break. Unfortunately, the team were reminded of the risks involved in touring in the winter months, and we proceeded to find ourselves trapped in a snowstorm within a handful of hours. Luckily, our humble abode was a full tour bus, complete with heat, electricity, a kitchenette, bunks to sleep in, a back lounge, and a bathroom. Otherwise, the snow delay would have been more on the miserable side. Our bus driver did manage to drive us to a truck stop. The white powdered wasteland outside of the windows gave Jyrki and I the spark of inspiration, and we quickly ran out to snap some shots in the snow.

Unfortunately, the storm delayed the tour to a point at which the Seattle date of the show had been cancelled, as the highway was closed and we were trapped. Many hours later upon the road’s reopening, we trekked along to Portland, Oregon.

Portland certainly kept it weird alright, in the most eye catching way. Unique shops and buildings adorned each street, with the products sold inside just as memorable as the location itself. The theater was set in an absolutely stunning building, very fitting for this goth rock group. The daytime kept true to our new routine of exploring whenever the bus halts, with Jyrki taking me on a trek around the streets by the venue and expressing the history of the monumental place. I eventually swapped traveling with Jyrki to explore with Jussi, as we found ourselves in coffee shops and bookstores, aligning well with his interests and enthusiasms! By evening, fans had begun lining up around the venue and meet and greet VIPs eagerly awaiting their opportunity to meet the band. The show commenced with a visit to a famous Lovecraft themed gothic dance club, a must-see for those who partake in the subculture.

I had been lucky in being able to see many friends on our various stops around the country, but nothing was more exciting than visiting three close friends who had become family to me on their home turf in Redding, California. The lovely Lumgairs and their wolf Rogue (you heard me right. The wolves I photograph? Well, one of them lives in Redding!) came to visit for our day off in this small Northern California town.

San Francisco was the next memorable stop on the list, for many reasons (one of which was the bus’ ability to maneuver around those tight streets). San Francisco was a gold mine for our daytime photography session, with all of The 69 Eyes eagerly showing me their favorite parts of the city, with a full history to boot! Jyrki himself had published a travel and rock ‘n’ roll adventure book about San Francisco a couple years ago, and had a blast taking his band and myself through the Beat writers’ cornerstone places in San Francisco’s North Beach. Many iconic bars, shops, and monuments found their way into our photo session as we traversed the steep hills and beautiful painted lady houses.

Despite the general difficulty of commuting to San Francisco, parking your vehicle, or relying on public transportation, the venue was jam packed with very excited fans, showing the loyalty and dedication the listeners have to their favorite Finnish rock stars.

West Hollywood, California was next up on our list, of course. How could one miss the Sunset Strip, let alone the iconic Whisky a Go Go music venue? Jyrki was very much at home on these famous streets, being a frequent visitor to the City of Angels both of his own accord and with his solo act Jyrki69. Mutual friend and brilliant videographer Vicente Cordero of Industrialism Films was called in to film the event, from visiting the landmarks when the sun was out to rocking out when the sun went down.

As one could imagine, the Hollywood show was star studded in attendance, from manager Dez Fafara, his beautiful wife Anahstasia, and son Kaleb, to the band members of DevilDriver, Peter Murphy, LA Guns, Faster Pussycat, Jinjer, Black Veil Brides, and many more. The show continued forth at the Rainbow just down the way, with the entire rocker cast making their way to private booths at the most well-known restaurant in music history. Even beyond the musicians and their model friends that were present, the show was sold out and hit capacity!

From a world famous venue to a more intimate experience, Brick by Brick in San Diego was up next. As much as some of the days began to blend together, this show was pretty memorable for all of us. During the meet and greet, one couple surprised us as much as they surprised each other—a lad got down on his knees and proposed to his lady right in front of the band! Talk about a legendary proposal, met with claps and praise from the band members themselves when she said yes.

Unfortunately, I had to take a pause from the road at this point to fly to New York City to present my photography on the stage at a conference in Manhattan, reluctantly leaving my newfound family behind. However, the later dates of the tour proved equally wonderful for my Finnish friends, with the likes of Bam Margera making a visit!

This is certainly not the last we’ve seen of the Helsinki Vampires. They will be back, for the craving of the fans will certainly pull them to America once again.