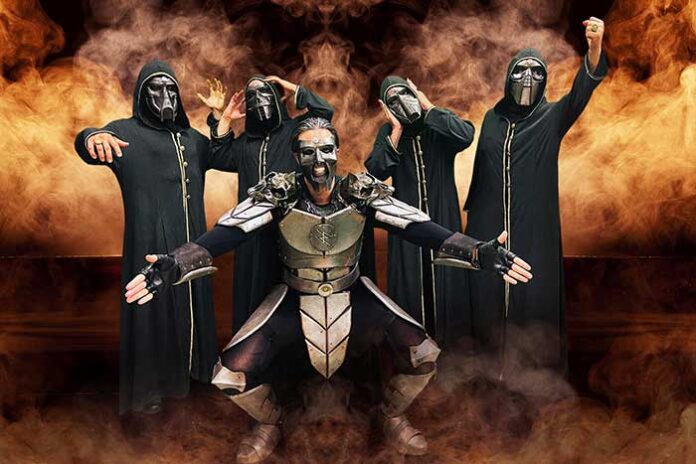 WATCH THE NEW MUSIC VIDEO FOR “THE DEVIL SMILES” FROM SUPREME UNBEING ONLY ON OUTBURN.COM

SUPREME UNBEING is a mysterious five piece metal band led by vocalist/prophet Zac Red, with his fellow prophets D.Vine (Lead Guitar), D.Sciple (Rhythm Guitar), Unknown (Bass) and Al Mytee (Drums). Although the band just recently transformed from animated characters into real flesh and blood entities, their impact has been felt in the physical domain since the release (October 2020) of their debut full-length album Enter Reality.

With all the success, the band’s greed has started to grow even further, to the point that they recently sold their souls to the Devil in order to reach a broader audience. The Devil betrayed the band (to no one’s surprise!) and left the band to rot in their own greed until April 1, 2022, when the band releases their fourth, devil-fooling, single “The Devil Smiles” from their upcoming, second full-length album Enduring Physicality (to be released 5.5.22).

“As the population is ever-increasing, people grow up, and behave as lifeless puppets programmed to think and act in a certain pre-disposed way thinking that publicly recognized success is the aim of their lives. Yes, we all long for success, and everyone can reach their success. But there is no easy way to success, you have to work hard, be focused, and dedicated to your cause, if you want that spotlight to shine on yourself, and bask in the perceived glory of success. Some people try to cheat their way in life, cheat their way to success. How far will you go to reach your success? Will you make the Devil smile?” – Zac Red