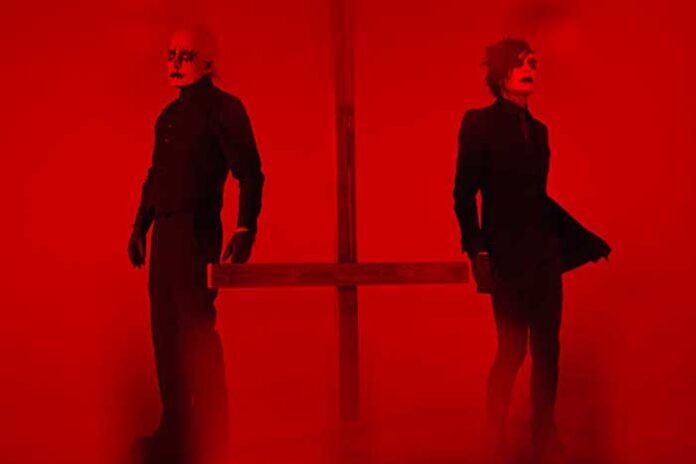 WATCH THE EXCLUSIVE PREMIERE OF THE NEW MUSIC VIDEO “ASHES” FROM NOT MY GOD ONLY ON OUTBURN.COM

The pair are no strangers to working together, having both served as live band members for the other’s projects — SKOLD as the guitarist for PSYCLON NINE and Bellum as the keyboardist for SKOLD. However, NOT MY GOD marked their first artistic collaboration, writing and recording together on a studio album.

“With ‘Ashes’ we wanted to take a step away from contemporary methods of songwriting. We wanted to assemble an artificial world from fractured pieces in which the bruised and broken would give rise to something resembling beauty.” – Nero Bellum

SIMULACRA serves as an ominous answer to the bellowing calls for more and can only serve to satiate as SIMULACRA is nothing short of a masterpiece. The album’s ten songs showcase the full range of SKOLD’s vocals as he channels a confidence rarely found in modern times paired with the raw, cinematic soundscapes and modular synth laden riffs from BELLUM.

The “ASHES” video (directed by Vicente Cordero / Industrialism Films) is slated for an imminent release. The song oscillates between something inhospitable, menacing and beautiful all while treading new ground.

SIMULACRA will be released by Metropolis Records and will be available worldwide on CD, a limited edition Vinyl and all major streaming services on October 15th.