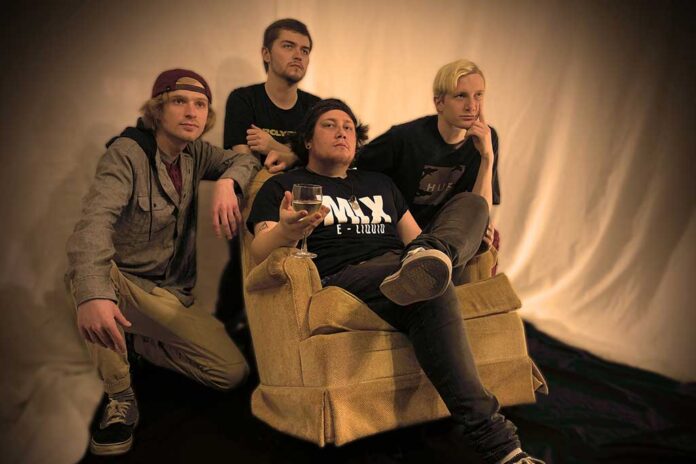 New Age Affair deftly applies their broad array of influences to their work. Post-hardcore, punk, and rock notes are all discernible, with pertinent lyricism, hook adorned riffs, and a grounded accessibility all defining Paradise White, out now on Manic Kat Records. Here, the South Dakota band gives us their insight into each track on their latest album.

“1-6-2” is a song mainly focused on mental health. It’s almost supposed to be chaotic and a little scatter brained.

“Brown Eyed Bitch” has a meaning that is fairly self-explanatory. The song started as a riff that I had been working on and was kind of just messing around. That riff turned into the one you hear in “Brown Eyed Bitch.”

“Borderline” is the oldest song on this record. We wrote this song back shortly after the band had formed and we felt like it needed a home. It’s primary source of inspiration comes from boredom and a feeling of loneliness

“NLP” started as a lick Nate wrote. It slowly morphed into the song you hear now with the piano and all that good stuff. The meaning of this song comes from touring and being gone while our significant others and people we care about are back home.

“Twisted Youth” is one of the first songs I specifically wrote for Paradise White. I wanted to write a song that was anthem like, a song where everyone could sing the word and we could all be as one…“The Twisted Youth.”

“New Tattoo/Tennessee Lovin’” is one of my favorites. I wanted to write a pretty piano song but I didn’t want a boring pretty piano song on the record. So, I decided to write a boogie-woogie and toss it in there. The song shows the parallels that some people can have, it’s supposed to show how they can care about one thing but act on another.

“Animal” is another older one. This was written about two years ago and is mainly about feeling trapped and forced into things and not being able to do what you want.

“Drugs,” despite how it sounds, is an anti-drug usage song. The modern world seems to glorify those kinds of things so we wanted to write a song that did the same thing but with a different message.

“Truth of Me” is a song about liars essentially. It’s basically the concept of no matter how high you build yourself up on lies, it will all burn down eventually.

“Alone” is basically an oxymoron. It’s about a person that hates feeling alone but is always alone because anytime they start to feel that way or the going gets tough, they mess everything up in their relationship.

“Black Tea” is about people with false identities, two faced individuals and backstabbers. It hits very close to home for everyone in New Age Affair.

“Like a Dream” is a song that’s about not caring about little things that happen in life, while also sounding like a dream, almost chaotic and sporadic.