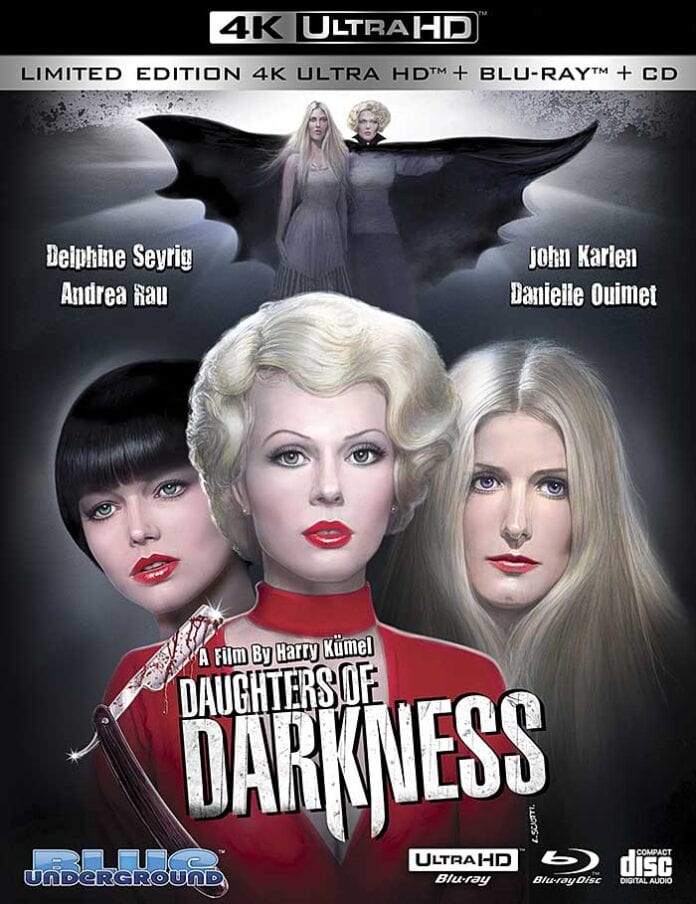 This release has nothing to do with our editor Jeremy Saffer’s own, recently released photo book of the same title, although they both share a number of similarities with their depiction of gothic atmosphere and strong, dangerous women.

No, this Daughters of Darkness is a 1971 horror film that serves as one of the foremost examples of the vampire picture as high art eroticism. Director Harry Kümel wasn’t particularly known for his work in genre film, with Daughters of Darkness existing more as a commercial effort, though absolutely not without its own breathtaking critical merit. This is due to many things, but in particular its due to how well Kümel brings together symbolism, cinematography, story, and performance into an intoxicating brew that still manages to inspire so many years after its release.

The film follows a young newlywed couple, played by John Karlen and Danielle Ouimet, that discover some secrets about each other while spending their post-elopement “bliss” in a nearly abandoned hotel by the ocean. The marriage between Karlen’s Stefan and Ouimet’s Valerie seems to be a rushed arrangement between two very attractive and sexually charged strangers, as it’s revealed that Stefan possesses not only a wandering eye but a vicious mean streak. The pair crosses paths with the bewitching and mysterious Countess Bathory during their stay, and it isn’t long before Valerie is put under Bathory’s spell, as it seems that the Countess entertains desires of replacing her current lover/companion/servant Illona with a newer model posthaste.

Kümel and his co-writers play fast and loose not only with the Bathory legend, but with vampire lore on the whole. Sunlight is still a killer here, but garlic, crosses, and fanged teeth make no appearances, and this isn’t to the film’s detriment. Daughters of Darkness is all about atmosphere and dread, in addition to its exploitable elements. Sure, there’s plenty of nudity and sex on display here, but it’s heavy on beauty and actual eroticism, in contrast to much of what was being shown at sleazy drive ins of the day. Similarly, the violence is shot with an artist’s eye, the sort of Euro-cult style that was already being felt in Italy during this time.

There are many vampyric and horrific influences that permeate Daughters of Darkness, from the “lesbian vampire” fiction of Joseph Sheridan Le Fanu’s Carmilla to the works of Edgar Allen Poe. It’s easy to see how movies such as this one also influenced the musical works of a band like Cradle of Filth, as well. There’s a certain appeal here that can hit on multiple levels for a variety of people. For example, a lot of soundtrack geeks and hip-hop heads have pointed to the film’s brilliant score from Francois de Roubaix as one of the finest (and sample-able) slices of layered, groovy jazz of the era.

We’re getting ahead of ourselves a bit, however, because we need to return back to the film proper and discuss Delphine Seyrig’s performance as Countess Bathory. The art house legend and feminist icon is magnetic and without peer as she commands the screen with equal parts glamour, charm, and menace. This isn’t to minimize the impact made by other icons of the industry that have portrayed Bathory over the years, particularly Ingrid Pitt, whose work for Hammer is some of the most influential of the day.

Seyrig is just in a different class here, coming across as predator and protector, a savior, mother, and lover all rolled into one. Much has been written about Seyrig channeling screen icon Marlene Dietrich in her performance, and that definitely comes across, but she also doesn’t steal the film away from her co-stars. Karlen grows frighteningly unhinged as the film moves along, becoming more possessive and violent towards his new bride, who we the audience see as being stuck in what’s essentially an increasingly dangerous situation of domestic violence.

Ouimet, to her credit, doesn’t play Valerie with a broad brush as victim/wallflower, but instead takes these tropes and balances them with a spirit and individualism that struggles to separate itself from Stefan’s grasp, even as Bathory’s influence grows more and more powerful. The Canadian actress is called upon to bare pretty much everything for the role, but it feels natural towards the simple yet effective story. This could’ve easily been a pitfall for Ouimet, but the actress’ performance goes beyond simply capitalizing on her natural beauty during the (rather explicit) opening sex scene, and leaps over that trap with a performance that resonates.

Technically, Daughters of Darkness is sumptuous. The framing here and use of shadows is evocative and cut from the cloth of gothic horror class. The film’s cinematography and countryside location shooting melds with that aforementioned Roubaix score to create a one-of-a-kind mood, and this is heightened even more by Blue Underground’s definitive hi-def presentation. The company handled previous DVD releases of the film, which looked great, but this package really takes the proverbial cake.

Daughters of Darkness is released here in an UltraHD 4k scan from the original 35mm negative, together with a similarly gorgeous standard Blu-Ray, as well as a CD of the complete score by Francois de Roubaix. I can’t imagine anyone arguing that this isn’t the absolute best Daughters of Darkness has looked or sounded in any format, as the image pops with absolute clarity. I also know that I’ve used a lot of adjectives here in this review, but the saturated colors look absolutely breathtaking. This is a film that uses a lot of blacks and reds, and there honestly wasn’t a moment where I wasn’t taken aback by how good this thing looks with a new restoration.

Both discs come with audio tracks in French and English with corresponding subtitles in English, French, and Spanish. It’s a region free presentation, with a Dolby Atmos audio mix that sounds great, without any drops or other technical issues to report. Extras from Blue Underground’s original DVD release are carried over here, including two audio commentaries, one with director Harry Kümel and the other with John Karlen and journalist David Del Valle. Location visits, trailers, radio spots, and a still gallery are also included, together with two brief interviews with Danielle Ouimet and Andrea Rau, who plays Illona in the film.

The new extra on here is worth double dipping for anyone still on the fence about this set, as it’s a feature length commentary from author, critic, and editor of Diabolique Magazine Kat Ellinger. Her insight and knowledge is at its predictable level of exhaustive, entertaining, and informative, as she’s one of the most engaging film journalists out there today. Ellinger’s love of the film is obvious, as she not only hosts a podcast titled Daughters of Darkness, but has even written a book discussing the film, so there’s likely no one with a better understanding that you’d rather have leading you on for the ride.

Finally, the whole thing is housed in a cool lenticular cover to sweeten the pot for what is essentially the finest version of Daughters of Darkness to be released onto the market and likely the only one you’ll ever need. Pick this one up. ~ George Pacheco