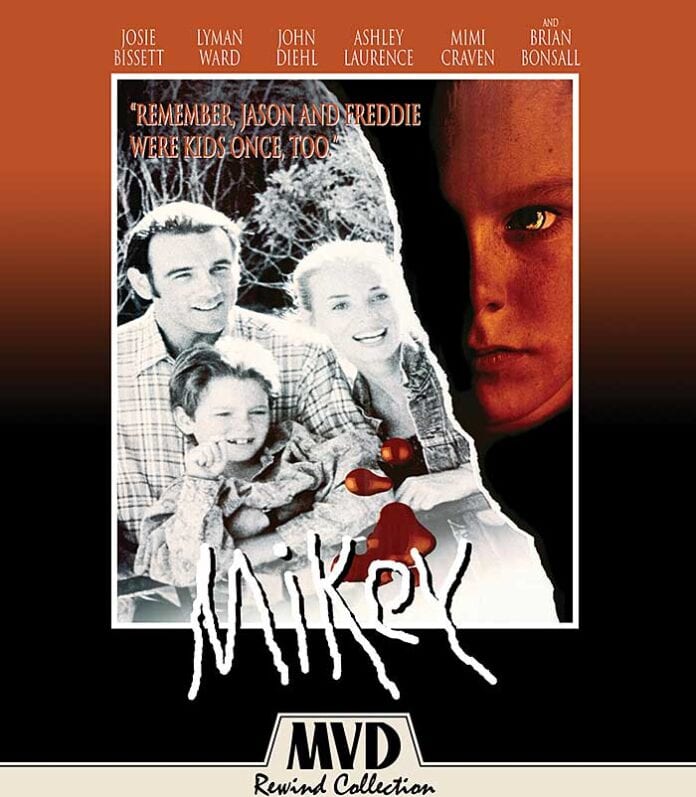 The “killer kid” subgenre of film possesses a rich history, with many fans and critics referencing 1956’s The Bad Seed as a jumping off point for future examples like The Good Son, Devil Times Five, and Bloody Birthday.

The 1992 film Mikey is certainly indebted to this pedigree, but the film’s screenplay by Jonathan Glassner more accurately drinks from the creative well of The Stepfather from five years earlier. This is due to the sociopathic and manipulative tendencies presented by the titular character, played with alternating charm and menace by Family Ties star Brian Bonsall. Mikey’s trauma as an abused child feels very real, and we do feel genuine sympathy for the shadowed past that’s only hinted at within the dialogue.

However, this is a “killer kid” film, and that means Mikey is also a very, very bad boy. He moves from adoptive parents to adoptive parents, attempting to ingratiate himself into a healthy family life, only to fall back into homicidal habits that start terribly and only become worse. Bonsall is excellent in the film, possessing the approachability that characterized Terry O’Quinn in The Stepfather—a likable nature that lulls both the audience and characters into a false sense of security.

The cast is actually pretty game across the board, playing up the psychological angle straight and with genuine seriousness. Of course, it helps that the ensemble contains both veterans and young professionals, but the standouts have to be Lyman Ward and Hellraiser actress Ashley Laurence. The pair play concerned teachers at Mikey’s school that slowly come to realize the child’s murderous past, and the writing on the wall that he’s likely to kill again. Elsewhere, Melrose Place actress Josie Bissett plays the teenage neighbor for whom Mikey develops a dangerous crush, while Nightmare on Elm Street alum Whit Hertford also appears as a young playmate.

Mimi Craven, who plays Mikey’s mom, is also from the Elm Street franchise, and the film plays this up a little bit in its tagline, that states: “Remember, Jason and Freddie (sic) Were Kids Once, Too…” To call Mikey a slasher is a bit misleading, although the blood does flow pretty good during some of the murder set pieces. It’s more of a psychological thriller with strong horror elements. The film is shot well, but is a bit drab in the set design department, coming across with a straight to video or television vibe, while the dramatic synth score from Tim Truman is serviceable, but not an instant classic. However, this isn’t enough to kill Mikey off as a recommended and late cycle, entry into the “killer kid” canon.

This Blu-ray from the MVD Rewind Collection looks nice, and it is probably a big improvement from the film’s VHS heyday in the early 90s. There aren’t any signs of artifacts in the image, and the sound is relatively clear. The subtitles do possess a spelling error or two, but nothing to really detract from the experience. The extras really drive home how much everyone seemed to believe in the project, as there’s a nice feature length documentary about the making of Mikey from soup to nuts.

The feature brings together much of the cast and crew, including Bonsall and director Dennis Dimster-Denk. Everyone is game to talk shop, and pretty much leaves little unturned as they discuss their (mostly good) memories about making the film. Sure, it’s a bit “talking head,” but that’s how most of these are, and the end result is anything but dry. Plus, it’s really great to see how Bonsall has aged since his sitcom days, and everyone’s storytelling is engaging about his or her experience on set.

So, call this one something of an unexpected surprise, a cool little horror flick that delivers the goods with some old-fashioned tension and well executed storytelling. ~ George Pacheco

Influences and Essentials: IMMINENCE In Their Own Words