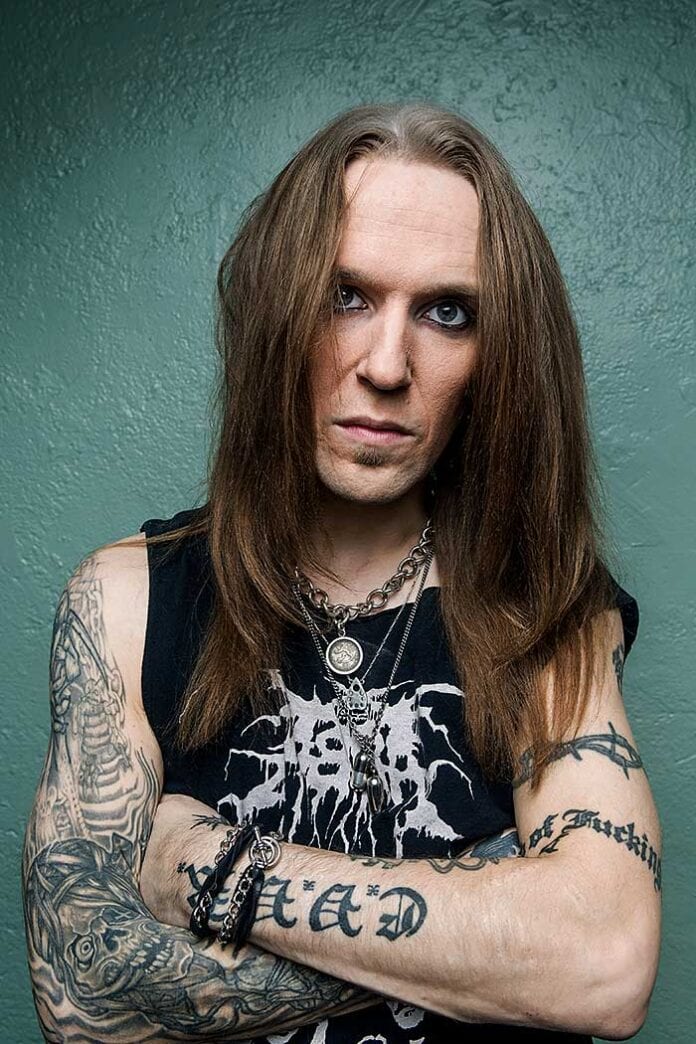 On the morning of January 4, 2021, the metal community learned the shocking news that Alexi Laiho had passed away. While it was said he was struggling with health complications for a long time, his death was sudden. He was only 41-years-old.

Alexi Laiho was born Markku Uula Aleksi Laiho on April 8, 1979 in Espoo, Finland. He started playing guitar when he was 11-years-old and formed his first band, IneartheD, with drummer Jaska Raatikainen when he was 14. Due to legal issues, the band officially changed its name to Children of Bodom.

From here, Laiho formed a profound legacy with the iconic Children of Bodom. Laiho has been featured in Guitar World’s list of 100 Greatest Heavy Metal Guitarists, which also ranked him among the 50 Fastest Guitarists, and Roadrunner Records ranked Laiho as one of the 50 Greatest Metal Frontmen of all time.

In addition to Children of Bodom, Laiho performed in numerous other bands, like Sinergy and Impaled Nazarene, and was a featured guest on many different projects, such as the Annihilator song “Downright Dominate” and Marty Friedman’s song “Lycanthrope.”

Alexi Laiho departed the world hopefully knowing that he left behind a tremendous legacy. Laiho changed our perceptions of extreme metal, inspired a new generation of guitar players, and all of his contributions to music are worshipped by so many people to this day.

Starting off with our favorite Children of Bodom song of all time, “Kissing the Shadows” has some of the craziest guitar parts in the band’s discography. The song includes one of the band’s best solos and even the riffing is insane. We especially love the part leading up to the solo—the keyboards morph into a spastic guitar frenzy, and the song goes back and forth between guitars and Janne Wirmen’s inhuman keyboards.

We always remember the music video for “Needled 24/7,” with the motorcyclist in the cage, the dancer on the silks, the fire juggler, and the guy with the crazy body modifications. Watching it for the first time when originally released, it was such a unique music video. It wasn’t just a bunch of metal dudes looking tough, there are so many different performances in this video and it’s extremely captivating. Next to “Kissing the Shadows,” “Needled 24/7” has to be one of our favorite Children of Bodom songs. The intro keyboards are probably the most intense opening we have ever heard in our entire lives. The guitar playing is unhinged and melodic at the same time. This song will get stuck in your head.

There is a reason “Hate Crew Deathroll” has remained a fan favorite after all these years—the melodies are absolutely addicting. Mixed in with the technicality of Laiho’s guitar, it’s no wonder this track blew so many minds back in the day and clearly proves Laiho was a genius guitar player and composer.

Another shadows song comes from the band’s first album, Something Wild. With this album, it’s obvious that the band was very young and not fully ingrained into its sound, but it truly is a gem in its special way. “In the Shadows” is one of our favorites because of the diverse influences—plenty of black metal and even some power metal in the riffing. It starts off intense and ends on somewhat of a monotone note, which works for the song. The varied influences almost give this track a progressive feel, something rarely heard in extreme metal at that time. “In the Shadows” embodies some of the best parts of Children of Bodom’s songwriting—beautiful melodies, intense brutality, and all of the ingredients that gave Children of Bodom its unique sound.

C’mon, this song has to be on the list! “Hear my apology, Fuck You!”—classic Children of Bodom. But seriously, this is such an angry song that represents the tortured high school moodiness perfectly. Since “You’re Better Off Dead” is more aggressive than other songs in the band’s discography, you have to be in the right frame of mind for it. Also, Alexi’s and Janne’s solos on “You’re Better Off Dead” are also some of the best in the band’s entire catalog.

“Warheart” is the best way to open up the Hatebreeder album, as the melodies will send chills throughout your entire body. At the same time, this song holds so much brutality. It’s absolutely crushing, and you’ll never hear another song like “Warheart.” It has that distinct Children of Bodom sound.

One of the reasons we love this song is because of the Stockholm Knockout Live DVD, as Janne played “My Heart Will Go On” on keyboard right before “Downfall.” This song is an absolute masterpiece. Even with the keyboard melodies, “Downfall” holds a ton of power and is also proof that Laiho’s guitar playing will be immortal and always influential. Beyond the solos, his rhythms are tight and his guitar parts are so unique.

We can’t have a Children of Bodom best song list without “Lake Bodom.” The backstory of this song—a group of kids were murdered on Lake Bodom and the killer was never found—is also the inspiration for the band name, Children of Bodom. This is another song that further proves Laiho’s legacy with fierce guitars, especially on the solo. “Lake Bodom” is amazing and will always be a fan favorite.

Impaled Nazarene is a Finnish black metal band that had Alexi Laiho join the band briefly on guitar—he’s credited as “Wildchild.” The album Nihil is the only one that features Laiho, and the guitar playing went up 10 notches on this album. There are definitely some gems from Nihil and here are a few.

Out of all of the songs on Nihil, you can hear Laiho’s signature style of playing best on “Cogito Ergo Sum,” specifically in the solo. It’s a short song but packs a lot of punch and makes it one of the best tracks on the album.

This song is special because it’s polished yet still holds that evil atmosphere, and you can hear Laiho’s signature guitar. What makes him really stand out in this band, especially on “Human-Proof,” is how he doesn’t change Impaled Nazarene’s sound too much. The guitars are amazing yet fit in with the song, and that’s what makes Laiho such a phenomenal guitar player—he can perform many styles and morph his guitars.

“How the Laughter Died”

“How the Laughter Died” has more of a rock vibe rather than a traditional black metal feel. It’s a sinister song yet it’s catchy. While it’s not Laiho’s most technical work, this song proves that even his rhythm guitar playing is completely solid.

Alexi Laiho was in Synergy with his then wife, Kimberly Goss, and the album Suicide by My Side shows how great this band was. Goss has a strong voice, and this album is packed with a ton of power.

“Spit on Your Grave”

“Spit on Your Grave” is a great way to start off Suicide by My Side. Take classic power metal, replace the dude singing with Kim Goss, and give the members a ton of caffeine and drugs, and you’ve got “Spit on Your Grave.” We’re shocked this band didn’t get farther, as this song in particular features some of Laiho’s best guitar work, particularly on the solo. Even after all of these years, we can listen to it and say, “Wow, this song is awesome!”

Next to “Spit on Your Grave,” “Shadow Island” is one of the songs we listen to constantly. The guitars are cool, distinctive, and something we rarely heard from Alexi. With a great mix of operatic and extreme, and Laiho’s growling vocals, “Shadow Island” is an awesome song then and now.

Outburn sends its deepest condolences to Alexi Laiho’s many fans, friends, and family.