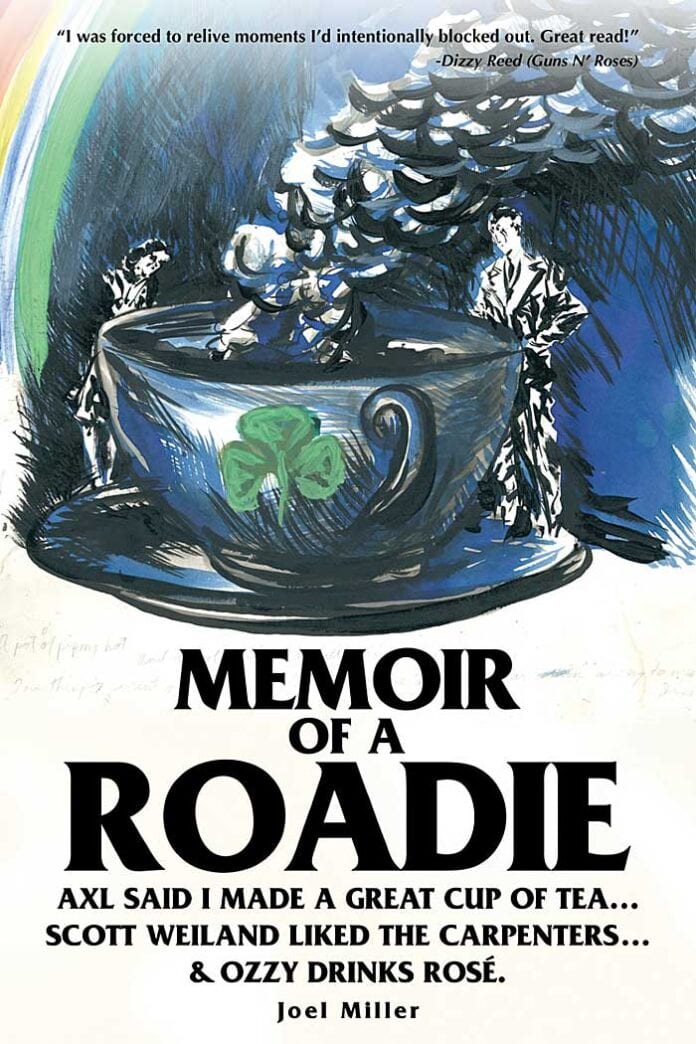 MEMOIR OF A ROADIE
By Joel Miller

Film nerds who stare with studious intent at the silver/TV screen scouring the credits for the names of second assistant directors, wardrobe consultant, and whoever it was who played “Police Officer #2” while everyone else bee lines for the exit or lunges for the remote might recognize the name Joel Miller. The 43-year-old was born in the UK, raised in Los Angeles, and is a minor polymath when it comes to careers in the entertainment industry. He started as a four-year-old child model and eventually became a creative cog behind the scenes, working as producer, writer, director, casting director, and in the art department on features, shorts, and documentaries throughout the 00s and 10s.

A few years before throwing his anchor down in Hollywood, Miller made his living in a vastly more nomadic and chaotic manner as a touring crew member for the likes of Stone Temple Pilots, Guns N’ Roses, Poison, and The Cranberries. This two-year span of employment from 2000–02 is the primary focus of his first book and offers rapid-fire details about the fumbling short-term romances, liberal intoxicant ingestion, soul-crushing monotony, secret code of snark, and bitter sarcasm that characterizes life on the road, especially as it occurred in an era when all arms of the music industry were flush with cash and ribaldry. It was a long-past era, 20 years back, before the internet and political correctness put the emergency brake on rock ‘n’ roll’s libidinous lifestyle as vintage Kiss and Led Zeppelin remember it.

As per its title, Memoir of a Roadie spends time setting up for the main thematic thrust by skimming through Miller’s childhood and teen years. These are notable for the fact that, as a result of his father’s work as an LA based classic car mechanic specializing in Jaguars, young Joel spent time in the company of auto collecting celebrities and famous folk. He also grew up across the street from Fishbone’s Angelo Moore, which appeared to play a cursory role in instilling the idea of a potential career in the music industry, even in the short term. A large part of this book—as with most biographies and life stories—revolves around an eventual coming of age and discovery of oneself. As such, Miller spills out the borderline legality of some of the money making schemes and gigs he engaged in as a young man, his grifting his way through college, underappreciated work on film sets, and the lack of life plan and direction that’s all too common to those in their late teens who haven’t had their career paths soullessly mapped out by helicopter parents.

It should be noted that Miller’s stint as a road dog was something he fell into by chance, not something that came about at the hand of deliberate skill, initial focus, or because he was someone who was particularly knowledgeable about, or intimately acquainted with, music’s inner machinations. This makes the fact that his first roadie gig was working for Stone Temple Pilots during touring for their fourth album, No. 4, especially charmed. Everyone’s got to get their start somewhere, but a connection established through his father got Miller his first gig. Anyone familiar with the business of being a roadie will note how horseshoes-up-the-arse lucky he was to score first-time employment with a multi-platinum act, more so considering he had no previous experience. Miller does acknowledge this luck as he embarks upon an almost day-by-day recollection of his time spent working setting up lights, then stage managing for STP.

As a result, his recollection delves into the minutiae of both life and work on the road. Given Miller’s focused play-by-play on a relatively brief span of time, it’s thankful that his writing style stylistically borrows from Hemmingway’s brand of short, punctuated bursts in which sentences are terse and to the point, paragraphs are linearly focused, and chapters are a handful of pages in length. This offers brevity—and therefore, tolerability—to the tales of drunken debauchery, the recanting of inside jokes, and the recollections of random off-the-clock adventures. Some of the stories, especially those concerning brusque conversations with his grizzled fellow roadies, are often not as humorous, insightful, or witty as he likes to think (a case of “you had to be there” plagues too many of these and many road tales). Others scratch the stupid antics itch just right—stories of a misguided romp through a favela in Rio and frolicking in the man-made lake created by The Cranberries’ truck driver taking out a fire hydrant are much more compelling for their entertainment value.

These days, as mentioned above, Miller is primarily ensconced behind-the-scenes in film. The seeds of his celluloid stint were planted during his down time on those initial STP runs. He reports regularly working his creative writer’s muscle in between nights on, and in, the piss. This eventually manifested in a various screenplays and manuscripts that the members of STP are either staring at cluelessly at present or have since used for bird cage liner. What makes Memoir of a Roadie greater than a series of alcohol fueled exploits (and there are a lot of them!) is Miller’s overall ability to remain humble. He writes equally about how good and bad he was at his job, he writes about knowing how lucky he was to skirt slogging it out in van tours for chump change by scoring a plush gig from the off, he seems to have no problem admitting when he’s wrong, fucked up, or gone too far, both on the road and at home. He even questions his ability as a writer while writing.

Ultimately, Memoir of a Roadie speaks to an early 20s dude learning about life, learning the parallels and differences between lifestyles that prize wanderlust and stability. Granted, he comes to his own discovery and the end of his roadie career at the hand of a family tragedy that would have shook anyone’s foundations, whether they were rotting away in a cubicle or traipsing around North America with The Cranberries. Its 500+ page length may seem daunting, but the layout isn’t jam-packed like a Tolstoy book. The bite-sized chapter chunks make it fly by making the book a good choice for those moments you’re in the mood for a quick burst of levity and coming of age disguised as shit-talking by the dudes who make rock concerts look like rock concerts. ~ Kevin Stewart-Panko