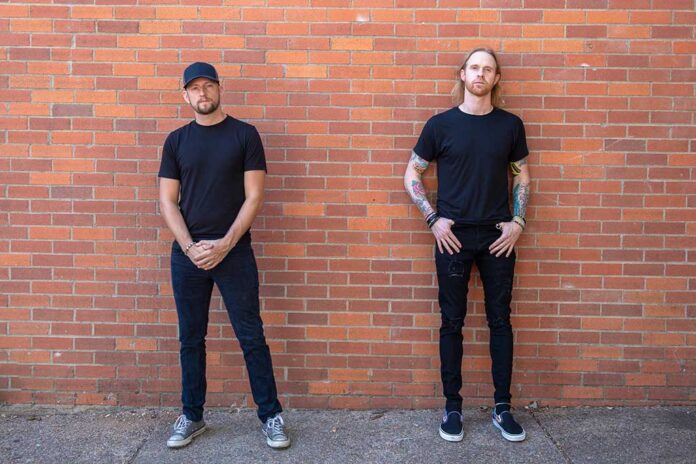 Lift the Curse blends scintillating riffs and soaring melodies on the new record, Rise with the Flames, with the Texan duo releasing a string of singles since last summer. “Believe” is one of the highlights of the album—a mesmerizing marriage of rock influences, with gritty and honest but abundant with big choruses and cascading instrumentation. The project of Ryan Hegefeld and Jon Yadon Jnr put songwriting front and center on the new collection, which has earned them praise from a dexterous array of music media across rock.

1. “Rise With The Flames” is the first song we wrote and released as Lift The Curse in April 2022. It’s a very meaningful song for us. The chorus lyrics say it all, “I’ll see you on the other side as I ignite for a better life. I will rise with the flames and I will touch the sky.” Our recording method was the same for the entire album. Ryan and I live about 100 miles from each other, so we write and record remotely. We’ve actually done this method for years and we love it. We both use Apple Logic for our recording DAW, and we share Logic project files back and forth until each song is complete. We have a lot of FaceTime and phone conversations about the songs as we roadmap and piece them together. It’s extremely collaborative. Whoever has the initial song idea (could just be one melody or one riff) will usually kick off the demo version of the song in Logic.

2. “Burn It All” is a really fun one because it’s one of two songs that we pitched our guitars and bass down more than usual (usually we’re using 6 string guitars in Drop C tuning). It is in the key of A, so we used a combination of 7 string guitars and the awesome Neural DSP Petrucci plugin to transpose our Drop C guitars down to A. It worked great! This was also the first music video we’ve ever done using a green screen. Shoutout to our good friend, Dustin Dow at NINE 23 MEDIA for putting us in/on fire via Unreal Engine 🙂

3. “Believe” is a song focused on the overwhelming negatives in life that can seem like quicksand. Life is hard for everyone, but there is always hope to improve any situation. This song is meant to be a reminder to never lose that hope and always believe in yourself. This was another super fun green screen video that we did with Dustin Dow. ALSO! Ryan rips the first guitar solo in this song! I can’t go without mentioning that 🙂

4. “Call It What It Is” is a song that we knew was going to be very special from the beginning. The lyrics, the melody, and the birth of the song came together very organically and very quickly. It’s a song that we did somewhat craft in the same room, where we tried the chorus in a few different keys and ultimately went with the higher one because Ryan has the pipes to do it. Quick story from that day… my best friend, Chase, lives next door and when we were trying the higher key I remember Ryan saying, “what if Chase hears us?” and I said, “let it rip, he won’t care!” haha. Ryan then proceeded to belt it and we decided to do the song in the key of D versus the lower option of C.

5. “Realized” is a super fun song for us. Sometimes we determine what kind of song we want to do next and we wanted a ’no rules/heavy song’ song for this one. We thought it’d be fun to have Ryan scream before singing for once. The breakdown was a large highlight for us in the song too. It’s incredibly fun to play live!

6. “Take Me Under” is a song of change. You are with a person for so long you have that comfortableness with them even if things aren’t good or healthy. Ultimately, moving on is the best thing for both sides. The chorus says it all, “Take me under, I can breathe without you. Eyes are covered, I can see the dark in you.” We shot this music video out at Ryan’s family ranch, which is a very special place for Lift The Curse.

7. “Same Old Story” is a song that we’ve had for a while, and we were really excited to record and release it. This music video was extra cool too because we had our good friends Cody and Marie star in the video as well as our good friend Deuce Wanier shot the music video. Thank you all! 🙂

8. “Down Inside” is a song where Ryan kept saying (and still keeps saying) that the pre chorus/bridge guitar riff is one of his favorite riffs that I (Jon) has ever written. Ryan said, “whatever else happens in this song will happen, but that riff is the highlight!” For me, I absolutely love Ryan’s lyrics and chorus melody in this song, “Follow your heart to the ends of the earth. March to the beat in your chest until it hurts.”

9. “Alive Again” is a song that we wrote back in 2017 that we always wanted to release, and Lift The Curse was finally the right avenue to record the song and release it. It is the other song on the album that we used 7 string guitars on like “Burn It All” tuned down to Drop A.

10. “Found The Bottom” has a lot of unique parts in it. It starts sounding/feeling almost more ballad-like, but then the verse riff is a head bobbing rocker into an energetic chorus. I like how the song flows in and out of clean & dirty guitar tones. We had a lot of fun with this song. One of the highlights for me is the guitar harmony section after the guitar solo that Ryan and I did.

11. “The Color Brave” is a song intended to be a lifeline for children of the world. A song Ryan dedicates to his kids as a reminder that life will have plenty of ups and downs, but they will always have this song to run to, to sing to, if they ever should need a glimmer of hope. We did a green screen video for this song with Dustin again, and he included real pictures & videos of our families in the video! Very thankful for Dustin doing that for us.

12. “The Debt” is another song that we’ve had for a while. It was finally time to record and release it. We are ultimately very happy that we waited because we gave it quite the overhaul. We sped the song up, added a brand new main guitar riff, added a brand new guitar solo, added extra screams, etc. The Music video was unique too in that we filmed our parts separately. We were running up against a tight deadline with the holidays approaching and couldn’t find the time to meet in the same location. We put our thinking caps on and figured out how we could each film ourselves and then I put it all together with a red video filter in Final Cut Pro. It was a very fun experiment, and we’re happy with how it turned out!

13. “Peace Of Mind” is one of our favorite Boston songs! Ryan covered this song a long time ago and we did it together in an old cover band, so we were excited to cover this epic song.

14. “The Christmas Gift” is an original Christmas song that Ryan wrote a long time ago, and we both LOVE Christmas so we decided to re-record it and make it new!

15. “Call It What It Is (Acoustic)” We always knew we wanted to do an acoustic/piano version of this song. Hope you all enjoy it!