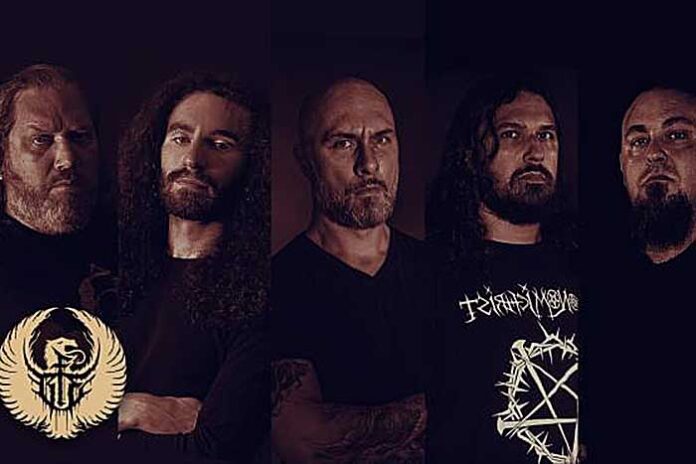 FETAL BOOD EAGLE’s debut album Indoctrinate will be released on February 25th, 2022 via Listenable Records. Rooted in both European and American styled death metal, Fetal Blood Eagle has forged a completely brutal record that will send a shockwave up your spine and crack your skull wide open so the squirrels can eat your brain. The band features Sven De Caluwé (Aborted) on vocals, Jim Gregory (Solium Fatalis) and Ryan Beevers (Unflesh, Solium Fatalis) on guitars, Lenny Patterson (Necronomichrist) on bass, and Kendall “Pariah” Divoll (Necronomichrist) on drums.

To celebrate the release of Indoctrinate, guitarist Jim Gregory tells us the band’s main influences and Fetal Blood Eagle’s essential songs to hear.

I heard this when it was brand new. It was so ripping and amazing to hear this, and it was my formal introduction to Judas Priest in 1990. To this day the guitar solo gives me goosebumps. The song has so many crescendo-like moments, and Halford’s vocals are insane on this. There is no song that is as metal as this track, and I’m so glad that they are still around to make heavy metal for us all. I will always be a huge Judas Priest fan. This track will always be the one that sends shivers down my spine, and I always wanted to make someone feel the way I do with my music as they did with theirs for me!

I don’t know anyone who plays death metal and wasn’t influenced by Death. This was my introduction to the band back in 1991. I read a review on “The Metal Detector” in Guitar World magazine giving the record three stars out of five and calling it names, and the author was a huge douche. Death was such a massive part of my life for so many years. I can’t remember a time when they did not influence me. This album is still very special and features amazing performances, and it saddens me knowing that Chuck and Sean are no longer with us. Their music is a permanent reminder of their immense talent and contribution to the genre.

I can’t mention Florida death metal without mentioning the Swedish death metal influence. For every technical or speed driven riff offered by an American death metal band, the Swedes offered groove, melodic passages, and some seriously sick brutality. Also, Crawl’s lyrics are really sick. The fact that English is a second language for these guys makes them all that much more impressive. This band has influenced everyone I know. I can’t even remember how I got my copy of Clandestine back in 1991, but if I were to venture a guess, I bet I stole it back when stealing music was a crime called shoplifting.

To this day, Obituary is one of the coolest bands to go see live, and they are tight as fuck. I actually saw the band members themselves introduce the music video for this song on Headbanger’s Ball back when it was brand new. I thought they were the heaviest band I had ever heard. Imitating John Tardy’s vocals is one of the most fun things Sven and I do together, and if you listen carefully to Fetal Blood Eagle, you will definitely hear Sven blurt out an Obituary style scream or two.

I had to mention a thrash band because all thrash music has had an integral influence on not only me but also many death metal bands. With that being said, the one that I always found myself listening to is Sabbat’s “Dreamweaver.” Andy Sneap, before he was a big famous producer, was once a thrash metal titan on guitar, and Martin Walkyier’s ripping vocals are unique and sick as fuck even by today’s standards. I always wished they would rerecord some of their albums or make something new with Andy’s current production behind it. It was always a shame to me that there are only three albums with the Sabbat name on them. I own all three original albums, and their talents still shine through to this day when I listen to it. Plus, “The Clerical Conspiracy” just fucking shreds, dude.

This song is the first track on the album and features writing by Ryan, myself, and Sven. I think it is a great way to fire off the record and is a nice speedy song. It’s also a bit of a bait and switch since none of the rest of the songs on the album are anything like it! It’s a track about the survival video game Dead Space. The intro itself (the “ha ha ha, Oh!?”) is actually a long running joke with Sven and myself. We would randomly talk, and he would say the line to Ryan and myself. It is from the movie Silent Night, Deadly Night Part 2. Sven and I have a huge affinity for horror films and that includes insanely bad ones. I’m a B-movie aficionado myself, so when the demo popped up with that audio clip, it cracked up the rest of the band and was just the kind of way we wanted to introduce the band to everyone. Something fun but also brutally heavy!

So here’s a gear shift, as track two of the album comes off the heels of one of the fastest, most hyper songs on the album right onto the groovy OG death metal song that felt like a great way to let everyone know that they aren’t all turbo charged blasters of songs. The title actually comes from when I was deployed with the Air Force, and we worked with a man nicknamed “Fievel.” And yes, he looked like the cartoon character of the same name. Fievel was very thin, wore thick black framed glasses, and had a very easygoing personality. He was one of my good friends, and I always enjoyed working with him. He also was soft spoken, which is why what came out of his mouth was so shocking. Someone on the bus yelled out something stupid to him, and Fievel quickly shouted back, “I’m going to gouge out your eye and hate fuck your face.” There was a pause, and then everyone in the bus exploded in laughter. So, when I wrote the song I called it “Hate Fucked Face” in tribute to Fievel. When Sven finished recording his vocals, he texted me, “’Hate Fucked Face’ is a winner!” Which made me laugh…a lot!

The opening riff in this song might be one of my favorites on the entire album. I wrote it and was thinking to myself, “If I saw a dumpster and abortions were being dumped into it actively, what would that sound like?” The song is groovy, heavy, and is a lot of fun to play. There really isn’t anything more complicated than that with this band and what we do. If you fail to see the humor in it, then obviously you are all a lot more mature than us. Congratulations. What has been really funny about making this album is seeing the reactions to the titles and names. You think you hate it now, wait until you read the lyrics. See you on tour, shit lips!