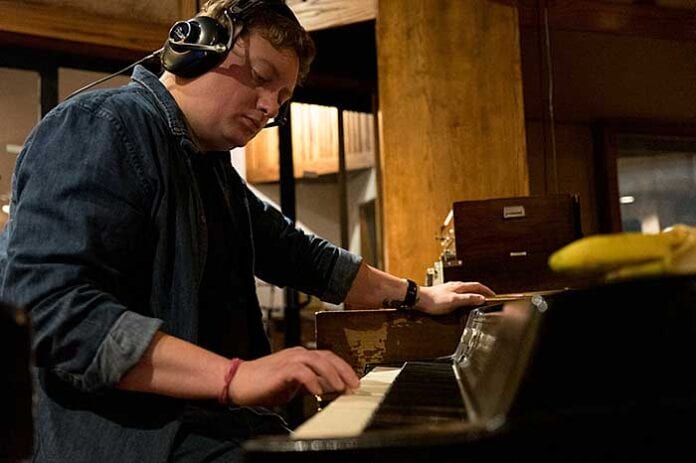 LISTEN TO THE EXCLUSIVE PREMIERE OF “TOBI,” ‘WHAT WE GIVE,” AND MORE FROM LEWIS’ SON ON THE FLOOR ONLY ON OUTBURN.COM

Christopher Lee Lewis (moniker LEWIS) is an American songwriter, musician, and producer. He grew up in Oblong, Illinois (pop. 1,391) and began his solo career in 2019, having previously been the frontman for the punk outfit, The Kinison. Starting on drums from the age of four, Christopher has been involved in a number of groups since ranging from the mellow pop rock group, Pioneers, to singer-songwriter acoustic duo Canada.

Christopher Lee Lewis on the track “What We Give”
“‘What We Give’ was written about the week of November 4th, 2018. That Monday, I had finally decided to end my decade-long marriage to alcohol and detoxify myself. During my peak of the tremulousness on Wednesday evening, I started to hear the buzzing of helicopters hovering above my apartment complex, a close friend rang and asked me to turn the news on. Borderline Bar and Grill, a local country-Western pub had been shot up, later referred to as the Thousand Oaks Massacre where 13 people, including the gunman, lives were taken. By Thursday, my entire neighborhood was eerily still; FBI agents in hazmat suits could be seen collecting evidence during my morning commute. The windows of the bar facing the freeway were smashed out by patrons fleeing for their lives. By that afternoon, smoke was billowing through the hills to the North-West and East which was the beginnings of the Woolsey Fire which went on to burn nearly 100,000 acres over several days. From my personal withdrawal to the bloodshed to inferno all in 96 hours.”

Throughout Christopher’s career, he has recorded several studio full-lengths, three EPs and one live album. His 2019 EP LEWIS, released through his own Sona Baby Records, is the first release to showcase his musical talent across all instruments. Christopher’s Mom said: “It’s his best drumming since 1987!”

LEWIS recorded the forthcoming full-length album at fabled studio Dave’s Room in Los Angeles with Grammy nominated engineer/producer Paul Fig, for release in 2020. A prolific artist, he’s been known to write up to thirty songs in a weekend.

Having played at Coachella, multiple Warped Tours, and Wembley Arena, Christopher is no outsider to being on the stage. You are sure to see him live soon at a venue near you, as soon as that becomes a thing again.

Son On The Floor will be available on LP and download on August 21st, 2020 via Sona Baby Records.

Exclusive Premiere of NEVER YOUR ZERO’s New Video for “Love or...