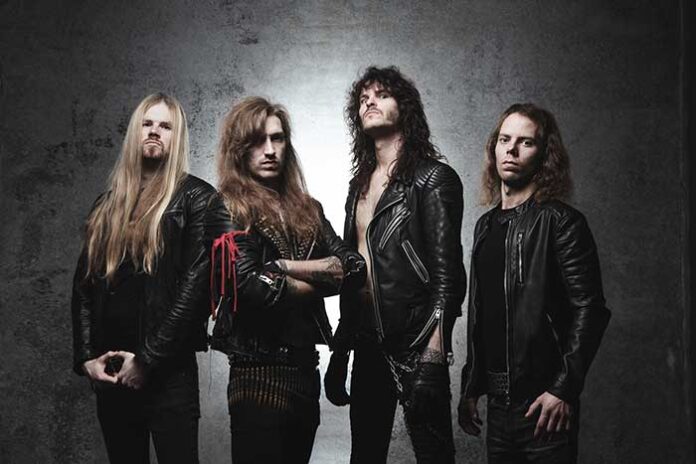 EVIL INVADERS’ Shattering Reflection, released today via Napalm Records, promises to be a game changer for the Belgian four piece, as the band finds their own formula, twisting heavy metal into yet another extreme direction. Shattering Reflection is a monster of an album that indisputably proves that, within in a new generation of metal bands, Evil Invaders has developed and matured record after record, just like classic metal bands of yore.

To celebrate the album’s release, guitarist Max tells us the band’s biggest influences and Evil Invaders’ essential songs to hear.

I am a die-hard fan since they released their first EP in 2016. The combination of old school sound, fast riffing, and complex song structures is just perfect in my ears. I can definitely say that their records had a huge impact on my songwriting. They manage to sound like the true 80s in 2022, and I think that’s something not a lot of bands can pull off nowadays. Vulture kills!

I’ve been a huge fan of Asphyx for ages. They are the kings of heavy sound in my opinion. When they dropped this single, I was like “Fuck, this is the real deal!” It sounds like a gigantic tank is rolling right over you. I have seen them live a dozen times now and it never gets boring. They always wreck everything that’s in their way. Definitely a must see live band in my opinion.

Exciter always gets my blood pumping. “Feel the Knife” is the pure essence of being badass. The riffs and the vocal lines just slay and makes me wanna burn entire cities to the ground. Pure raw energy blasted into one track. I remember driving my car way back in the day and the song came up in the shuffle on my stereo, and suddenly I was driving way over the speed limit, banging my ass off to this track.

This is definitely one of my favorite songs on the new album. It’s pretty straightforward and right in your face! Most of the songs on Shattering Reflection are quite complex structure-wise so this one stands out a bit. It definitely has a strong old school vibe going and represents our influential roots quite well.

“Tortured by the Beast”

Quite different from the stuff we do nowadays, but I just love this song from beginning to end. Cool riffing and catchy as hell vocals! Simple but very effective. I am always happy when we bring the song back into our live set because it’s so much fun to play and get nuts to an Evil Invaders classic.

I really like the diversity this song has to offer. It starts out very calm with clean guitars and a solo, and then suddenly it turns into a speed metal whirlwind. Also the lyrics have quite a personal meaning to me, so this song will for sure be one of my all-time favorites.