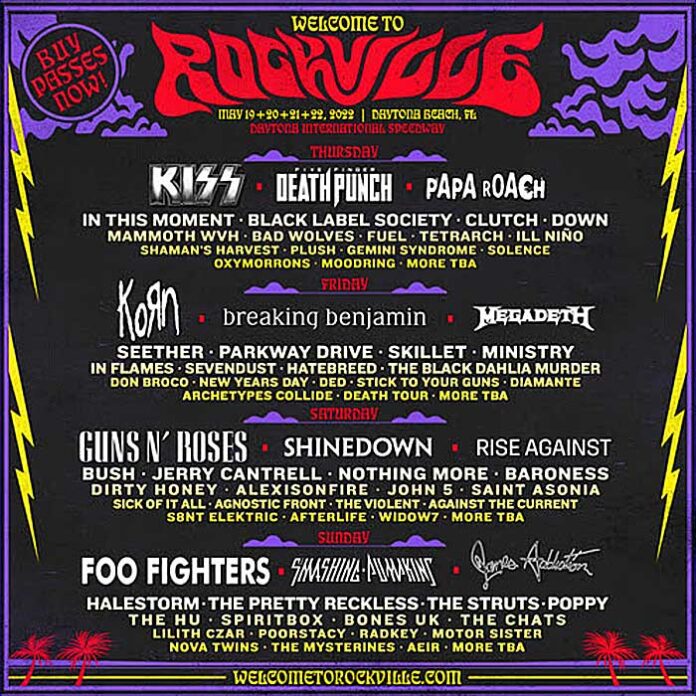 Festival Returns To Its New Home At Renowned Destination Daytona International Speedway In Daytona Beach, FL Transforming It Into The World Center Of Rock

Single Day & Weekend Passes On Sale Now Starting At $99.99 & Just $10 Down Through End Of 2021
www.WelcomeToRockville.com

Just when it was thought that Welcome To Rockville couldn’t possibly outdo its massive 2021 record-breaking event that featured 161,000 people and an at-home livestream audience of 1.2 million, Danny Wimmer Presents has put together the biggest lineup yet for the newly crowned Largest Rock Festival In America. Returning to its new home at the iconic Daytona International Speedway in Daytona Beach, Florida over the weekend of May 19-22, 2022, the event includes previously announced headliners Guns N’ Roses, Foo Fighters, KISS and KORN.

The music legends will be joined by an equally impressive who’s who of rock and metal, including Five Finger Death Punch, Shinedown, The Smashing Pumpkins, Breaking Benjamin, Megadeth, Jane’s Addiction, Papa Roach, Rise Against, Halestorm, In This Moment, Seether, Bush and many more, including buzzworthy up-and-comers Mammoth WVH, Dirty Honey, Poppy, Plush and more.

“Welcome To Rockville this past November was truly incredible. Our new home, Daytona International Speedway, welcomed us with open arms and our fans showed up in record numbers and experienced an unforgettable weekend,” says Danny Wimmer Presents founder Danny Wimmer. “We knew we needed to up the ante in 2022 so we went and booked the biggest lineup that has ever been booked for an American rock festival. We are so excited to welcome the biggest names in rock for one epic weekend this May.”

Single day and weekend passes for Welcome To Rockville are on sale now at www.WelcomeToRockville.com starting at $99.50* for single day and $249.99* for 4-day (*plus fees). Passes can be purchased as general admission or VIP and layaway is available for only $10.00 on any and all pass types, only through December 31, 2021.

Says Halestorm’s Lzzy Hale, “OMG…is this real life? So you’re saying that Halestorm is sharing the stage with Foo Fighters, Jane’s Addiction and The Smashing Pumpkins!! Also, not to mention Guns N’ Roses and KISS…all on the same festival! Yep! You heard it here straight from the banshee’s mouth! And we will be bringing our A-game as always. You do not want to miss this lineup! To say that Rockville is going to be legendary is an understatement…this will be a life-changing show! The countdown begins, see you all in Daytona in May!”

Adds Brent Smith of Shinedown, “We’ve said it before, and we say it now. Shinedown has only one BOSS. It just happens to be everybody in the audience. We are honored to be a part of North America’s BIGGEST Rock N’ Roll festival…Welcome To Rockville 2022, LETS GO!!!”

And Zolton Bathory from Five Finger Death Punch shares, “We are grateful to be part of Rockville 2022! Daytona Beach in May, tens of tens of tens of thousands of fans, and an incredible lineup of legendary bands? Twist my arm!!! We’ll see you all there!”

The current Welcome To Rockville 2022 lineup is as follows (subject to change):

Welcome To Rockville will feature more than 75 music acts over four days, with performances on four stages, along with award-winning spirits, craft beer, partner activations and the best food Daytona Beach has to offer.