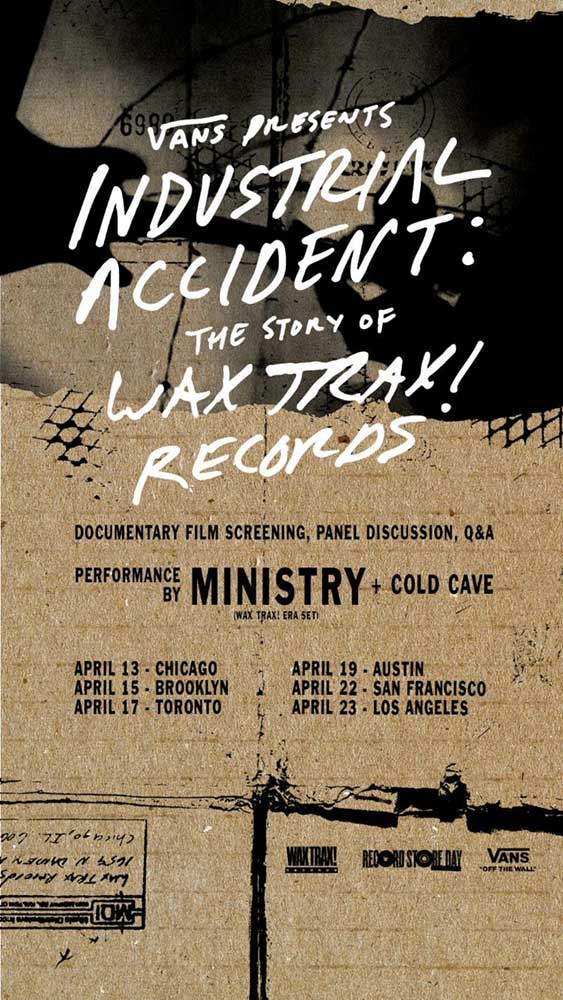 The album, which features previously unreleased songs by Wax Trax! artists, (see track listing below) will be available at independent record stores across the United States and Canada. To coincide with the album launch, Vans will kick off a multi-city Wax Trax! experience featuring screenings of the film, live Q&A, and a performance by Ministry of a Wax Trax! era, early 90s set. On April 13, House of Vans Chicago located at 113 N. Elizabeth St., Chicago, IL will kick-off the first of six stops. Tickets to the Vans and Wax Trax! events will be available through independent record stores on April 13. Partner record stores and ticket information to be announced soon.

“The story of Wax Trax! is a perfect example of the incredible importance and influence that independent record stores have not only on the music scene by selling records, but also on our culture by helping people find a home where they can express themselves through music,” said Carrie Colliton, co-founder of Record Store Day. “There’s no better day than Record Store Day to release this album with Vans, an iconic brand in the world of indie record stores.”

Wax Trax! was an influential Chicago record store and label that helped give rise to punk and industrial music of the 80s and 90s. It also served as a lifeline for people outside of the mainstream by fostering and encouraging a safe place for artists and outsiders. The soundtrack includes artists closely aligned with the label and music scene including Ministry, My Life with the Thrill Kill Kult, The Young Gods, Pankow, KMFDM, Revolting Cocks, FRONT 242, Mussolini Headkick, Laibach, and Chris Connelly.

Watch the trailer for Industrial Accident: The Story of Wax Trax! Records HERE

“Wax Trax! is a story of artistic freedom, creativity and social acceptance of sub-culture through music,” said Brooke Burt, Senior Manager for Lifestyle Brand Marketing for Vans. “We are proud to partner with Record Store Day to release an album and celebrate a story that pays homage to the ongoing influence of independent record stores and pushes the boundaries of music genres.”

In addition to featuring music from the soundtrack, the film delivers insightful interviews with family members, former employees and musicians who worked with or were heavily influenced by Wax Trax!, including Al Jourgensen, Dave Grohl, Trent Reznor, Paul Barker, Ian MacKaye, Steve Albini, Jello Biafra, and others.

As an added dimension of collaboration between Vans and Record Store Day, House of Vans Chicago will host the RSD 2019 List Launch on February 28, 2019 at noon CST.

The announcement scheduled will showcase the highly anticipated limited-edition release titles coming to record stores and will be followed by a panel discussion with artists from the Wax Trax! Soundtrack moderated by Nik Carter host of SiriusXM’s Feedback on the Volume Channel 106.

Panelists include:
Paul Barker – Former Ministry bass player from 1986-2003, member of Revolting Cocks, Lard and Pigface, as well as many other bands

Chris Connelly – Former Ministry keyboard player from 1987-1991, member of KMFDM, Revolting Cocks and Pigface, as well as many other bands

Rick Wojcik – Owner of Dusty Groove in Chicago. Rick spent much of his teenage years, (and his teenage dollars), at the Wax Trax! store, and that has a strong influence on his own Chicago record store, Dusty Groove.