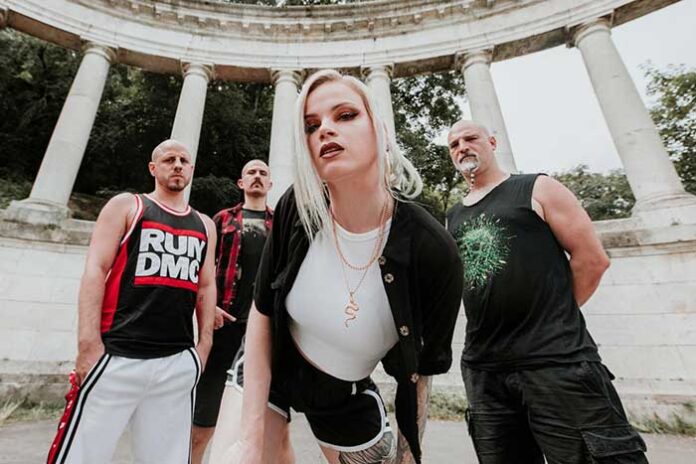 After recently signing with Napalm Records and shaking things up with new single, “Old Tomorrow,” Hungarian outfit THE HELLFREAKS are at it again with their blazing cover of massive classic “Sabotage” by New York hip hop legends Beastie Boys. Showcasing more of what can be expected from their stellar discography now boasting millions of streams, “Sabotage” doubles down on the catchy, trademark, high-octane alt-metal/groove side of the band’s sound.

Frontwoman Shakey Sue’s raspy punk rock vocals and angsty attitude shine bright atop crisp, modern production – bass and drums provide a tight and thick foundation, while guitars go crazy with pitched, Morello-inspired solos, before leading into a kickass breakdown – guaranteed to get the mosh pits crazy! After making a name for themselves internationally by touring in Europe and the USA, “Sabotage” is a merciless demonstration of what Budapest-based THE HELLFREAKS have in store on their upcoming full-length album – ready to take over the world!

THE HELLFREAKS on “Sabotage”:
“Everyone who knows our history might not be surprised by the unpredictable steps of THE HELLFREAKS. We love to challenge ourselves and see this mindset as the oil for our engine, that is why we decided to do something we never did before – to cover a song that represents a legendary piece of rock music history.

“The four members of THE HELLFREAKS are from different musical corners, so it wasn’t an easy task to find the song that feels right to all of us, but when the idea of Beastie Boys “Sabotage” popped up in the air, we were all immediately on board! We admire the band, but at the same, we saw how we could spice the song with some HELLFREAKS spirit to turn it somehow to our own. That being said we decided to record the instrumental part not instrument by instrument, part by part as it’s usual, but recorded it all together, live, to keep the essence of Beastie Boys in our own version too. On the top we wanted to set a sign of our roots visually as well. The New York based Beastie Boys came straight from the underground and had a massive influence on rock music till these days. To respect that, we recorded the video in the heart of our hometown, Budapest, over the rooftops of our city on the Gellért Hill, which is also the home of Hungary’s Liberty Statue.

“We loved working on this very much and hope that you’ll enjoy our version!”