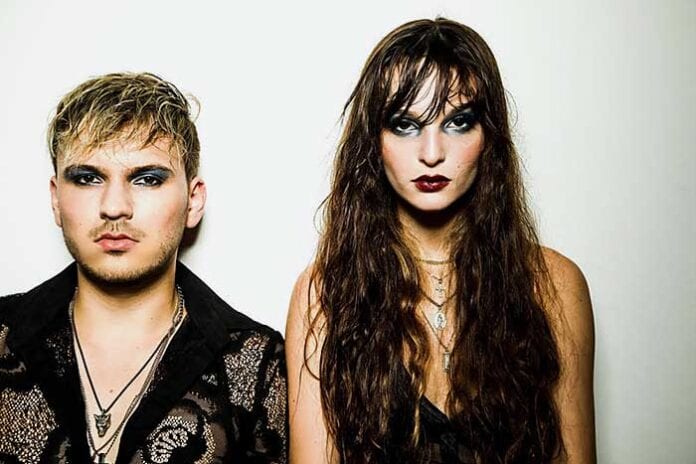 A saucerful of secrets, sci-fi has a rallying cry. Lauded “Best Unknown Band” by Miami New Times following the release of their self-titled debut EP and a nearly sold-out 70-city global tour alongside Palaye Royale, South Florida-based sibling-fronted THE HAUNT has issued “Brag About,” an anthemic rocket ride into an echo chamber of magic and majesty, a taut three minutes that co-mingles at the altar of modern rock and the precipice of Westworld. Delores Abernathy has a new loop.

Written by band co-leader/guitarist/vocalist Maxamillion Haunt, and produced by Matt Good (Asking Alexandria, Sleeping With Sirens, The Word Alive), the song retains the hallmark HAUNT sound with swaths of ominous flourishes while boldly propelling it with a confident musicality that deftly accentuates the effervescent power of singer Anastasia Grace.

Max shares, “‘Brag About’ is a futuristic rock anthem about feeling lost when you’re far from people you love. On tour, we felt like we were trapped in a time capsule while everyone else’s lives went on without us back home. The song symbolizes the highs and lows of our closest relationships and how our social existence relies so heavily on who we are to the people around us. Being away really makes you appreciate the people who feel like home.”

From Social Intercourse, the quartet’s forthcoming 6-song EP, “Brag About,” is the first release in conjunction with DashGo, a next-generation record label that’s the premier end-to-end music distribution resource. “Brag About” marks the first new material since 2019’s “Why Are You So Cold?,” which Outburn Magazine proclaimed “a resonant anthem with wistful elegance and raw nerve,” and “Cigarettes & Feelings,” a “vibrant tune scented with an alternative-pop ‘n’ rock aroma” [Bong Mines Entertainment] produced by Christian Medice, known for his work with Lovelytheband (“Broken”) P!nk, Halsey, The Aces, and Natalie Imbruglia.