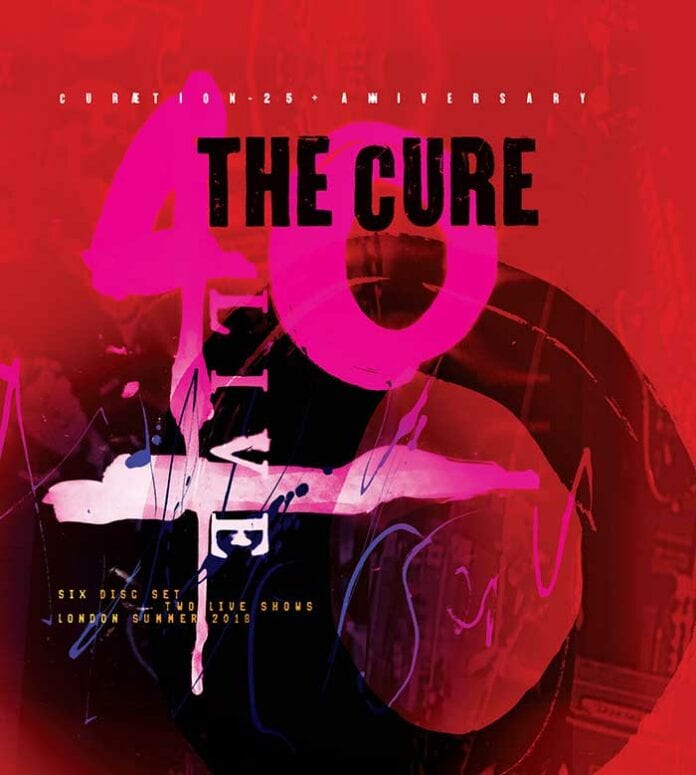 Less than a year before their induction into the Rock and Roll Hall of Fame, The Cure celebrated their 40th anniversary. On October 18th 2019, Eagle Vision will present two special performances in which they commemorated this milestone, when 40 LIVE – CURÆTION-25 + ANNIVERSARY is released in a Limited Edition Deluxe Box (2Blu-ray+4CD, or 2DVD+4CD, each with 40-page book), on Limited Edition Hardbook 2Blu-ray or 2DVD (each with 16 page book), and standalone digital formats.

The first film — CURÆTION-25: From There To Here | From Here To There – was captured on the tenth and final night of the 25th Meltdown Festival (curated by lead singer Robert Smith) at London’s Royal Festival Hall in June 2018. Presented in HD with 5.1 surround sound, Smith, Simon Gallup, Jason Cooper, Roger O’Donnell, and Reeves Gabrels performed a song from each of their 13 studio albums in chronological order, displaying the evolution of The Cure’s music live on stage. At the core of the set, they broke the cycle with some new, unreleased songs – offering a glimpse into the band’s future – before retracing their steps with another song from each album, ending with “Boys Don’t Cry.”

Released in theaters globally only last week, ANNIVERSARY: 1978-2018 Live In Hyde Park London features the band’s acclaimed 29-song, 135-minute anniversary concert. Filmed in one of London’s Royal Parks to a crowd of 65,000 fans, The Cure presented a four-decade deep set on July 7, 2018, including “Just Like Heaven,” “Lovesong,” “High,” and “The End Of The World.” Adding to the experience, the band is back-dropped by giant screens displaying footage that complements the unique moods and emotive song writing that established The Cure as pioneers of alternative rock. The result is a concert that Rolling Stone expressed shows the “unique power in The Cure’s live performance.”

Directed by Tim Pope – the long-time collaborator behind many of The Cure’s music videos and their award-winning 1986 film In Orange – Anniversary is chronicled in 4K with a 5.1 surround sound mix by Robert Smith and Paul Corkett. Pope states “I went to rehearsals in a very cramped studio just the day before the show… I knew as the set list unfolded that the only way to show people The Real Cure was to capture not only the grand, epic dimension of their stage show, but also the close, intimate side of this band simply making music together.”

“This really was the perfect way to celebrate 40 years of the band,” Smith exclaimed. “It was a fabulous day none of us will ever forget!”