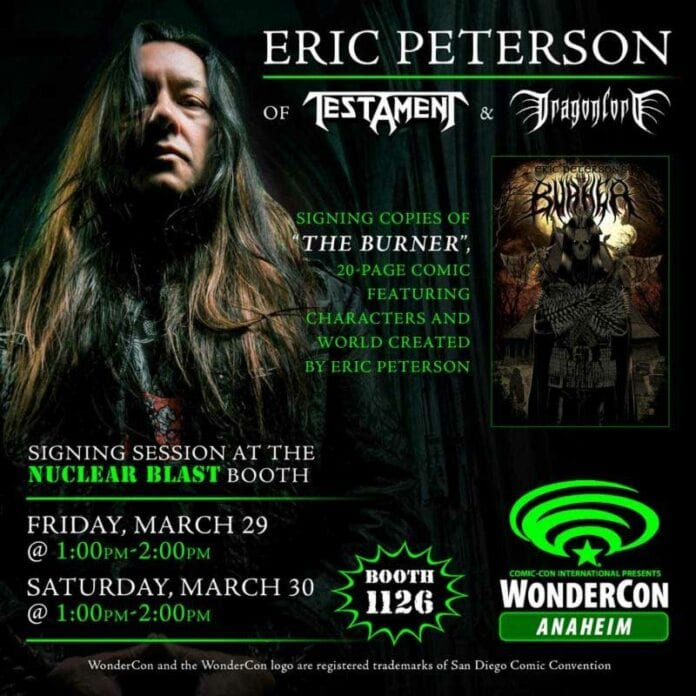 Renowned Testament guitarist and Dragonlord mastermind Eric Peterson will be meeting Anaheim, California area fans at WonderCon this weekend! At the convention, fans can grab a copy of his exclusive, fully original, 20 page full color comic, THE BURNER, which he will be signing at the Nuclear Blast booth (#1126) on Friday, March 29 and Saturday, March 30 from 1:00-2:00 PM each day! There are limited copies available, so comic enthusiasts and heavy metal fans alike shouldn’t miss their chance to collect this special comic.

Eric will also have special Dragonlord Dominion gatefold LP vinyl for sale at his signing, which include an oversized lyrical comic book with each.

In addition to the Nuclear Blast signing, Eric will also sign copies of THE BURNER on Friday, March 29 from 3:00-3:45 PM at the Acme Ink/Mel Smith booth (#SP42). Mel Smith is the creator of comics like the high seas zombie series Dead Ahead, Becoming Frankenstein, Gumby, Death Race 2020 and more.

THE BURNER is the first ever black metal superhero! Brought to earth for centuries, avenging the souls abused by power, he now comes face to face with something he wasn’t ready to fight – himself! THE BURNER is a creature from a “dragon planet” within our galaxy who has an otherworldly and inexplicable mental connection (through dreams and visions) to Eric Peterson’s own character in the comic. In the comic, Eric thinks he’s just writing DRAGONLORD songs and lyrics on his own, but little does he know, The Burner is behind it all!

FIT FOR AN AUTOPSY Drops “In Shadows” Video