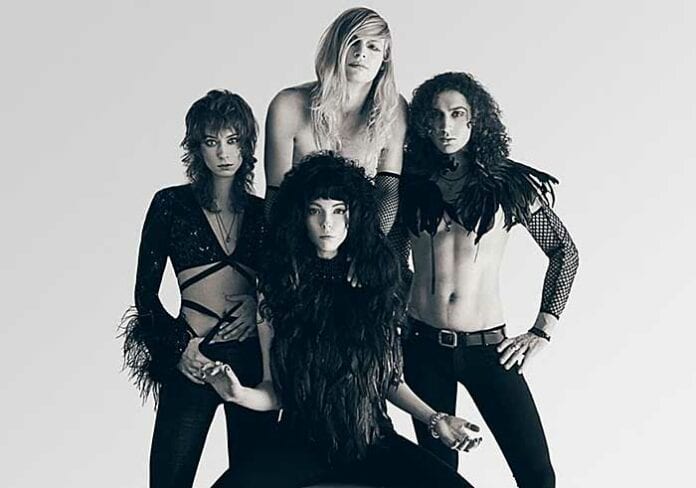 Atlanta glam punk four piece STARBENDERS are set to release their hauntingly unpredictable brand of rock ‘n’ roll alchemy upon the world with their new album Love Potions when it drops on February 14th via Sumerian Records.

With a unique combination of ethereal fragility, magnetic rock ‘n’ roll swagger, perfectly crafted pop choruses, and punk rock fury, frontwoman Kimi Shelter and her glamorous gang of misfits cast a captivating spell with the 14 track sonic grimoire that is Love Potions. The album features previously released singles “Holy Mother” and “London,” which provides the soundtrack for a new live video the band have just released featuring footage shot on their current tour.

Love Potions is STARBENDERS first full-length release with world renowned independent label, Sumerian Records and follows the announcement of their signing last year. B.I.J.Records will be releasing Love Potions in Japan on March 14th, with exclusive bonus tracks and spring dates in Tokyo to be announced soon.Speaking on the upcoming release, Kimi Shelter opines:

“There comes a time when dreams turn into reality. We have to be careful what we wish for, as anything goes in the land of our creation. The friction of this existence is my deepest source of inspiration. The making of Love Potions pushed us beyond the walls of our perceived limitations. This record is a living diary of a band that exists between two worlds. Please be warned that upon listening, you will become a part of a ritual that is in motion. You will be a part of our story. If you’re with us, you must be kind, you must be brave and above all, you must be free.”