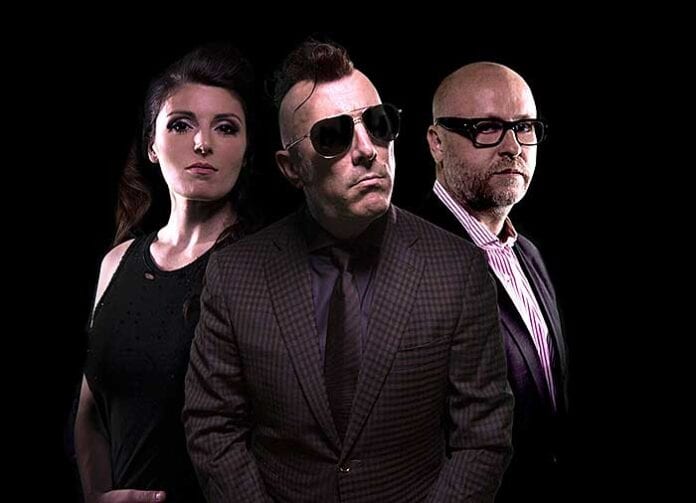 Reports out of Jerome, Ariz. confirm the impending arrival of Existential Reckoning, a 12-song album from the special agents operating under code name Puscifer. The release is scheduled for an Oct. 30 arrival via Alchemy Recordings/Puscifer Entertainment/BMG.

In a report to commanding officers, the trio said: “In the Summer of 2016, we received a call from Hildy Berger, Billy D’s loving wife. [REDACTED]. Billy D, rumored to have been carrying nothing but a bottle of wine and a mysterious briefcase, had disappeared without a trace somewhere in the high deserts of the Southwestern United States.

Rumors of alien abduction were at the forefront throughout the dark web chatter. Therefore traditional methods of tracking a lost and hopeless drunkard in a dirty leisure suit were not an option. [REDACTED]. We hypothesized the only way to locate the subject was to [REDACTED] construct traversable bridges between intuition and technology, requiring us to explore the metaphorical mycelium between Math and Passion, Art and Order, and Hope and Proof. Through these methods [REDATED] we are able to pinpoint the exact location of both Billy D and the mysterious briefcase.”

The agents recruited back-up: Greg Edwards (an experienced Agent having worked in operations classified as Failure and Autolux; bass, guitar, keys), Gunnar Olsen (drums) and Sarah Jones (drums). Existential Reckoning was produced by Mat Mitchell and Puscifer. The album was recorded and mixed by Mat Mitchell at Puscifer Studios in North Hollywood, Calif.

Born somewhere in the Arizona desert, Puscifer is an electro-rock band, multimedia experience, traveling circus, and alien abduction survivors. The group’s catalog consists of three full-length studio albums—”V” is for Vagina [2007], Conditions of My Parole [2011], and Money Shot [2015]—in addition to a series of EPs and remixes. Beyond the core trio of Maynard James Keenan [vocals], Mat Mitchell [guitar, production], and Carina Round [vocals, songwriting], the group’s ever-evolving ecosystem encompasses a cast of characters such as Billy D and his wife Hildy Berger, Major Douche, Special Agent Dick Merkin, and many more. Meanwhile, the moniker’s origins can be traced to a 1995 episode of the HBO classic Mr. Show where Keenan first utilized the name “Puscifer.” Entertainment Weekly christened them, “Exceptionally groovy,” and Revolver fittingly described them as “indescribable.” Renowned for an immersive live show, the group’s performances blur the lines between concert and theater, traversing the dusty American Southwest with Billy D and Hildy or the sweaty squared circle with Luchadores. They’ve brought this to life everywhere from Coachella to Bonnaroo. On their 2020 debut for Alchemy Recordings/BMG, entitled Existential Reckoning, Puscifer track Billy D back to the desert and, just maybe, uncover the truth about aliens once and for all.