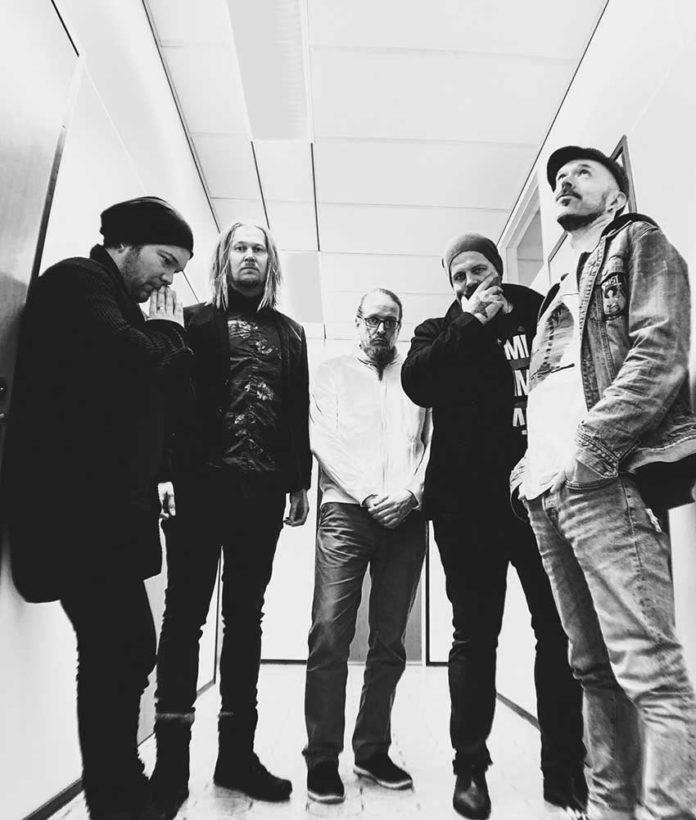 On April 26th Finnish band OCEANWAKE is going to release their fourth album and Lifeforce Records debut Lights Flashing in Mute Scenery and if you are looking for fast access and smooth entertainment, you are in the wrong place. OCEANWAKE challenge listeners.

The five musicians from the coastal town of Luvia attract uncomfortable and unpredictable attention—initially by all means. The way of the Finns’ never continues in a straight line. Permanent branches, parallel tracks and hardly recognizable paths secure the progress. Therefore it is important to remain attentive and pay attention to all signs, and sounds.

OCEANWAKE, founded in autumn 2009, have already released three albums: Kingdom (2013), Sunless (2015), and Earthen (2017). Over the years, the Finns have found to an experimental as well as progressive and all-encompassing organic heavy Sound that stands for itself. Deciphering and understanding “Lights Flashing in Mute Scenery” demands work and time, yes. But the examination of the seven finely composed and orchestrated songs is worthwhile.

The multi-layered art of OCEANWAKE comprises music, lyrics, concepts and staging. The whare size and significance of the band’s approach is only revealed in the interplay. It is in the nature of things that one repeatedly encounters supposed contradictions. The musicians from Luvia keep following their instincts and free-spirited creativity. On Lights Flashing in Mute Scenery you don’t even have to look for conventions or genre boundaries. OCEANWAKE are everything and nothing at the same time—wonderful!

If you put all this together, it’s not surprising that the influences OCEANWAKE point out to are widely scattered and leave a lot of room for surprises and border crossings: King Crimson, Emperor, Cult of Luna, My Dying Bride, The Ocean, Paradise Lost, Opeth, Isis, Pink Floyd, and Black Sabbath.