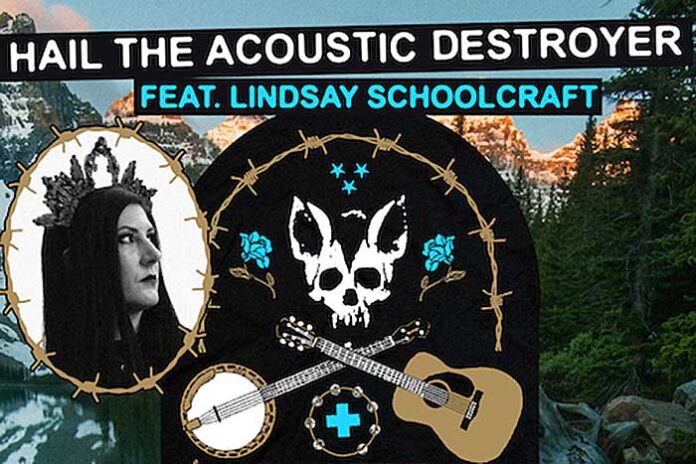 Juno nominated singer-songwriter LINDSAY SCHOOLCRAFT is honored to have been featured as a guest vocalist on “Hail The Acoustic Destroyer” by legendary Canadian hardcore band CANCER BATS. The song is from the band’s upcoming EP You’ll Never Break Us: Separation Sessions. All proceeds raised via the band’s Bandcamp, as well as, a portion of the proceeds from shirt sales will be donated to Water First NGO, an organization that helps to train interns in water purification in order to help their communities have access to clean drinking water.

Lindsay commented, “CANCER BATS are underground kings as far as the hardcore punk scene goes so I was a bit perplexed when Liam reached out asking me to collab on a track. Once he told me it was an acoustic version of ‘Hail Destroyer’ I was like “ok, that makes more sense”. Their acoustic releases over the pandemic have been a real treat and I highly recommend checking them out!”

The band further commented “For ‘Hail The Acoustic Destroyer’ we all really wanted to capture the same energy and tension of the song but using a completely different approach from the original,” shares lead vocalist Liam Cormier. “Looking more at it being sparse and looming to convey the ‘heaviness.’ Once that groundwork was laid, having Lindsay Schoolcraft’s amazing goth tinged vocals on the track really pushes the song into a new melodic dimension, making the listener forget what the original ‘Hail Destroyer’ even was.”

WITHERFALL Releases Video For “…And They All Blew Away”