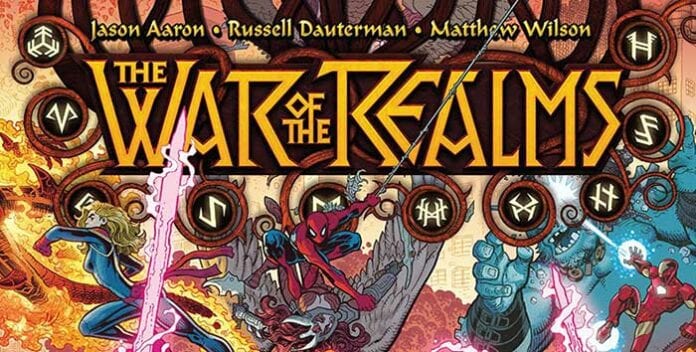 Jimmy Urine is no stranger to the Marvel universe having acted in Guardians of the Galaxy 2 as the ravager Halfnut. The Mindless Self Indulgence front man has scored the theme to a major cross over event. Marvel: War of the Realms.

Marvel: War of the Realms will feature many favorites within the Marvel universe. Some pictured in the art are: Thor, Dr. Strange, Venom, Captain America, Spiderman, Iron Man, Black Panther, Daredevil, Punisher, Black Panther, Wolverine, She Hulk, and many more… (maybe Halfnut will make an appearance?)

While reading the comic book, listen to the official WAR OF THE REALMS soundtrack theme, composed by Jimmy Urine (Mindless Self Indulgence)! It’s a song so epic, even Surtur sheds a tear when he hears it!

Marvel has said of the comic: “The dark elf Malekith wages a war that has spread from one otherworldly realm to the next, setting them all ablaze, and now it’s time for that war to finally explode into the last realm standing: ours. All the worst monsters from the Ten Realms come pouring in over the globe, and it will take the biggest heroes in the Marvel Universe to stop them from conquering Earth – and the whole realm! Jason Aaron has been building to this for the last six years in his Thor comic book and the ramifications will have a lasting effect on the Marvel Universe for years to come!”

Head over to https://www.marvel.com/war-of-the-realms to learn more about The War of the Realms.