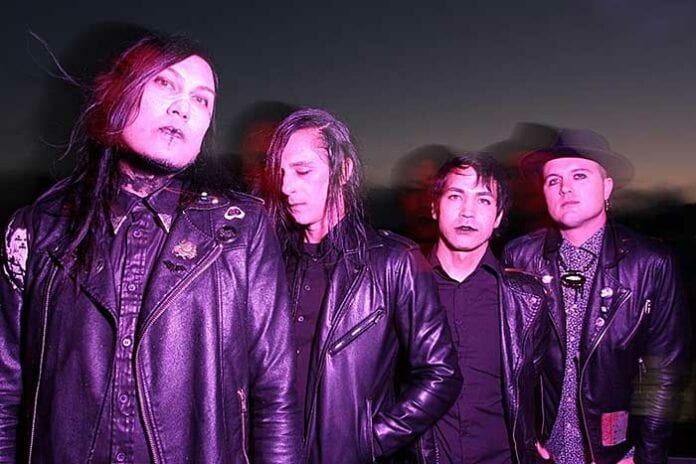 Horror obsessed provocateurs DEATH VALLEY HIGH will kick off 2020 in high gear, taking to the road for a west coast tour with electro-industrial outfit Silver Snakes just a few days into the new year.

The nine date tour begins January 3 in San Francisco and wraps up January 12 in Fullerton, CA.

“We’ve been chatting off and on about teaming up with Silver Snakes for a while,” says DEATH VALLEY HIGH vocalist Reyka Osburn. ”We had played a show in San Francisco together once before and we’re amped to be out on the road with them for this run.”

DEATH VALLEY HIGH released a new EP entitled Duel this past summer via Minus Head Records. The band has described Duel as a sort of modern-day mix tape that defies the rules of a conventional release. While the first half of the record features covers, the latter half is an offering of intense remixes, lending to the record’s name. Each song on Duel features a special guest, including Chino Moreno (Deftones), Spirit in the Room, Chris Connelly and more, each of whom was challenged – along with DEATH VALLEY HIGH themselves – to venture outside of their comfort zone.

Swerving between the sarcastic and the saccharine, DEATH VALLEY HIGH deliver doom pop and death disco of the highest order. Outburn heralded them as the “New Face of Goth Rock,” while UK tastemaker Kerrang! advised fans of Marilyn Manson and Nine Inch Nails to take note. But where most macabre music-makers craft anthems for the grave, DEATH VALLEY HIGH make songs to wake the dead. These guys don’t dwell in melancholy; this is a funeral procession to dance to. Universal monsters, Hammer films and haunted houses collide within their sonic psyche, earning them coveted spots on tours with likeminded rabble-rousers like Killing Joke, Combichrist, Crosses, Powerman 5000, and Orgy. DEATH VALLEY HIGH turns convention on its head, with unapologetic distaste for conformity and a tongue-in-cheek whimsy. DEATH VALLEY HIGH is unmistakably important, conjuring New Romantic majesty for the modern age.