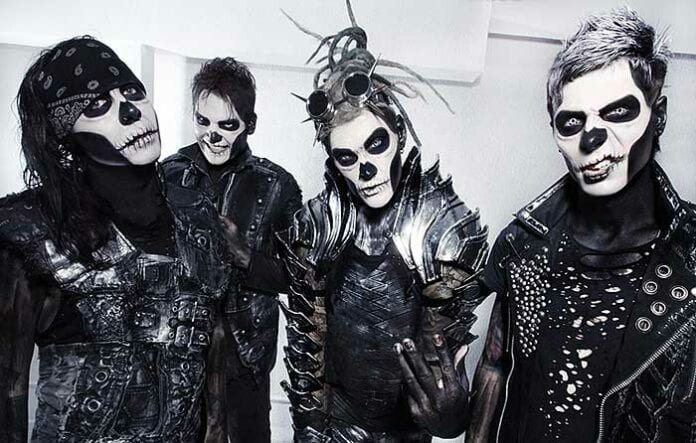 Industrial goth/rock quartet DAVEY SUICIDE will release their fourth album—ROCK AINT DEAD—on January 24, 2020 via Out Of Line Music/InGrooves. Featuring 13 tracks of their signature blend of arena rock, sleaze, and industrial music with a theatrical edge, the album was mixed and produced by Charles Kallaghan Massabo (Falling In Reverse) at Kallaghan Studios in Los Angeles, CA while being mastered by Shawn McGhee (Five Finger Death Punch, Papa Roach, Hellyeah) at Artistry Studios in Las Vegas, NV.

Directed by Richard Villa III of Exhibit A Gallery, the video takes place in the year 2039 in a dystopian society that has dissolved the rock genre. Watch the “Rock Aint Dead” video in full below. (Note: Skip ahead to the 6:13 mark for just the single.)

“In a not so distant future, all aspects of human existence are being controlled,” DAVEY SUICIDE says, explaining the video. “Where ‘silence is a virtue’ and most freedoms like artistic expression are forbidden in a world of fabricated reality. Those in power have determined that Rock music has no redeemable qualities, is corrupting the culture and is no longer an acceptable form of music or entertainment.”

“In the year 2039 in Los Angeles, Rock music is no more than delusional memories of a sadistic past of the unevolved. Rock music and other antisocial expressions are forbidden in this new perfectly sterile society. All creative expressions have been deemed socially toxic and poison to human uniformity. The only way for anyone to be expressive or to experience any form of creativity is through the illegal use of Drug Enhanced Virtual Reality (DEVR). This underground DEVR experience is only obtained by those who seek it on the streets of back alleys hidden in the shadows. For those wanting to participate in this type of DEVR experience, there is this warning: ‘This type of music is forbidden and any partaking in it is punishable by death. Proceed at your own risk’”

SLAVES TO FASHION Goes To Seattle