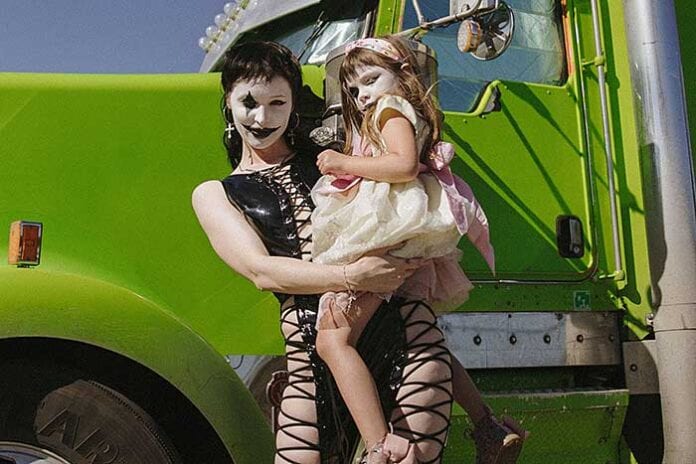 Canadian-born musician/model Dana Dentata has shared an official music video for her new single, “Do U Like Me Now?” Directed by Carlie C., the video features an appearance from Adult Film Star Eliza Ibarra who Dana Dentata drew inspiration from for the song. Ibarra experienced a viral moment back in 2011 when she posted a video titled “Do You Like Me Now?” to Tumblr, a reaction to unrealistic expectations placed on women by men, which she endured at a young age as she struggled with low self-esteem. The viral video left a lasting impact on Dana Dentata who sampled it for “Do U Like Me Now?”—seizing the reins on the narrative of being a woman in a patriarchal society, transmuting her trauma and weaponizing it.

Dana Dentata expanded on the genesis of the song and video concept telling, “I saw the ‘Do You Like Me Now?’ video by 12-year-old Eliza one day at the studio and I thought it was bad ass. It instantly inspired me to talk about all the other bullshit things that are expected of us and projected at us. I related to it because I was actually in a relationship where I had to drastically change my hair, clothes, nails, my personality, everything for someone, I was really screaming a form of ‘do you like me now, bitch?’ inside. Being able to recreate this experience but take his ass out and free my inner child was my redemption. I feel like the song and video have the same energy as Eliza’s original video and whether you are a 12-year-old girl or a porn star we can all relate to feeling pressured by society to change ourselves. To have Eliza in it made the video so meaningful and literal.”

“Do U Like Me Now?” previews Dana Dentata’s forthcoming debut album, Pantychrist. Expected to arrive this year, Dana Dentata has been finalizing work on Pantychrist, collaborating in the studio with artists/producers: Dylan Brady of 100 Gecs, Kris Esfandiari of King Woman/Miserable, Robokid, Yawns and Fish Narc of GothBoiClique, The Heavy, and more.

INSOMNIUM Releases New Single and Music Video For “The Conjurer”