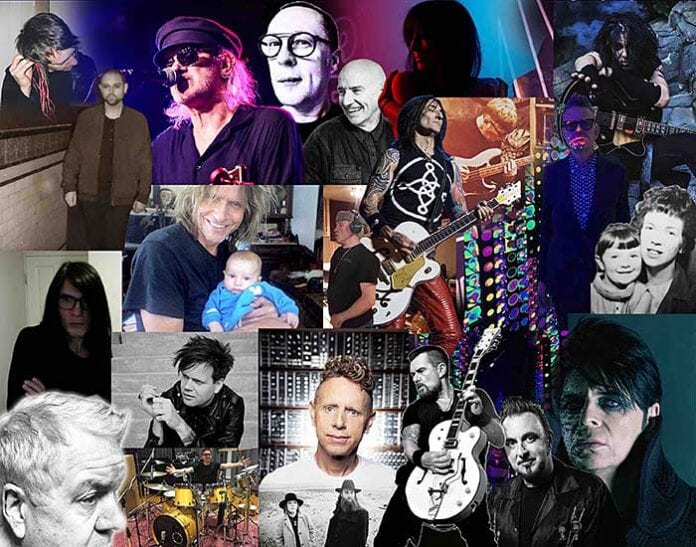 Few artists rocked the 80s as much as THE MISSION. Frontman WAYNE HUSSEY continues to churn out brilliant music, including as a solo artist. In support of key workers dealing with Covid-19 globally, Hussey has remade the classic Mission anthem “Tower Of Strength,” joined by some very talented friends, including members of The Cure, Siouxsie & The Banshees, Slowdive, Bauhaus/Love and Rockets, The Smiths, The Twilight Sad, Depeche Mode, The Cult, The Wonder Stuff, Gary Numan, Evi Vine, Midge Ure (Ultravox), Spear of Destiny/Theatre Of Hate, Beauty In Chaos, The Soft Cavalry, All About Eve, Guns N’ Roses, Nine Inch Nails, and Gene Loves Jezebel.

From Wayne Hussey: “When Covid-19 hit I started receiving messages asking ‘why don’t you re-issue “Tower of Strength” for the front line workers?’ The song had apparently been adopted as an anthem by some NHS workers, and it got me thinking that I would like to contribute something to the greater cause at this unprecedented time and the only thing I could really contribute is music. So in conjunction with my good friend Michael Ciravolo, I came up with the idea of recording a new version of “Tower of Strength” for charity by enlisting the help of musician friends and acquaintances. “Tower of Strength” was first released by The Mission as single in 1988 and then again in 1994. It charted twice in the UK top 40 and has proved to be probably our biggest song and the one we generally close our shows with. It is anthemic. I wondered if recording a more well known song might have a greater reach but neither Michael or I could come up with any suggestions that seemed to fit lyrically without getting too corny. So “Tower of Strength” it was then.”

“Usually I detest things that are done for charity that are also self-serving, but I came up with a plan that satisfied my conscience. I spoke with my fellow Mission band members who cowrote the song—Craig Adams, Mick Brown and Simon Hinkler—and we agreed to give up any publishing income generated by the new version to nominated charities, including mechanical and performance royalties and 100% of any revenue raised by sales. TOS2020 has been renamed to divert funds from the original version, and the charities will all be personally nominated by the people involved in its recording and release. Because the musical contributions are global our idea is that the proceeds will be divided and distributed equally among all the beneficiaries.” Wayne Hussey, Sao Paulo, Brazil, 23rd July, 2020.

From TOS2020 collaborators:
“Being given the chance to do some good to raise money for people and animals struggling in these frightening times by singing one of the best songs ever written was such an easy thing to say yes to. An absolute honour to be involved.” – Gary Numan

“Today as we face an unprecedented crisis with COVID 19, we have to be united in purpose to help humanity and especially the disenfranchised and impoverished among us, survive. Music can be a powerful way to join us all together and help those that need it most now.” – Lol Tolhurst

“I’ve seen and heard Tower of Strength played often and I’ve experienced its effect and the impact it has on others. It’s an anthemic song of hope, comfort and joy, with a message that now seems more relevant than ever. I hope this project, in which I am privileged to be involved, brings a little light into the shade, and allows us all to, albeit momentarily, focus on an ‘afterwards’.” – Julianne Regan

“You get a message from Wayne Hussey asking if you can put a vocal (alongside a great list of singers, musicians and friends) on a reworking of a massive track in the repertoire of The Mission to aid COVID-19 charities around the globe – you say yes and get it done as well as you can.” – Kirk Brandon

“I did it coz Wayne asked me to and I love Wayne.” – Billy Duffy

“Being asked to contribute to making a piece of music isn’t overly taxing for a musician. I’m just pleased Wayne didn’t ask me to perform brain surgery or fly a jumbo jet, something which takes some form of skill.” – Midge Ure

“My positive of the pandemic has been connecting to kindred spirits. Honoured to lend a hand.” – Budgie

“I would like it known that, if asked, I would do absolutely anything for Wayne Hussey. Tower Of Strength is utter perfection: it is daring in its intent and supremely executed in both its original recording and every single time I have seen it performed live. To be asked to contribute to this new version was a very emotional experience for me. So many intense memories came flooding back as I sang, there were tears, I can assure you of that.” – Miles Hunt

“Direct Relief is an organisation that helps people in times of emergency like natural disasters or in times of poverty by getting medical equipment and supplies to where they are needed most. At the moment they are obviously heavily focused on Covid-19.” Martin Gore (on Direct Relief, his nominated charity)

“I jumped at the opportunity to be a part of this project – I always loved this song and asked Wayne if I could take a crack at John Paul Jones’ string arrangement, which I have always admired. Hopefully my take on it does it justice.” – Richard Fortus

“The power we have collectively is transformative … I love and admire Wayne and the band and the warmth and intention behind this release. I know the power of this song and I feel so honoured to have been invited to join so many celebrated artists, this is a beautiful star in the darkest of times and I know the difference it will make.” – Evi Vine

“To be amongst these amazing artists that I’m a huge fan of and have so much respect for is a true honour, especially for such an important cause. The sacrifice that all the amazing NHS staff and key workers have made is truly humbling and inspiring. To be part of an incredible group of people that want to give something back and show their gratitude is something I’m extremely proud of.” – James Alexander Graham

“When I was asked by Wayne to be part of this fantastic charity project, I immediately said yes! If I could contribute to supporting the hard work fighting Covid 19 by making a remix of Tower Of Strength, that was a way for me to make a small difference. I’m very honoured to be a part of this.” – Trentemøller

“I signed on for this project because I felt that it would be a great way to raise a lot of funds for those in need at this time. When I heard all the names of artists who were collaborating, I knew that it would turn out very special. I’m very grateful to be given the opportunity to contribute to this marvellous project.” – Kevin Haskins

“When Wayne emailed me with the idea of contributing vocals to this project I jumped at the chance. Tower of Strength is such an anthemic song it’s only fitting that this has been done to support the various charities. It’s an honour for me to be a small part of the process and what a stellar line up of people involved.” – Rachel Goswell

“So honoured to be part of this wonderful project. It’s also interesting that three of the original performers on our – Gene Loves Jezebel – very first recording, ‘Shaving My Neck’ are reunited by chance some 37 years later: Julianne Regan, J.P, and myself. Hats off to Wayne and the Mission for giving this rendition for charity during this pandemic.” – Michael Aston

“Absolutely buzzed and honestly flattered to be asked to not only add my voice to this wonderful recording, but also give something back to our much loved and beleaguered NHS. The perfect song for these difficult and challenging days.” – Jay Aston

JINJER Closes 2020 with Socio-Critical Music Video for “Home Back”