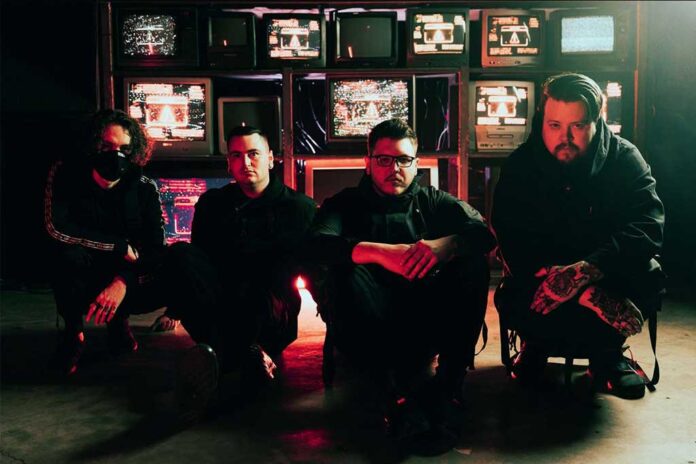 CANTERVICE hits the ground running with a fiery new music video for the release of their industrial/nu-core-inspired alt-metal single “Doomsday” directed and edited by Toby Canning. “Doomsday” marks their first official new release on the independent record label FiXT. The video depicts a dark and sinister atmosphere illustrating perfectly the overall arching theme of the blazing single.

Produced, mixed, and mastered by RIAA Gold and Billboard charting producer/engineer Cameron Mizell, best known for his work with Sleeping With Sirens, Memphis May Fire, I See Stars, and The Word Alive, “Doomsday” rises out of the chaotic depths of a futuristic dystopian society as an anthem for a new generation of freedom fighters and is an invitation for those who rebel against a system that enslaves us all. Featuring provocative lyrics, heavy guitars, synths, and strong rhythms, “Doomsday” is the ultimate soundtrack to your next rebellion. This is your invitation to burn it all down. Are you joining the party?

“‘Doomsday’ is a song aimed to break the complacency in a society that has been sedated by fear,” states CANTERVICE. “Many individuals are terrified when it comes to challenging the mold they’ve been forcefully reposed in. Doing the basic things that make us human, such as standing up for what is right can have severe consequences, consequences that inspire inaction, and selfishness in times where action is critical. This song is aimed to inspire those who are struggling to let go of that fear, letting them know that they are not alone in their struggle and that inaction will only breed oppression.”

“Doomsday” is out now from independent multi-genre label FiXT.

MOTIONLESS IN WHITE Share Cover of The Killers’ “Somebody Told Me”

A DAY TO REMEMBER Returns to the Road on “The Re-Entry...