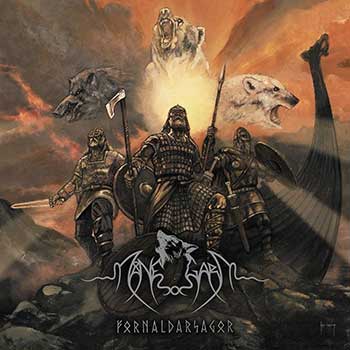 SWEDISH VIKING BLACK FOLK METAL: There’s something to be said about consistency. Månegarm is a Swedish metal act with attachments to the black and Viking metal scenes of the mid 90s, as well as the folk metal boom that was birthed from bands like Finntroll. Older heads may also remember the excellent and underrated Mithotyn from the earlier part of that decade, another comparable act to Månegarm’s melodic and epic metal sound.

The band has quietly released nine albums at this point, never really reaching the heights achieved by acts like Moonsorrow or Ensiferum, yet developing a fine career of meat and potatoes metal in their own right. Think of Månegarm’s catalog as something like an AC/DC’s. Does one need to own every studio album the Aussies ever released? Probably not. It’s best to just pick a couple you reallyenjoy and stick to them.

The early days of Månegarm were comparatively more raw and blackened than the act presented here on Fornaldarsagor, but this isn’t to say that the band is spinning its creative wheels. The new material is far more developed and mature, particularly in the vocal department. Erik Grawsiö has a burly and emphatic clean delivery that’s somewhere between growl and howl, capturing that classic Bathory feel without being a Quorthon clone. Grawsiö isn’t afraid to go harsh either, and this effect is balanced nicely by female vocals that are flowing, ethereal, and well placed within the songs.

The songwriting here on Fornaldarsagor is, like we mentioned earlier, consistent. There’s nothing that is going to blast any doors off hinges, but songs like “Tvenne Drömmar” are speedy enough to get the blood boiling and fists pumping. The string accompaniment is also a nice touch, and is pervasive throughout the album without dragging it down. Still, there’s something magical missing that could really put this album over the edge. A more involved lead guitar element could help, or maybe something a bit more brooding to mix up the atmosphere. Fornaldarsagor is just a bit too upbeat for its own good.

At this point, it’s highly doubtful that Månegarm is going to be a household name in folk metal circles, and that’s okay. The band’s discography is consistently strong, but not entirely memorable, making them a something of underground bridesmaid, but never a bride. So, just pick your favorite Månegarm album and run with it. Fornaldarsagor is as good a place to start as any. ~ George Pacheco