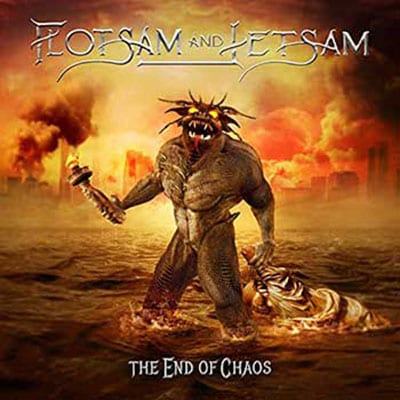 FLOTSAM AND JETSAM
The End of Chaos

MELODIC POWER/THRASH METAL: Shortly after Phoenix thrashers Flotsam and Jetsam’s 1986’s debut release, Doomsday for the Deceiver, original bassist, main songwriter, and part-time manager Jason Newsted was promoted to Metallica, leaving the band in an unpredictable conundrum. However, the band stormed back with their triumphant sophomore release, No Place for Disgrace, proving it could carry on without Newsted. Although the band went through a bit of a drought throughout the 90s and beyond, their self-titled 2016 release put the band back on track. Now on its 14th studio album, The End of Chaos, the band is on fire. Featuring the pulsating basslines of Michael Spencer, the classic riffs from original guitarist Michael Gilbert along with fellow guitarist Steve Conley, journeyman drummer Ken Mary, and, of course, vocalist Eric “A.K.” Knutson and his distinctive vocals give Flotsam and Jetsam a unique identity.

On album opener “Prisoner of Time,” the band injects its trademark Iron Maiden worshiping melodies, accompanied by a swirling arpeggio guitar intro leading to a killer bassline and a memorable chorus. In fact, the album is littered with anthemic, fist-pumping choruses throughout its 12 well crafted melodic thrash attacks. “Control” is a surging assault decorated with dual Maiden-esque guitar harmonies, while the surging “Prepare for Chaos” is a catchy earworm. “Slowly Insane,” “Architects of Hate,” and “Demolition Man” display the band’s more power/thrash qualities. “Unwelcome Surprise” shifts into a midpace Maiden gallop with A.K.’s soaring vocals recalling something off Cuatro or Drift. The 80s style metal riffs of “Snake Eye,” the swirling guitar riffs and basslines of “Survive,” and the relentless urgency of “Good or Bad” set up the finale perfectly with the crushing closer “The End.”

Every minutiae of the stellar production/mixing/mastering lets each instrument shine through with blazing colors. The songwriting is tight and concise with absolutely no filler throughout The End of Chaos’ 50 minute runtime. Flotsam and Jetsam circa 2019 sounds reinvigorated and ready to kick some ass. ~ Kelley Simms

THE ACCUSED A.D.: The Ghoul in the Mirror﻿