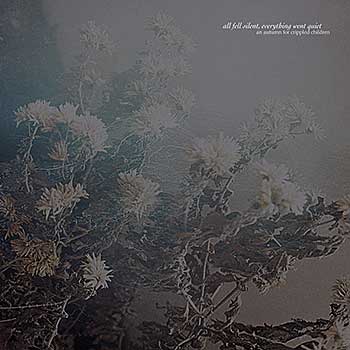 AN AUTUMN FOR CRIPPLED CHILDREN
All Fell Silent, Everything Went Quiet

POST-BLACK METAL: While ultra-melodic, shoegazing black metal is no longer a new or shocking proposition, mysterious Dutch deviants An Autumn for Crippled Children continues to stand out. Not only because of their seamless combination of diametrically opposed musical subgenres, but because they still possess the power of singularity even as the likes of Deafheaven, Alcest, Svarti Loghin, Unreqvited, and Trautonist have joined them in crowding the corridors of black metal unorthodoxy. Case in point, “I Became You,” the first single from this, the band’s eighth full-length. It’s a song that, in addition to riddling black metal with 120 Minutes buckshot, thematically tackles maturity and growing up. Specifically, it’s about our parents being (mostly) right all along and how we (mostly) become more and more like them as the sands tinkle through the hourglass. Standing chin to jowl within a genre populated by perpetual one-uppers that would love nothing more than to have the masses believe they emerged from the darkest recesses of a succubi’s womb sporting a Funeral Mist long sleeve and the Nuclear War Now! catalog tucked under their arm, An Autumn for Crippled Children is adept at and have no problem acknowledging light within the darkness. The result is an apropos manifestation of their sound.

A basic dissection of their approach reveals the use of black metal’s chromatic atonality, harsh guitars, and frostbitten vocals augmented with waves of echo chamber reverb, a melodic sensibility straight from the pages of Melody Maker, floating keyboard swells that would have made Faith No More proud, and layer upon layer of synthetic orchestration. As an entity itself, All Fell Silent, Everything Went Quiet turns the banshee-like vocal coldness towards inhospitable territories, directs jangly guitars towards a caustic midrange that counterintuitively pumps out riffs from the outskirts of the alternative nation. And while the drum sound may mimic twigs slapping cardboard, it still effectively connects to the house Norway built.

The production value plays into the album’s copious strengths, oddball as they may be. The Lush meets Swervedriver meets The Real Thing volleying of “Water’s Edge” and pastoral collision of feathery guitars and lab coat synthesizers in the aforementioned “I Became You” are both solidly utilize the acerbic arts and soaring sweetness. The guitars in “Silver” nudge against college radio indie rock (think Pavement or a whole host of bands hailing from Athens, GA back in the day) and are augmented by classical strings and mop top snare flams. Darkness descends with the simple layered guitar melody in “None More Pale,” and the choral discord and creepy manner in which the strutting bass lines are brought up in the mix during album closer “Distance” directly contrasts the wide brimmed, national anthem march introduced by the piano.

What is now referred to as post-black metal/blackgaze ushered the sacred cow to the slaughterhouse long ago. We’re now at the stage where this collision of worlds is commonplace and popular enough that existence justification has been replaced by how well the combination is being executed. At this stage of the game, An Autumn for Crippled Children is an 11 year veteran stewing in the knowledge of how to knead the Venn diagram embracing sweetness and light, lovelessness, blazes in the northern sky, and the welkin at dusk. The still anonymous trio balances rawness and warmth, consonance and dissonance, and look beyond the use of sheer force in achieving the goal of expanding minds and crushing hearts. ~ Kevin Stewart-Panko