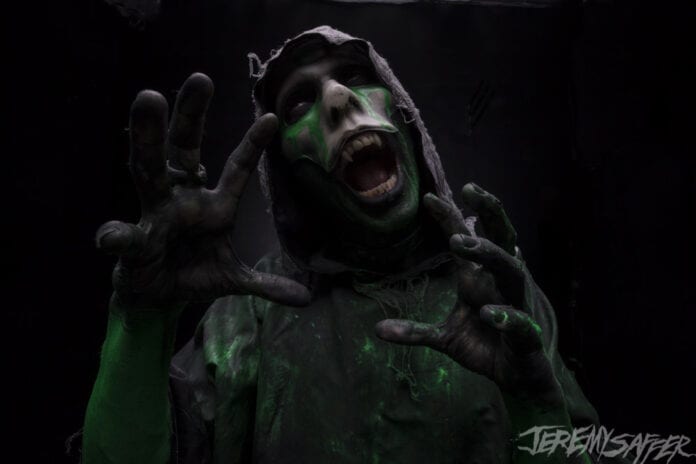 INTERVIEW WITH WEDNESDAY 13 BY ANABEL DFLUX
PHOTOGRAPHS BY JEREMY SAFFER

From new characters to an inside look into the creation of his highly anticipated new record, horror aficionado Wednesday 13 was just a few days away from releasing his latest album Necrophaze via Nuclear Blast Records when we got to pick the man’s unique brain.

Necrophaze is on the cusp of being released. How are you feeling about it right now?
I’m super excited! The title track was released on Friday the 13th. I’m excited because this track features Alice Cooper on it. I’ve been listening to it for the last six months, and I’m excited for everyone else to hear it. That’s a really big honor for us and for me just to have my rock ‘n’ roll hero on our record acknowledging that what we do is worth his time.

On the topic of the incredible guest stars featured on Necrophaze, do you have a favorite song or favorite film that each guest participated in their career?
Not necessarily. The guests on the record are all friends of ours and people that we’ve known for years. I’ve known Alice for a long time. We first met almost 18 years ago. We reached out to people and we didn’t know if we’d get a yes back. It was more like, “I hope they have time to do this.” Alice is my favorite artist of all-time, so picking a favorite song from him is almost impossible. I can’t say that about a lot of bands. Your favorite band will always become a part of you. To have him be a part of a recording, it still gives me goosebumps, so I’m really excited. People can hear that, and then when the record is out, they can hear the whole thing and put it all together, because it really flows like you’re listening to a movie. I wanted it to be something that you can listen to each song by itself here or there, and that’s cool. But if you listen to it from beginning to end, it ties the music completely. I wanted it to sound like that because that’s what I was going for. I always imagine our music being the background music for a movie or something like that. So, the cinematic approach is the way I’ve always done things. I like records that make me escape to someone’s world. That’s what I like to do with our records. It’s more than just recording the music. It’s all the stuff in between that built it up. I wanted to capture people’s attention and make it feel like you’re listening to a movie.

“I WANTED TO CAPTURE PEOPLE’S ATTENTION AND MAKE IT FEEL LIKE YOU’RE LISTENING TO A MOVIE.”

Did you find the process of writing this album to be more difficult or easier than your previous ones?
It was really easy. I was really in my environment and my headspace was the best I had felt in years. Especially during the recording sessions, it’s a time when you can get really frustrated, and that is just because you’re working hard on stuff. There’s always that kind of push and pull. This is the first time where it was just easy because I was able to go to the studio, come home, and be at my home every night. When I’m doing vocals and I’m working on the lyrics, I draw all inspiration going to my happy place. I can do that in my head a lot. I did that for years, but to actually go to my happy place, which is my home, it really helps. When I was creating this vibe for the record, all I had to do was to look around me. I’ve surrounded myself in all of this stuff that I grew up on. It’s never gotten old to me. In fact, it’s like I almost rediscovered it over the past year and it’s become even more fun for me now because I have access to a lot of horror things. There’s a whole weekend here in Los Angeles called Monsterpalooza. Everybody from my favorite movies are gonna be there. I get to run around with a VIP pass and dressed in my character, and I get to go hang out with people from the Phantasm movie and things like that. So, this is fun for me, and doing it in my 40s is amazing.

Are you a regular Monsterpalooza goer?
When I’m home, I am. I’ve been really fortunate and able to do a lot of conventions. I’m always at those conventions whenever I can. It’s a killer place to meet new people and like-minded people that love all of this. I made a lot of fans just at those conventions. Going to these conventions definitely helped whenever I record a new record. I have Caroline Williams on this record, who is in one of my favorite movies, Texas Chainsaw Massacre 2. She’s one of the voices at the beginning of one of the new songs.

“EVERYBODY KNOWS WHEN THEY SEE THAT GUY THAT HE’S ALWAYS GOING TO DIE FIRST.”

What’s your favorite horror stereotype?
That dumb guy in the hospital! You know, the guy that rolls the body into the morgue and is listening to his headphones and you know he’s going to die. That’s my favorite. Because everybody knows when they see that guy that he’s always going to die first.

The artwork for this album differs between the vinyl and the CD. Why did you go with this approach to have two different kinds of art?
That was all me, and it was something I didn’t know the label would even go for. I did that in the past. I just had an artist friend of mine who I’ve been working with start working on the cover, and I had another guy start working on the CD cover. And when I saw the covers, they were both amazing. I can’t choose, I can’t flip a coin. I can’t do any of that. So, I wanted to present the label with the idea of putting one cover on the CD and one on the vinyl. That way it makes them both unique and we can even put it in different colors and have different artwork and make it almost like a treasure hunt. You’ve got to collect and get all of these things! The label liked it. They said that it was hard enough for them to get their artists to give them one album cover, for us to come with two is really odd. So, they welcomed it! They’ve been super cool with allowing me to do my promo exactly how I want it. They let me do commercials and movie trailers—my vision of what I wanted to achieve and promote with this record. That’s been really, really cool. They haven’t said no to anything I came up with. So, it’s a really cool thing and they let me be what I want. That’s what makes me happy—doing weird, strange things. I get to be myself. I get to do what I do. I created the Wednesday 13 world and I’m just introducing a lot of new people to it. The old fans are following me this long. They’re getting to enjoy it at its top level because I have a label behind me, I have a team behind me. They’ve seen it from the punk rock level up until now. It’s incredible to see that transition as well. It’s been a long road. Sometimes I look back and I’ve spent my whole life playing music. I’ve released an album almost every year since I was 18, minus one or two, but I probably made up for it by releasing two albums in one year. So, it’s incredible.

“THAT’S WHAT MAKES ME HAPPY—DOING WEIRD, STRANGE THINGS. I GET TO BE MYSELF. I GET TO DO WHAT I DO.”

Is there a new character that corresponds with this new album?
He’s called the Necroshadow. On stage I just assume these roles and I just call that the Necrophaze character. The stage is where I really develop the makeup and everything and go all the way. I looked like a Masters of the Universe with a microphone instead of a sword or something. For now, I don’t even look like I’m real. I look like one of my action figures. You could get an action figure that comes with our record if you preordered and got the limited edition.

MIDNIGHT: Creeps Back In