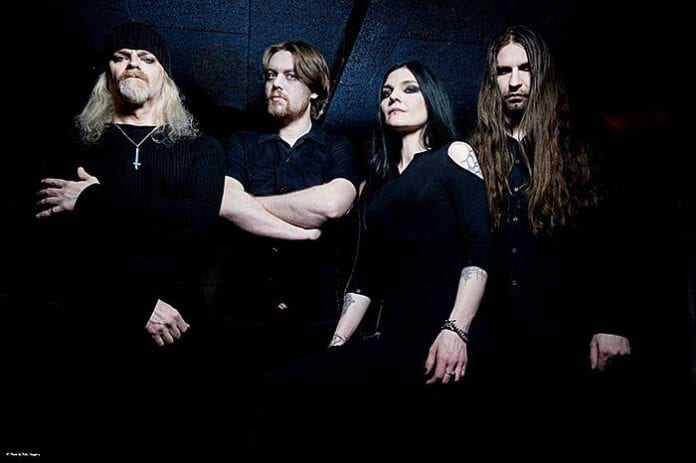 Triptykon has just released the band’s live performance of Requiem, a project that has been in the works for over 30 years. Performed at the Roadburn Festival in 2019 with the Metrople Orkest, this recording brings Requiem to life and is released in memoriam of Martin Eric Ain and HR Giger. Requiem (Live at Roadburn 2019) consists of three tracks: “Rex Irae,” which was released on Celtic Frost’s Into the Pandemonium, the newly written “Grave Eternal,” and “Winter,” which appears on Celtic Frost’s Monotheist album.

Along with the collaboration of the Metrople Orkest, the chosen conductor was Jukka Isakkila, Florian Magnus Maier served as the arranger, and the co-lead singer is Safa Heraghi. Here, Tom Gabriel Warrior discusses the meaning of Requiem, the evolution of the final result from the original idea, and what he can say about the next Triptykon album.

What does Requiem mean to you?
It’s two years of very difficult work during a difficult time in my life, and it was an immense burden on my shoulders to finish this. It was something I had to do. It wasn’t an easy task, and I’m glad I have it behind me and that it’s finished. I had to finish it. I owed it to Martin Eric Ain [Celtic Frost, bass], of course. Requiem, by its nature alone, was not actually a happy task. There are two people it’s dedicated to—there were two people who died recently. So, it has a very serious connotation to me.

“WE COULDN’T HAVE KNOWN IT WOULD TAKE DECADES TO FINISH THIS PROJECT, BUT WE HAD THE VISION FOR ALL THIS TIME.”

Compared to when you first had the idea several decades ago, has the vision or ideas changed?
No, it’s pretty much exactly what we envisioned. Martin Eric Ain and I embarked on this path to write, create, and perform Requiem. Of course, we managed to finish it within two or three years. We couldn’t have known it would take decades to finish this project, but we had the vision for all this time. I carried a basic idea for the full three parts of it in my head. I tried to be as true as possible to the original vision—what Martin Ain and I always had discussed—when we finished Requiem these past two years.

You tried to stay with the original idea as much as possible, but did anything change or improve with the final result?
Well, given that decades passed, of course. I’m a far more experienced musician by now. I’m a far more experienced producer. I have many more relevant connections in the scene. I know the people that are necessary to make such a complicated project a reality. I wouldn’t have had all of these resources if I had done this in the 80s. It would have been a far more amateurish event. I actually doubt we would have been able to achieve anything comparable. Now, I’m a veteran of the scene. I have very good management and a concert booking agency. I have connections to necessary people to do such a complex project, which turned out to be very crucial. That’s actually the positive side of having waited so long to finish this. I was able to do it on a far more professional level than ever before in my life.

“WE KNEW THERE WAS NOT GOING TO BE A REPEAT OF IT. WE WANTED TO CAPTURE THAT MOMENT.”

Why release Requiem as a live recording instead of going to the studio? Do you think the live performance gives it more power?
No, it was simply because this was the only performance ever of Requiem. It was a special occasion. It was a special event we played it on, and due to the complexity of going on stage for a band of our size with a full orchestra, this is something that is not repeatable. We knew there would be this one performance. We knew this was going to be the first performance, which would make it a very special event. We knew there was not going to be a repeat of it. We wanted to capture that moment. Because, if we wouldn’t have captured it, there wouldn’t have been a second chance. So, we captured, what was for us, a historic moment. And I’m glad about this, because otherwise, this would have come and gone, and there wouldn’t be a record of that event.

Compared to the original singer on “Rex Irae,” Safa Heraghi’s voice is a little different. Did you intend to have a new singer for that song?
The original singer for that song, Claudia-Maria Mokri, was, number one, a very flawed singer. But at that time, we didn’t have any access to a better singer. She was studying to become an opera singer at the time, and she was recommended to us by her sister, who used to work at the record company in the 1980s. We had to make do with what we had. She didn’t have any knowledge of English at the recording session, so it was very difficult for that reason alone. She wasn’t also very experienced, because she was still studying to become a singer. Even though it’s become, of course, a classic, the story behind it was far more complex. Also, Claudia-Maria Mokri distanced herself from the metal scene, in the meantime. Many years after the recordings with Celtic Frost, she contacted us and requested for her voice to be removed from the album and her name to be removed from all of the credits, the websites, my books. Which, of course, is completely ludicrous. It’s completely impossible. And we told her, as much, “Look, this album has become legendary. It’s released around the world. Everyone knows that you’re on it. Everybody has heard it.” So, she was very unhappy and she doesn’t want anything to do with heavy metal, that she loathes heavy metal. So, there was actually no chance to work with her, even if I wanted to work with her. I was actually very happy to embrace somebody new. I don’t like to repeat myself, and Safa Heraghi is, of course, far more superior. She’s a friend of ours, and she has far more experience with crossover performances than Claudia-Maria Mokri ever had. And I consider ourselves very lucky that we were able to work with her.

“THE NEXT TRIPTYKON ALBUM WILL BE A MOUNTAIN OF DARKNESS.”

You’ve been in the game for almost 40 years, but you still have new ideas and find ways to innovate as a musician. Why do you think that’s still important, to keep adding new ideas and being experimental?
It’s like declaring artistic bankruptcy, to keep copying yourself or others. Music, at the end of the day, is an art form. Art is not about playing it safe. Art is about having some courage, to risk something, and looking beyond the surface and putting your career on the line for your ideas—risking something for your ideas and your ideals. I can’t respect anybody who goes the secure path. For me, being a musician is entering a deal. You owe something to the world. If you’re granted this amazing career, if the audience gives you the chance to play the world, to tour, to record, to live your dream, then you owe something back. And that’s not playing safe. You owe the attempt to define at least some art, at least try it. It’s very lazy, at times, if you don’t use your career to try to do something new.

BORKNAGAR: A Constant in This Wild World

BRASS AGAINST: Brass Against the Machine