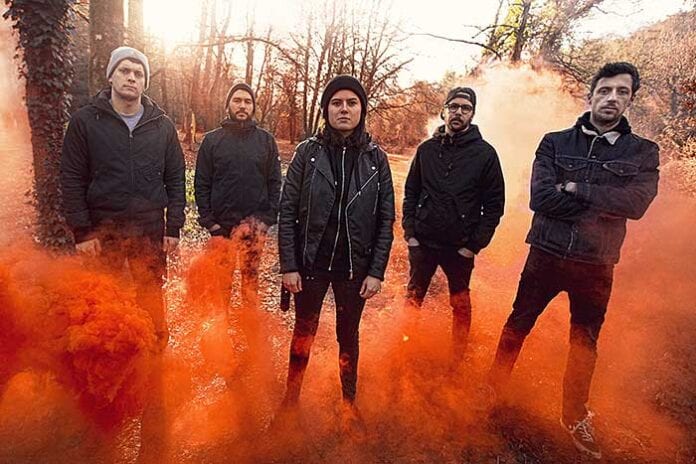 The first thing one notices about this five piece hardcore band from France is their moniker. It’s an unavoidable point of discussion, one that will either have people—and potential record label suitors, as you will see—running for the hills or justifying its use by claiming there were many worse and quite a few better band names they could have settled on. But hey, we’re using this space to talk about the band instead of a different outfit that went with something much more traditional and milquetoast.

Thankfully, Stinky backs up its nomenclature with a solid brand of melodic hardcore punk that employs notes of Sick of It All, Parkway Drive, and Comeback Kid. The band’s third album, Of Lost Things, recently saw the light of day via burgeoning Las Vegas based label M-Theory Audio, the release of which was celebrated via the virtual Hellfest at Home Fest held the weekend before we caught up with the band’s rhythm section, drummer Paul and bassist Antoine, for a conversation riddled with waist high language barriers and the fact that we often found ourselves meandering away from talking about rock to discussions and recommendations of recent Netflix shows.

What can you tell us about the band’s history?
Paul: We’ve all been friends for a long time…

Antoine: And we were all playing in local bands before forming this band. We all knew each other for years, and ultimately we formed this band. After several lineup changes, we’ve been quite stable since 2014.

And you hail from Clisson, the town that hosts Hellfest?
Antoine: Yes, but personally, I’m from Nantes and the rest of the band is from Clisson.

Clisson isn’t a very big place. Does this mean there was a smaller pool of musicians to choose from when forming a band?
Antoine: We were quite lucky. There are a lot of local bands around Clisson and Nantes, so it wasn’t hard to find musicians.

Paul: And there are a lot of venues for bands to play.

Do you find that Hellfest has brought your area more attention, and how has that helped you?
Paul: Of course.

Antoine: Definitely, yeah. It helps all the local scenes—punk, metal, hardcore, rock ‘n’ roll—because there’s a lot of attention from the media, the scene people, the promoters, and even other bands. It’s a very positive thing.

“THE IDEA IS THAT THE NAME ALSO REFLECTS OUR ACTUAL SOCIETY VERY WELL.”

Was Stinky your first choice for a band name?
Paul: (laughs) Yeah, yeah. It seems curious to some, and we know it’s a strange name and kind of dumb, but it’s a wink to Rancid. The idea is that the name also reflects our actual society very well.

Are you aware of the other Stinky, the pop band from Indonesia?
Antoine: Yeah, yeah, we know (laughs). It was a bit of an issue a few years back with all the legal stuff and the rights stuff, but it’s all clear now.

Paul: But we do share the same page on Deezer, so it’s quite annoying, but that’s life.

Do you find yourselves spending a lot of time justifying or explaining the name?
Antoine: Yeah, you could say that (laughs).

Paul: And there are different reactions from different parts of the world.

Antoine: Americans don’t seem to like it. They find it a bit strange, a bit silly, and don’t really get it, but European people don’t really seem to care.

Paul: Maybe it’s because that sometimes they don’t understand the name? It is something that we are aware of and we deal with it.

Antoine: But we haven’t played a single show yet in North America. One of our guitar players has been to New York on vacation, but none of the others of us has even been there. We would like to tour someday.

Paul: We’ve played shows in something like 15 countries, but only in Europe so far.

Having never played in America, how did you come to the attention of M-Theory?
Paul: We worked with a management agency called Hymn Media in Europe and in France, and the owner of the agency was in contact with Marco [Barbieri] and he suggested us. There were a few emails sent back and forth, and Marco came to us. We started to talk and that was it.

Was there any other US or North American interest for the new record?
Paul: No. He was the only label that was interested.

Antoine: Some American labels said that our music was cool, but they couldn’t deal with a band called Stinky. We weren’t even on any of those labels and there was already an issue with the name (laughs).

“SOME AMERICAN LABELS SAID THAT OUR MUSIC WAS COOL, BUT THEY COULDN’T DEAL WITH A BAND CALLED STINKY.”

Was there anything you were trying to do differently on the new album?
Antoine: Yeah, definitely. We wanted to use different sounds and new stuff like different tempos, different song structures, and even some different instrumentation, like pianos, acoustic guitars, and violins. It’s really different than previous albums.

How long did you work on it?
Paul: For more than a year.

Antoine: It was written in one solid time period. We didn’t play any shows or go on tour while we were doing it. It was just writing.

Did you use the same studio and producer as previous albums?
Paul: Yeah, it was the same team that worked on the previous records. All the instruments were recorded at one studio and the vocals were done at another studio.

How long ago was the album finished?
Paul: It was done in something like October. We had to find a label.

Antoine: At first, we didn’t have a label set to release it when the record was almost complete. We were in search of a good deal and a good label to release it. That took more time before we found M-Theory and that is a worldwide deal, which is good for us.

“THIS ALBUM REFLECTS LOST MEMORIES AND IT REFLECTS EMOTION TOWARDS SELF-REFLECTION.”

Is there a particular theme to the album and story behind the cover art?
Paul: Like our previous album, it’s very metaphoric. This album reflects lost memories and it reflects emotion towards self-reflection.

Antoine: The artwork is connected to many of the themes in the lyrics, and they are linked together. It’s a bit hard to explain, but it’s like a metaphor for a safe haven that’s been destroyed, and that’s shown by the house on the cover that’s burning.

Has Claire [vocals] always sung in English, and does she have difficulty expressing herself in a second language?
Antoine: In this band she’s always sung in English. She does find it difficult, but she’s working on getting better at English. Actually, one of our guitar players does the lyric writing with her. The lyrics are written in French, and they do some translation work. Then, we rewrite the lyrics to mesh with the music. So yeah, she’s getting used to it.

You’ve already released three videos for songs from Of Lost Things. When were these done in relation to when the world went to hell?
Paul: The first one, “Revival Fire,” was originally shot at Hellfest in 2019.

Antoine: “Strangers with Familiar Faces” was actually done a little bit before the pandemic lockdown, and “Distance” was edited and finished during the lockdown, but the footage is taken from the road, on stage, and backstage stuff.

Paul: It’s a recollection of the good times we’ve had on tour before the lockdown.

How did the pandemic impact your touring plans for 2020?
Antoine: We had shows and summer festival shows that were mostly in France booked, and everything got postponed or canceled. We were supposed to do our first Japanese tour in April, and that was postponed, probably until next fall.

Paul: We hope (laughs). Our summer has been canceled, but we have two shows scheduled for late August in France. We’ll see if they still happen.

“WE DON’T KNOW WHICH INFORMATION TO TRUST BETWEEN WHAT OUR POLITICAL REPRESENTATIVES ARE SAYING AND WHAT’S ACTUALLY HAPPENING.”

What is the pandemic situation like in France?
Antoine: I think there’s been a decrease in cases and it seems like there’s been more medical control over it, but we don’t know which information to trust between what our political representatives are saying and what’s actually happening. There is always a difference, so we don’t know what to trust or believe right now. We’re still being careful, we’re still wearing masks, not going out much. It was really strange because our president said to the people that he would do anything that was possible for him to protect the French people, but he also wanted us to go out to work. And you see how silly that is because all we wanted to do was stay home and stay safe, but he pushed people to keep working, to keep going out, and it was hard for us to deal with it. We had to deal with some unemployment, some money difficulties, and it was really weird for us.

Has what’s gone on in the world made you look at your own lyrics and themes any differently?
Antoine: Oh yeah. We actually discussed with some people who found that this particular album is coming out at the right time and is almost like the right move to do because it fits with what’s going on on the news and the actual state of the world. But it’s totally a surprise because it wasn’t what we planned for the album to be, because like we said before, the record was done almost a year ago, so it’s totally a coincidence.

Have you been taking advantage of the lockdown to write new material, even though the new record has just come out?
Antoine: We are doing a little bit of that, writing riffs that we will maybe use in future songs and taking down ideas. But we are mostly working on the promotional stuff for the new album, doing interviews, answering questions, doing label stuff, merchandising, music videos. We’ve got a lot of work on our plates, which is good for us.

ENTER SHIKARI: A Sense of Community and Beauty