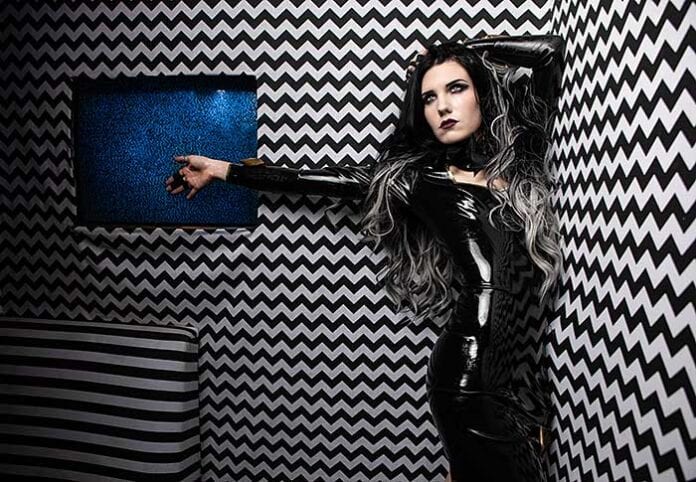 Despite the tragedies of 2020, musicians are finding that their creative juices continue to flow as they create new artwork for the world to enjoy. Sammi Doll is one such musician, taking this year by storm in releasing her debut solo song, independent of all of the other musical endeavors she has lent her talent to. Likely best known for her work with IAMX, Bullet Height, and recently Kat Von D, Sammi has diversified herself to create music that is all her own. We had the pleasure of picking her mind and diving deep into “AN OM IE.”

“THIS IS THE FIRST TIME I’M RELEASING ANYTHING AS A SOLO ARTIST, SO THE DIY VIBES HAVE BEEN VERY HEAVY!”

With the debut of Sammi Doll’s music video, emotions were stirring. “This is the first time I’m releasing anything as a solo artist, so the DIY vibes have been very heavy! I feel amazing now that it’s out. We were working on the video for so long due to COVID-19 restrictions, but it really allowed me to focus on developing the characters a bit more to fit the theme of the song,” Sammi chimes.

With Sammi—known to be a part of a slew of other projects, whether as a keyboardist or backing vocals—releasing something with just herself in the forefront was a new experience. “Honestly, I didn’t know what to expect. I’ve been involved in a few music videos for various projects, but always with the support of another artist or band behind me. The response has been nothing but positive and it surpassed all my expectations.”

It is no secret that Sammi has amassed quite an online community behind her, with thousands of eager followers on social media. But with so many eyes comes the risk for scrutiny or disenchantment, which was wonderfully not the case with “AN OM IE.” “I’m so happy people can connect with the imagery. It just means there’s plenty of weirdos like me out there that totally get what I’m doing,” she tells us. Even the current COVID-19 pandemic couldn’t alter the perception of this project. “As long as there is emotive expression, there will always be music. Art will always prevail. I feel we will come out of this stronger than ever. The pause has really allowed people to appreciate the experience of live music. It’s the whole ‘you don’t know what you have until you lose it’ concept.”

So, what exactly pushed Sammi Doll to step out of her shell and set out into the industry on her own? “Every artist I’ve played with has helped me build the confidence to branch out on my own. I think what held me back from doing it earlier was the belief that I needed the support from a ‘band’ to get myself out there, or the fear that if I released anything under my name it would be seen as an ego move. And the direction of the forthcoming singles is too far away from the genre that my previous band, Bullet Height, had been creating. Although I was very much in my head about it for a long time, I think it was convincing myself that I could stand behind my creation and own it. The success and failure is entirely up to me. I’m very proud of this music and that’s all I needed to remind myself,” says Sammi. This finding of confidence can be considered quite an inspirational journey for all musicians trying to discover their own voice in their art.

“EVERY ARTIST I’VE WORKED WITH HAS HELPED SHAPE ME INTO THE ARTIST I AM TODAY AND WILL BECOME TOMORROW.”

That being said, Sammi certainly has had extensive experience in the music industry throughout her artistic career. From her beginnings with My Satellite, all the way through IAMX, Losers, Bullet Height, and most recently Kat Von D, all of these projects contributed to her art today. Sammi tells us, “I was so green when I joined My Satellite. I was still learning how to become confident on stage and be the best support for the singer, Bryan [Stage]. I couldn’t have done any of this had I not stepped on stage with them. IAMX took me to a new level and released a confident energy I didn’t realize I had inside me. I love and believe in the music and message so much, every night on stage with them is the best night of my life. I’ve really grown as a performer over the years with them. They are some of my best friends and they’re responsible for the best years of my life. The new venture with Kat is so exciting! When the lockdown was first issued, I moved into her guest house with my cat and we worked on adding additional programming to her forthcoming album. Through that process, I unlocked some of the mental roadblocks I felt I had as far as recording ideas on my own. Every artist I’ve worked with has helped shape me into the artist I am today and will become tomorrow. I’m so thankful for the endless creatives I have inspiring me daily.”

To touch on the aesthetic of the video itself, “AN OM IE” features a series of vignettes, made up of a slew of locations, costumes, and more. With such a variety of imagery present, filming this project was no simple task. Sammi Doll recounts, “When I first met with the director, Ron Underwood, he brought the concept of vignettes to the table and referenced Nine Inch Nails’ ‘The Perfect Drug’ video. I started to create characters that embodied what ‘AN OM IE’ means to me in our current society.” With art always being a significant commentary on our world, “AN OM IE” touched a series of topics that Doll wanted to express. “A few examples being the faceless leather daddy sitting at the breakfast table, who is going about his morning routine drinking coffee and reading the paper, completely blinded to what’s actually happening in the world. Or the Burlesque Bloody Pig character that represents the beauty standard, but at what cost?”

This leads to the team behind “AN OM IE.” With a small army involved in this endeavor, it’s curious how everyone came together. “My manager, Elias Mallin, used to play in the band Opiate for the Masses with Ron, so he set up a meeting for us to have a discussion about filming the video,” she says. “Ron’s energy and enthusiasm for everything is contagious, and I knew we would create something really cool together. It was a small team of my extremely talented friends that donated a lot of their time to get weird with me. I think it was as simple as a phone call. ‘Hey, do you want to come to the studio with me tomorrow? I need you to get bloody, hang with an octopus, and take some behind the scenes footage.’ And the team was there! No questions asked! (laughs)”To quickly go over the talents behind “AN OM IE,” some of the names lurking around include Ron “Thunderwood” Underwood, Anabel DFlux, Danny Finn, Paul Mulle, Angelina Sambrotto, Meghan Sanders, Elias Mallin, Evan Rodaniche, Franccesca De Struct, Kirsten Bolton, Ritual Fashion, Anti-Foundation, Maribaal Clothing, Mother of London, Rannka, Erika Bess Flora, Tom George, Sean Beavan, and Juliette Beavan.

Speaking of Sean and Juliette Beavan, Sammi expressed the story of how “AN OM IE” found itself to be a song in the first place. “I wrote the song with Sean and Juliette Beavan. They really helped me gain confidence in writing and they’ve been mentors in pushing me in the solo direction. I feel most of the time I don’t actually know what I’m doing and all my ideas are shit (laughs), but that’s every artist! They really helped curb those insecurities and thus ‘AN OM IE’ was created. I told Sean a handful of songs I was inspired by, and he sent a track that would then go on to be the bones of ‘AN OM IE.’ The first word that came to mind was ‘enemy’ and the first melody I wrote was the hook ‘You’re the Enemy,’ which was how the lyrics of the song began to form.”

“WE, MORE THAN EVER, LIVE WITHIN AN ANOMIC SOCIETY AND WE ARE OUR OWN WORST ENEMIES.”

As to how the video came together, it was a bit of a more spontaneous endeavor. No matter how much one tries to plan everything down to the most miniscule detail, a do-it-yourself project doesn’t lend itself to being perfectly in line with plans. “In the world of DIY, nothing ever goes exactly as you anticipate, but that’s what makes it exciting. I had to make the concept of the video align with the meaning of the song. ‘AN OM IE’ refers to the anomie theory by French sociologist Emile Durkheim. It’s social disintegration. It states, ‘Individuals in a society are in permanent competition with each other, expect much of existence and demand much of it and find themselves perpetually haunted by the suffering that arises from the disproportion between their aspirations and their satisfaction.’ We, more than ever, live within an anomic society and we are our own worst enemies. I had an explanation of all the vignettes and why they were important. Ron took the lead with his vision of the edit, and I sat with him through a few minor timeline reveals and color changes. He’s great and totally understands the vision, so it was a fairly organic process,” says Sammi.

Live music is currently on pause and bands are diving into live streaming to make up the void. Sammi herself was able to participate in an incredible live stream performance at the famous Bourbon Room in Hollywood. Performing with her full band, she found that this set up didn’t provide too many terrible challenges with converting a performance into a virtual concert. “Honestly, I was very lucky to get involved with the Bourbon Room in Hollywood last month. They have really set the bar for multi-cam, live streaming performances at their venue. It’s run by a bunch of musicians who want to make the entire process easy and extremely customizable for any artist, from acoustic numbers to full band performances, like mine. I went in about a week before my performance and programmed the lights for our set, just as it would be executed for a real concert. I felt so fortunate and thankful to be one of the few artists that was able to perform on a stage in 2020, but also reach so many fans and followers that wouldn’t have been able to attend for geographical reasons. The timing was perfect as well, as it was in support of ‘AN OM IE’”

As to what the future holds for Sammi Doll, she was able to share some tidbits of what’s ahead. “The plan is to release a series of singles to keep the project current. There’s so much blood, sweat, tears, and time that goes into creating a full album. So much of yourself is given away all at once. I think it may be different if we weren’t in COVID times and I needed something to support a tour, but for now and the foreseeable future, I feel spreading myself out with singles is the way forward.”