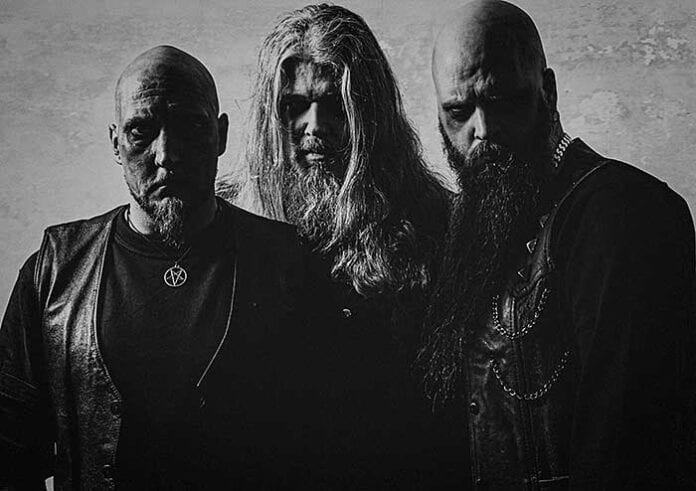 After eight years of relative silence, Naglfar has reemerged from the darkest depths of Sweden to once again grace us with their distinctly chaotic brand of blackened noise in the form of their seventh studio album, Cerecloth, released by Century Media. Recently, we had the privilege of talking to guitarist and founding member Andreas Nilsson about Naglfar’s return, his thoughts on Cerecloth, and the future of the band.

It’s been the better half of a decade since your last studio album. Was it difficult getting back into the swing of things after so much time since Teras?
Yes. Although it’s been a few years since the last studio album, I think a lot of people don’t realize that we were still active here and there throughout those years, so in our minds we never really went away. At one point after Teras, our contract with Century Media had run its course and we were enjoying ourselves. We were still getting offers for a decent amount of European festivals, so we rode that wave for a bit. Kris [Olivius, bass] and I both have kids, and without a label to pressure us, combined with festival offers still coming in, it was quite easy to lose track of time. We had been writing here and there, and at one point Century Media contacted us and nudged us so to speak, letting us know they were still interested in doing another record with us. So, that sped up the process a bit, but all in all, it was a very organic process and not having time constraints enabled us to put out something we are all genuinely proud of.

Roughly eight years have passed since Teras. Now that Cerecloth has been released, how do you see that affecting Naglfar’s plans going further?
As I said before, playing sporadically all throughout that time period in between Teras and Cerecloth kept us pretty fresh, so the change was minimal getting back into the studio. Now that we have another album, obviously things are picking up a little, but even so, we have never been the band that tours relentlessly. We all have other interests and obligations outside of Naglfar, so going forward I wouldn’t expect to see that change too drastically. You can absolutely still expect to see us on a decent amount of European festivals as soon as things return to normal, and you can definitely expect to hear a good amount of Cerecloth.

“THE MOST OVERWHELMING FEELING IS THE SENSE OF PRIDE AND ACCOMPLISHMENT.”

Speaking of Cerecloth, how does it feel to have the album released?
The most overwhelming feeling is the sense of pride and accomplishment. We worked very hard on this one and are subsequently very satisfied with the results. It’s always a bit surreal, seeing these songs you started writing years ago come to light and to be finally released out into the public. It feels like a major weight has been lifted off of my shoulders, and the fans love it, so if they’re happy, we’re happy.

Digging deeper into Cerecloth, what does the album mean to you?
Well, there is not a continuous concept across the whole album, so it’s a bit difficult question to answer. We thought Cerecloth was appropriate for the title track because of its meaning and the album’s relation to death as well as the current state of the world, but overall the album is really open to interpretation, and that’s the beautiful thing about music. Ideally, I’d like the fans to listen to the album and be able to formulate their own concept of what it means to them, on a personal level, without being influenced by our own thoughts or ideas in regards to the material.

Naglfar has been through a few lineup changes over the years. How do you think that has affected the writing of both Cerecloth and other past albums?
Honestly, I’d say the changes have left the music pretty much unaffected. When Jens [Rydén, vocals] left, that was really the only major change we had and that was well over a decade ago at this point. Around the release of Teras, Marcus [Norman, guitar], Kris, and I all agreed to keep it a three piece in regards to the writing. We still tour with a full band, but the heart of Naglfar has really been the three of us for quite some time and I don’t see that changing anytime soon. I’ve known Kris since high school and Marcus close to 40 years now, so we’re all very close and work great together. We will always tour with a full band, but keeping the writing process between the three of us has always seemed to work best.

“THE HEART OF NAGLFAR HAS REALLY BEEN THE THREE OF US FOR QUITE SOME TIME AND I DON’T SEE THAT CHANGING ANYTIME SOON.”

What is the writing process for a Naglfar song?
That answer changes a bit from album to album. I know back with Teras, we would all meet up at Marcus’ house and exchange riffs and ideas, and the album came to fruition overtime just bouncing ideas off each other in that regard. Cerecloth was different because we are a bit older and have more outside obligations, so writing this album, we were still collectively sharing ideas and melodies constantly, just in different ways. Technology has increased substantially over the last decade, so we were able to share ideas with each other digitally much easier this time around, and as a result we maybe didn’t meet up in person as much as we previously would during the writing process, but that’s not to say the connection wasn’t there. The process was just a bit less defined, enabling us to really write the album on our own terms. As far as the formulation of songs, Marcus and I write most of the riffs together, and we’ve really gotten it down to a science where we can remove our egos from the picture and are comfortable critiquing and changing each other’s ideas until we come up with something we’re all happy with.

The label of “satanic black metal” has become a blanket term for several genres of extreme metal, and Naglfar inevitably falls into this category more often than not. If you could classify Naglfar yourself, what subgenre do you think you’d choose?
For us, it’s always been a mix between black and death metal, and I don’t think it really needs any further classification. Obviously, we have some anti-Christian and satanic themes spread out variably across our albums, but the material also encompasses a lot of other concepts and it’s easy for that to get overlooked. If someone wants to call us “satanic,” I don’t think that any of us would mind, but at the same time, we all have different beliefs and the band itself does not wish to be viewed from any specific spiritual or religious standpoint. At the end of the day, it’s not important to us how we are classified, the music is what matters.

“IT’S NOT IMPORTANT TO US HOW WE ARE CLASSIFIED, THE MUSIC IS WHAT MATTERS.”

Looking back on the past few decades, was there any moment that really stood out to you that defined Naglfar?
That’s a great question. Obviously, every time we write an album, it brings something new to the table and is a milestone within itself for the band. As far as specific moments in time, the big festivals always stand out in my mind. I’ll never forget the first time we played Wacken, just looking out over the crowd and seeing an endless sea of people. That was really humbling and a feeling I won’t soon forget. I think we all enjoy the big festivals because you get to experience stuff like that, all while mingling with friends and other great musicians. Whenever Naglfar plays a festival, it’s a great opportunity to see what other bands in the same demographic are doing around the world. It’s always a fun time.

Any favorite tracks on the new album? Anything you’re looking forward to playing live?
I really like playing “Vortex of Negativity.” It’s a bit simpler to play than some of the other new songs, which translates to more freedom to move around and have fun with it onstage. “Last Breath of Yggdrasil” is another I’m pretty excited about because I was the primary composer on that song and it has a bit more personal meaning for me. “Cry of the Serafim” also has this really fun death metal influence with a heavy, crawling groove that I really like. I’d say it comes down to those three, personally.

“WE REALLY MOVE AT OUR OWN PACE AND THAT CAN BE HARD FOR SOME TO COMPREHEND.”

What can we expect to see from Naglfar in the future?
That’s a bit hard to answer because I think we really move at our own pace and that can be hard for some to comprehend. I remember doing interviews for Teras where people thought the five year gap was a long wait, and needless to say it was even a bit longer with Cerecloth. The funny thing is while fans see that as a long time, it seemed pretty organic and comfortable to us. We never want to rush anything, and that’s obviously worked for us in the past, so I’m hesitant to give any definitive answers, but we are always writing and formulating new ideas. I can’t make any promises, but I can say that Naglfar has no intention of slowing down in the near future. You’ll just have to keep a watchful eye.