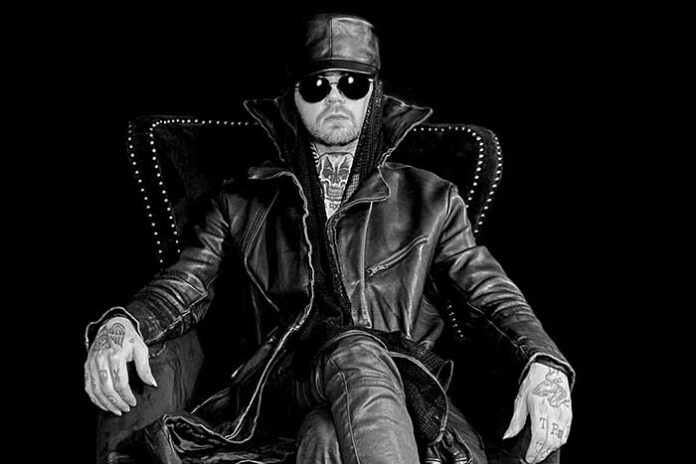 INTERVIEW WITH GOST BY ANDREW CRAIG
PHOTOGRAPHS BY GOST

Gost is still largely referred to as a synthwave artist, but on his new album, Rites of Love and Reverence, he continues the path his band began to forge on 2019’s Valediction—much more in line with artists like Skinny Puppy, Front Line Assembly, and Ministry. Synthwave and darkwave music tend to have a club atmosphere, even if it’s more metal related, but Gost now occupies a much more industrial avant-garde space.

“I’ve been trying since the last record to incorporate more of my influences,” Gost says from his home in Texas. “Not to necessarily break out of the synthwave mold, but I’ve been doing the synthwave thing now for six to seven years. So, as an artist, I didn’t know how many more ways I could make those sounds before it started to feel like I was beating my head against the wall creatively. I thought I needed to progress in some sort of way, and I’ve always liked the 90s industrial and everything I grew up listening to. So, that’s an easy thing to add to the sound.”

There are also moments on the new album when the sound gets even older than that. Introspective quiet moments that evoke thoughts of more romanticized 80s gothic music, as well as John Carpenter’s classic scores, are both elements that seem essential to modern industrial.

“Absolutely, very deliberate,” says Gost excitedly. “I’m a huge fan of The Sisters of Mercy and Fields of the Nephilim, and all that stuff as well. John Carpenter’s arpeggios are a huge influence on me and on a lot of what we do. I try to use as many influences as possible to morph it into something that’s mine and something that’s modern sounding. Earlier on, I would try to pull more from a nostalgic point of view, but now I’m definitely using it as a catalyst to make something more modern.”

Gost’s more recent music also has a lot more in common sonically with modern horror industrial. His image, however, seems much more grounded and his lyrics feel more detached from that kind of subject matter.

“It was much more important to me early on,” he says. “I still love horror. I think horror music and industrial music, they’ve always gone hand in hand. Even metal people, we’re all fans of that genre for whatever reason. They’re both dark, both diminished chords. I wouldn’t say personally that it’s important to me if it ties to horror movies, but that just naturally happened.”

“IT’S MORE ABOUT PERSECUTION AND OPPRESSION BORN OUT OF MISUNDERSTANDING AND FEAR.”

Rites of Love and Reverence is specifically inspired by witchcraft from a feminine point of view. Pop culture interprets witchcraft in wildly different ways. Sometimes it’s empowering, but other times it can be very negative and still has a lot of stigma around it.

“It’s not just about witchcraft from the feminine perspective,” he says. “It’s more about persecution and oppression born out of misunderstanding and fear. I was writing a lot of this during the height of the pandemic. We’ve gotten into this online culture of crucifying people we don’t agree with and ruining people online over things they said 10 years ago, and it feels like we haven’t really moved on that much as far as doing that. It really felt like an easy segue to me as far as witchcraft, the movies of the 90s about witchcraft, and Salem being an interesting subject anyway, but tying it into how we’re interacting with each other online nowadays. It feels like we haven’t moved on that much as a culture whenever a mass group gets behind being scared of change, if that makes sense.”

In the genres Gost travels in, there can be a lot of ambivalence to things that aren’t music related. In terms of the album being from a feminine perspective, he regards this album as political commentary that he’s passionate about.

“It’s something I absolutely feel passionate about,” he says quite seriously. “I don’t know if I feel like it’s just political. It’s more social, because it happened on both sides of the political aisle. Obviously, one more so than the other. But sexism, even in our industry, is still very prevalent. I’ve witnessed it firsthand. I’m not sure even how my voice would change things, but it’s definitely something I recognize and something I clearly wanted to talk about on this record.”

Gost has had a lot of time off recently. With his move towards industrial he’s had some ideas as to how this more intense sound is going to be represented on stage. The album art from Rites of Love and Reverence is going to be a big part of it, and he hopes to add a live drummer and more elaborate lighting. While he’s already got some tour plans, he’s become less optimistic about them in recent weeks.

“AFTER EVERYTHING GOT PULLED FROM UNDER US THE FIRST TIME, I’M NOT TOO OPTIMISTIC ABOUT IT.”

“It was looking pretty good there for a couple months, and then the vaccines and the people against them started to taper everything off and we’re on the rise again,” he says, sounding dejected. “So, we’re booking a tour for this winter. After everything got pulled from under us the first time, I’m not too optimistic about it. Obviously, we have no infrastructure for something that affects us on a global scale. I want to, but my hopes aren’t very high. It’s been difficult financially for the entire industry, which makes it harder for me to watch people not do what they can do to make things better. Smaller venues were struggling and closing down during the first round of all this. If it happens again it’s going to be devastating to our industry. I don’t know how many people are going to stick it out. I’ve been feeling really negative about it these last couple weeks, but I live in a really conservative part of Texas. I think we’re only 35 percent vaccinated.”

Despite the current circumstances, artists like Gost loosen metal up a bit. Maybe half of the metal community only listens to metal, but it’s always enjoyable seeing metalheads go to a darkwave show and dance with everyone else. That’s synthwave and darkwave’s gift to the metal community.

“I think it’s great, and I grew up playing metal,” he says, now sounding more upbeat. “As long you keep an open mind, I think it’s great to mix genres. Progression in art only happens when artists can collaborate in a positive way, and if me touring with Mayhem opens a few eyes on that tour, then that’s great. Like you said, the metal community is broken up into purists and the ones who are willing to branch out. I think it’s important for everyone to branch out and give artists a little bit more space than we’ve gotten lately, because it creates a better environment for creators and listeners.”

“IT’S GREAT TO MIX GENRES. PROGRESSION IN ART ONLY HAPPENS WHEN ARTISTS CAN COLLABORATE IN A POSITIVE WAY”

Rites of Love and Reverence is Gost at his most personal so far. It’s influenced by some of the most iconic gothic and industrial acts of all time and interpreted through his modern synthwave sensibility. Sonically intersectional artists like Gost are making music that thrives on multiple levels, and the melodic harshness of this new album serves as good comfort in uncertain times.

“This is my most open record as a human and an artist,” he says. “I’m not trying to be any persona or necessarily create some grandiose thing. If you enjoy it, that’s great, try to keep an open mind. If you’re an artist and you’re listening to it, take what I’ve done and make it better.”