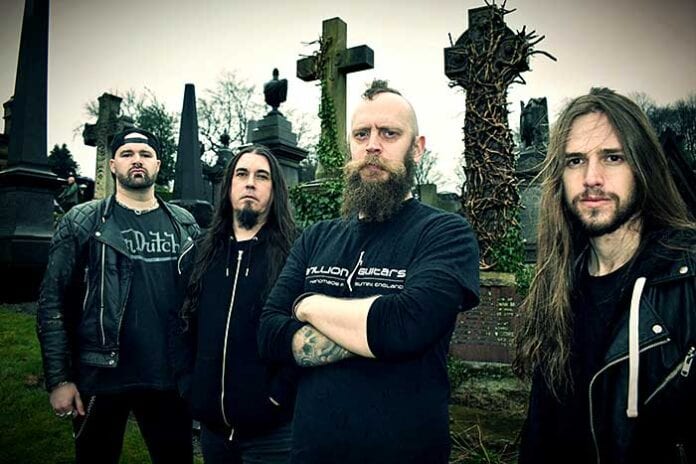 UK thrashers Evile have returned with a revamped lineup and its first new album since 2013. Formed in 2004 in Huddersfield, West Yorkshire, England with the Drake brothers Matt (vocals/guitar) and Ol (guitar), Ben Carter (drums), and Mike Alexander (bass), the band has endured several significant member changes. After riding a high from its first two stellar full-length albums, Enter the Grave (2007) and Infected Nations (2009), tragedy struck the band when Mike was stricken with a fatal illness while on tour supporting Swedish death metal horde Amon Amarth and passed away in 2009. After recruiting current bassist Joel Graham, the band carried on and released a further two full-length albums.

In 2013, guitarist Ol left the band but returned in 2018, while his brother Matt left the band in 2020 due to health reasons. On the band’s blistering fifth full-length, Hell Unleashed, Ol takes over lead vocal duties, as well as handling all lead guitar parts. During our conversation, Ol talks about his return to the band, his brother’s exit, the new album, and what the future holds for Evile.

What was your brother Matt’s reason for leaving the band?
He’s had a few health scares, and it just came down to where he wasn’t into it anymore. We waited for vocals and lyrics for a whole year, and nothing happened. I think we knew it was coming, so we have to deal with it.

Were you nervous or apprehensive taking over lead vocal duties? Were you previously known as a singer?
No, not really. I did backing vocals and that’s about it. I was pretty nervous, because to be able to sing and keep it sustainable on tour is really hard. I’m working with Melissa Cross [famed vocal coach] at the moment. She’s helping me out. I’m learning as much as I can. I’m doing pretty well. I’m not as nervous anymore. I’m quite confident.

“WE WERE MAINLY GOING FOR AGGRESSION.”

Although the dynamics of your vocal range is different from Matt’s, it gives the music more of an aggressive and gritty edge. What did you want to achieve with your vocals?
We were mainly going for aggression. I do have a better range than what’s on the album, it’s just these songs didn’t really call for lots of melody. When we’re playing live—when we play our older songs—I’m still going to sing them with the melodic lines and everything like that. People think I’m going to do death metal vocals over our ballads and stuff. I can sing properly, but on this album, it just didn’t work. So, it had to be aggressive.

Do you feel like the momentum of the band from time to time has been halted, especially after the death of Mike, you leaving then coming back, and then Matt leaving? Is this “never say die” attitude what leads to your perseverance?
Our activity was never really down, it’s always been up. Until I left in 2013, that’s when it went down. So, when I wasn’t in the band for five years, the band didn’t really do anything. They didn’t write any new music. They did a handful of gigs, and I came back in 2018. We started rehearsing again and then Matt lost interest and then this COVID shit happened. It’s just all been like one thing after another, really. We’re waiting to get back on track. It’s not going to be as busy as it was before. We’re older, we have kids, we have bills, and it’s just going to be whenever we can do it, we’re going to do it.

You left the band in 2013 to concentrate on your personal and family life, and then you rejoined in 2018. What led to your exit?
It was kind of similar reasons. You get to a certain age and being in a band, I put all my time into it. A lot of the time I didn’t have a job and I was writing all the time. I was emailing, sorting everything out, and it became unrealistic, really. You need to pay bills and it was unsustainable. It reached a point where I thought, I can’t tour for two months and come home and make $12. It makes no sense. With rejoining, I realized that unfortunately, people in metal bands have to treat it as a hobby now. People don’t buy music anymore. I wish they did. I wish they’d buy our albums, but not a lot of people put money into artists anymore and it has to be a hobby. We all need jobs, and the music is on the side.

Evile’s last album, Skull in 2013, was a bit overlooked.
I don’t really know what happened with that. For one, I didn’t really like the artwork for the album. I think the artwork made the album suffer. It wasn’t supposed to be that art. The label just seemed to lose interest on the fourth album. They came into the studio and they just did not seem interested in what we were doing. A lot of things went wrong with the album and then I left. So, it wasn’t really toured.

Speaking of the album artwork, for Hell Unleashed, you got the great Michael Whelan back, since he created the art for Infected Nations. How did you get him for this cover and did you discuss much of the concept beforehand?
I was talking to him for a year or so before we even started doing the album, because I wanted to work with him again. I sent him some new music and he really liked it. The art already existed. Michael is, for a lack of a better word, a legend. I told him that we didn’t have tens of thousands of dollars and if he had any previous art that we could license from him. He listened to the songs and said he had a few ideas from the music. He sent five, maybe six ideas of work that he’d previously done. When we saw it, we initially didn’t really like it. It wasn’t until we zoomed in and put the Evile logo on it that we thought it looked really cool. So, we asked him if we could use that one, and he said yes.

“I JAM ON THE SECTION UNTIL SOMETHING CLICKS, AND THAT TELLS ME WHAT THE SOLO IS SUPPOSED TO BE.”

As far as your guitar solos, do you handle all the leads on Hell Unleashed or do you share them with Adam?
Adam joined the band too late in the process. All the music was written in July 2019, so a lot of the solos were already done. And I’m greedy, so I didn’t want to give any of them up! When we do the next album, Adam will be fully involved. He’ll do some solos here and there. In terms of my solos, I’ve always looked at them like, it sounds stupid, but I’m trying to figure out the solo as I’m writing it. I don’t just play anything. I jam on the section until something clicks, and that tells me what the solo is supposed to be. Then I’ll build on that. I look at it like the solo is already written and I’m trying to find out what it is, if that makes sense. That’s my process.

Speaking of Adam, he’s the new guy. And then Joel replaced Mike back in 2009 and Ben has always been there. What’s the camaraderie and musical chemistry like within the band currently?
When I rejoined, it was like I’d never left. It was just like getting on a bike again after years, it’s just easy to ride. When Matt left, the vibe obviously changed. No detriment to Matt, but it changed for the better in a way. It’s a lot more relaxed and positive now. Adam, he’s quite young, he’s 19. His first concert he went to was when he was 11 and it was Evile. His first concert was us, and now he’s in Evile. He’s a really good guitarist. He’s really mellow and easy to get on with. It was a really good inclusion to have him in the band.

What was the inspiration to cover Mortician’s “Zombie Apocalypse?” You really don’t hear too many renditions of this band.
I’ve been a fan of death metal since I was an early teenager. I like the old and the more riff based death metal, like Obituary, Deicide, Cannibal Corpse, that kind of thing, the classic death metal. Mortician was another band that I really liked, but no one I knew liked them. The guitar riff in that song is one of my favorite riffs of all time. It’s such an underrated riff. So, I said we have to do this song, if anything it’s just an excuse to play that riff. That’s why we did it. We just love that riff and said let’s just do it.

With “The Thing (1982),” is that an homage to the movie? What made you want to create this track?
We’ve always tried to include films in our songs. The first album we had maybe four. We had “Killer from the Deep,” which is Jaws, “We Who Are About to Die” was about Gladiator, “First Blood” was obviously about Rambo. We hadn’t done it for a while so we thought, let’s do a film song. And my favorite film of all time is The Thing from 1982. So, it just made sense. We had one song that didn’t have any subject matter, and I was like, let’s do The Thing.

Due to the ongoing global pandemic and no one knows when bands will be able to tour again, what will you be focusing on next?
It’s hard to say. We’re talking to our booking agent and we’re trying to get something booked, but it’s difficult because no one knows what’s happening. We’re looking at booking a UK tour in 2022, but even that we don’t even know. There’s a few festivals we have booked in Europe. There’s a UK festival in August this year, and we’re just crossing our fingers, really. We don’t know what’s going to happen. It could get canceled next week. We’re just waiting and seeing. We’re playing it by ear day by day. We’ve been locked down a year now and it’s just fucking boring! We really want to get out there.

NILE: Back to Basics

THE ALMOST: Solace, Anger, or Sensibility