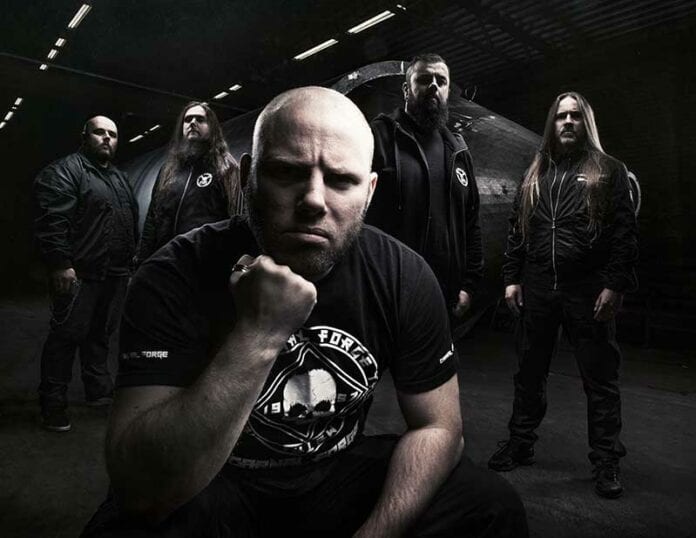 In today’s modern metal climate, the melodic death/thrash that emanated from Sweden back in the 90s and mid millennium is looked at quite differently depending on the age of the fan in question. For those who remember, the sound from Gothenburg, Helsingborg, and beyond seemed as a natural progression from the grittier Stockholm bands like Entombed, Dismember, or Desultory. This latter band in particular exemplified the growing emphasis on melody, and it was the sound Sweden would largely run with for years, eventually influencing American metalcore acts across the pond.

It’s here where the sour taste comes in, as some also associate the melodic death metal sound with the formulaic copycats who eschewed the intricate lead guitar and musicianship for dumbed-down arrangements and unimaginative breakdowns. To their credit, Carnal Forge were always a thrashier proposition, and released a slew of octane fueled aggro-fests throughout the 2000s before falling off the map after their 2007 album, Testify for My Victims. The band has returned, however, and it sounds as if they haven’t missed a beat. Gun to Mouth Salvation is consistently powerful in its execution and delivers more than enough nostalgia for those who yearn for pure Swedish steel, without any diluted metalcore moments.

We spoke to band founder Jari Kuusisto to catch up on what the hell has kept Carnal Forge busy for the past decade.

It’s great to have Carnal Forge back on the scene, and it was surprising to find out the band was finally releasing a full-length follow-up to Testify for My Victims. You released two singles in 2010 and 2014, but other than that it’s been pretty quiet. Can you bring us up to speed with what’s been going on with Carnal Forge for the last decade or so?
Not much actually. We just had to take a break from the band because of personal issues, and that we weren’t having much fun anymore. We actually talked all the time about starting the band again, but never found the right moment. In 2015, we just said, “Let’s do this,” and see how it will feel. Thankfully, everything felt really fun again, so we started making new songs and the result became Gun to Mouth Salvation.

Were the “Blood War” and “When All Else Fails” singles intended to kick-start interest in Carnal Forge? These songs weren’t re-recorded or included on Gun to Mouth Salvation. Did Tommie Wahlberg joining the band on vocals have anything to do with this decision, to present the new lineup of Carnal Forge with this new album?
I guess those songs were more to see if we would like to go on with the band. Tommie actually joined the band in the middle of the recording process of the new album. Jens [Mortensen, vocals 2004–2007, 2013–2018] became a father for the first time and decided that he wanted to be home with his child as much as possible. He knew that the day would come when either touring or other stuff would take time from his family, and that he wouldn’t be giving Carnal Forge that time.

How did you guys hook up with Tommie, and what does he bring to the band musically? Did he help in writing any of the music, and did the overall process stay the same from prior Carnal Forge releases?
Tommie is a close friend to everyone in the band. Me and Petri [Kuusisto, guitar] had done things with him earlier and already knew that he was a great vocalist. We just called Tommie and asked if he would like to try out to be in the band, and he agreed right away. We gave him three songs to write lyrics for and told him to get back to us as soon as possible. Tommie called the next day, and said that he would like to come to the studio to try what he wrote. We thought that he had written maybe one lyric that he wanted to try, but he a had written lyrics and song arrangements to all the songs he got from us. After trying out the first part of the song “Reforge,” we already knew that we hit the jackpot with Tommie. He just made the song sound complete, and the rest is history.

“AS LONG AS WE WILL HAVE FUN, WE WILL GO ON”

As a diehard fan of the Swedish death/thrash scene, as well as the melodic death metal world, there aren’t nearly as many bands performing this style as there was when Carnal Forge was at its most prolific. Did any of this weigh on you when deciding to return to the scene with Gun to Mouth Salvation?
We always knew that many people knew about the band. Our fans actually stayed with us during the break and always wanted us to make at least one more album. As long as we will have fun, we will go on, so that is what’s most important to us.

From 1998 to 2007, Carnal Forge was on a tear, releasing an album almost every year. This was particularly true from Firedemon on through to Aren’t You Dead Yet? How does it feel taking your time releasing this new album versus writing and recording on such a quick schedule?
I think that it’s important to not wait too long between the releases. If you’re someone like Slayer, then it doesn’t matter, but when you’re in a smaller band it’s really important. Thanks to the internet, so much music is coming out all the time, so if you’re not staying up to date, then it’s easy to drown amongst all the bands. The next album is actually already being written.

What are the benefits of releasing Gun to Mouth Salvation with ViciSolum Productions, as opposed to the albums you did with Century Media? Is it more comparable, perhaps, to working with W.A.R. back on Who’s Gonna Burn?
Yes. It’s more like W.A.R. Music. I guess that it’s harder to get tour support and stuff like that on a smaller label. At the same time, you don’t have to fight with a thousand bigger bands on the same label. We will try to make the band as big as possible, and hopefully that will be on ViciSolum. So far, the collaboration works great.

You’ve been around and watched the Swedish scene grow from the early days with your band In Thy Dreams and have seen the Stockholm bands blow up in the 90s, right on through the Gothenburg scene and the black metal explosion of bands like Marduk and Dissection. Today, the metal world is a very different place, with the internet connecting fans around the world in a much more immediate way. What are your thoughts on how Sweden has evolved as a metal country, and where does Carnal Forge fit in that landscape today?
Sweden has always been a small country that puts out tons of great music, and that hasn’t changed. I touched on this subject earlier concerning the internet, and I really like that it’s so easy to access music nowadays, but at the same time I think that it’s almost impossible for a new band to get heard. There are so many new bands popping up all the time, that it’s impossible to keep up. Carnal Forge was lucky to make a name for ourselves before the internet exploded, and I think that’s one of the reasons that we still can put out an album and get recognized.