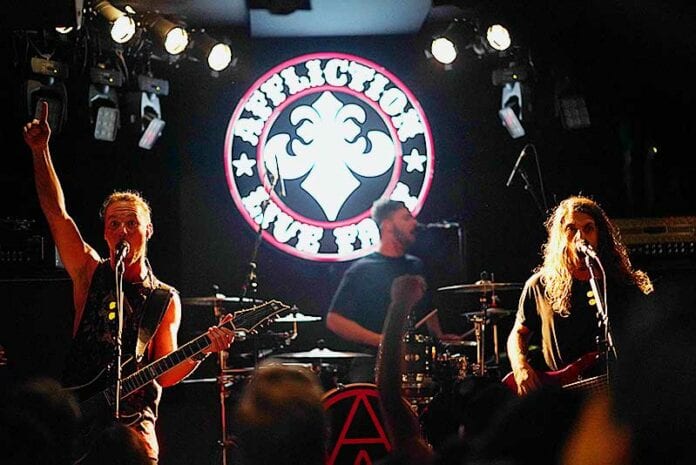 New Zealand’s very own Alien Weaponry have found their way back to California soil to kick off a tour with Black Label Society. A band heavily influenced by Māori (Māori originated with settlers from Eastern Polynesia, who arrived in New Zealand in several waves of canoe voyages somewhere between 1320 and 1350), Alien Weaponry has quickly made a significant splash in the metal world. From playing all of the biggest festivals in the world to touring with legendary bands, this group is hard to ignore.

Before embarking on their national headbanging escapades, we got to catch up with the fellas at Jose Mangin’s famous Taco Metal Party at the Affliction headquarters in Seal Beach, revealing some information Alien Weaponry fans will be keen to learn about.

Alien Weaponry is back in sunny California. How do you feel about playing at Jose’s Taco Metal Party?
Lewis and Henry: Pretty stoked! This is our first Jose party, and we hear that they are pretty fun and wild. Yes, it is quite sunny in California because I look like a lobster!

Bobby: Lewis and I went to the beach yesterday, and he was adamant that he’d never been burnt anywhere other than New Zealand until now!

Bobby: We might call it “Rock Lobster.” Wait, no, actually that’s already been done.

How did you guys even get hooked up with Jose in the first place?
Henry: The first time we came to the US, he was super keen to meet us. He was playing us hard on Liquid Metal, and he said, “Hey guys, you should come to my studio in California and I’ll interview you!” We came down, did the interview, and he’s been super cool. He’s a super cool dude. Now he’s throwing this party for us and Jinjer, which is really cool! We bump into him at a whole lot of festivals. He was in Download in England! No matter where you are in the world, he will be there!

Do you feel his influence pushed your music in the States?
Lewis: No doubt about that! Honestly, three quarters of the fans that come up to us say they’ve hard us on Liquid Metal. It’s been really awesome, what he’s done for our fan base over here.

You lads have been on the road a lot in the past few years. Has any place in particular become your favorite to perform in?
Henry: I’ll be honest, one of my favorite places to play has been Slovenia. Purely because of the Metal Days Festival, which was the first European music festival we played. It’s a super, super, super beautiful country!

Lewis: Also, California is an awesome place to be and hang out! It’s so sunny and cool.

How do you feel the crowd differs between all of the countries you’ve played?
Henry: America is wild! America is like being in Europe. You go to the different states and get a different crowd.

Lewis: I feel like American crowds are way more diehard. There are some diehard enthusiastic people in the crowd. You get some real diehard fans in the audience!

Speaking of California, your show at the Roxy Theatre was your first headline in California. What was your favorite aspect of playing that?
Lewis, Henry, and Bobby: The whole night was awesome! We can’t pick a favorite. The crowd, the wall of death, all of it was amazing. The wall of death is always a highlight. A lot of people showed up, which was a surprise. That was only our second time in America.

What does the future hold?
Henry: Once we get back to New Zealand, our plan is to immediately start writing new stuff for the next album. Hopefully, we will be doing music videos for that in the near future. We don’t have specific dates set, but definitely an idea on when we want to be recording. Fans can expect a new album pretty soon from us!

Lewis: There is going to be English on it, a lot of Māori on it. Honestly, we write music on whatever we are feeling strongly about. Hopefully, it all goes well!

A producer in mind?
Henry: That’s actually something we’ve been discussing. We still haven’t quite come to an agreement on that, but we are looking at different producers to see who we can possibly get on board. We have had some pretty good ideas and will start reaching out soon!

“A LOT OF FANS USE US AS GYM MUSIC, SO APPARENTLY WE ARE GOOD TO WORKOUT TO!”

Bobby: That is a good goal actually, try to write music that inspires you to workout so that you stay healthy while you tour!

On that note, what has touring life been like for you?
Lewis: So far it has been great! Definitely not boring. You get to visit some amazing places and see some crazy shit.

You’ve toured with some legends in the music scene. How have they been to you?
Henry: I have no idea how half of this shit that has happened, has happened!

Bobby: We are just really grateful that people really like the music, and so many of the bands we’ve met on the road have really liked the music as well.

Henry: It’s always a cool feeling to know that someone you look up to and find inspiration in also thinks that of you.

Bobby: You can’t stop complimenting each other!

Any bucket list bands you’d like to tour with?
Lewis: Meshuggah, Gojira, Slipknot, Metallica would be cool!

Henry: Lamb of God as well. I’d really like to tour with them. They’ve played a bunch of festivals that we’ve also played. We’ve seen them a bunch.

Making connections everywhere you go?
Henry: Oh totally, you stand there awkwardly and say a couple of words (laughs).