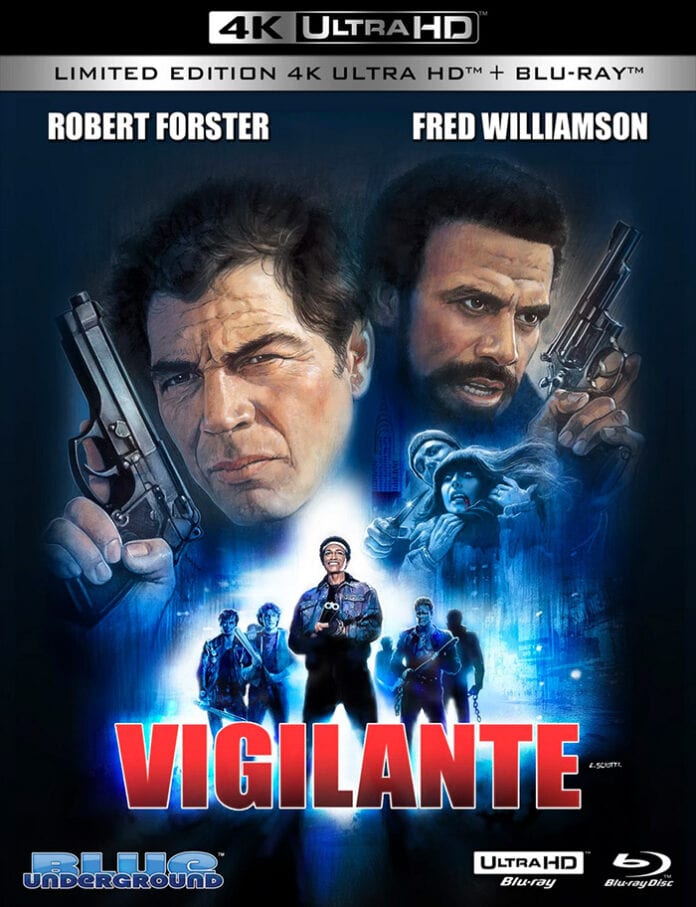 Bill Lustig didn’t direct as many films as some of his horror and exploitation contemporaries, but he has one hell of a batting average. After all, the man was responsible for the grim slasher classic Maniac, the underrated 1996 horror jam Uncle Sam, as well as the Maniac Cop franchise.

Vigilante might be Lustig’s most fully realized film, however, a briskly paced and effective action/revenge picture with a fantastic cast and excitement to spare. The 1983 film is a reaction of sorts to the rise of violent crime in New York City, a reflection of the everyday fears and struggles for daily Americans. This sort of sentiment was already explored in a film like Death Wish, but Lustig’s direction and Richard Vetere’s screenplay update things for the early 80s and does so in an incredibly entertaining fashion.

Robert Forster steps into Charles Bronson/Paul Kersey archetype of a man named Eddie who believes in the system and refuses to join in when his friends form a vigilante gang to take back the streets. Fred “The Hammer” Williamson co-stars as Eddie’s friend Nick, who leads the gang in violently stopping crime in the neighborhood, by any means necessary. Then, Eddie’s family is violently assaulted, the courts let the perpetrator go free, and Eddie is at a loss. Will he join up with Nick’s gang and exact vigilante revenge?

I’m trying not to spoil any of the twists and turns present within Vigilante, because Lustig and Co. keep audiences guessing with a story that goes to some surprising places and isn’t afraid to get really nasty with some of its violent content. The film also boasts an excellent supporting cast, including the Maniac himself, Joe Spinell, Carol Lynley, and musician Willie Colõn as the local gang leader. We’re put right into the thick of things from the get-go, and Vigilante never stops moving for a moment, keeping the audience engaged right until the thrilling climax.

This 4k Blu-ray from Lustig’s own Blue Underground keeps up the company’s track record of re-releasing their back catalog with a bevy of extras and a noticeable upgrade in A/V quality. Vigilante looks fantastic, with brilliantly saturated colors and no artifacting or distortion to speak of, while extras include three different audio commentaries. Two are archival tracks featuring Lustig with co-producer Andrew Garroni and another featuring Lustig with Williamson, Forster, and co-star Frank Pesce, while a new audio commentary is also included with critics Troy Howarth and Nathaniel Thompson.

This latter track is a great modern appreciation of the film by two of the most insightful and astute genre cinema historians working today, but it’s particularly fun to revisit the older tracks with Lustig himself regaling stories of production and development. The second track was this writer’s favorite, thanks to the ease and humor shared between Williamson, Pesce, Lustig, and Forster. It’s a commentary that’s both entertaining and informative, the way it should be.

Other extras include new interview featurettes with Vigilante screenwriter Richard Vetere, co-star Rutanya Alda, and associate director Randy Jurgensen that detail production while cutting back and forth to blurbs given by Lustig and crew about how Vigilante was developed, produced, and the reception it received back in the early 80s. There’s also a great interview with frequent Lustig collaborator Jay Chattaway, who has delivered some of his best scores to films like Maniac and Maniac Cop. My only complaint with this Blu-ray release is that Chattaway’s “Urban Western” flavored score wasn’t included on CD, the way Blue Underground has done with other home video releases like Daughters of Darkness and Two Evil Eyes.

That aside, this two disc package (there’s a normal, non 4K Blu-ray disc included, as well) is pretty much the definitive version of Vigilante to own, a welcomed way to revisit one of the decade’s most fully realized revenge pictures and yet another example of Bill Lustig’s work behind the camera. ~ George Pacheco