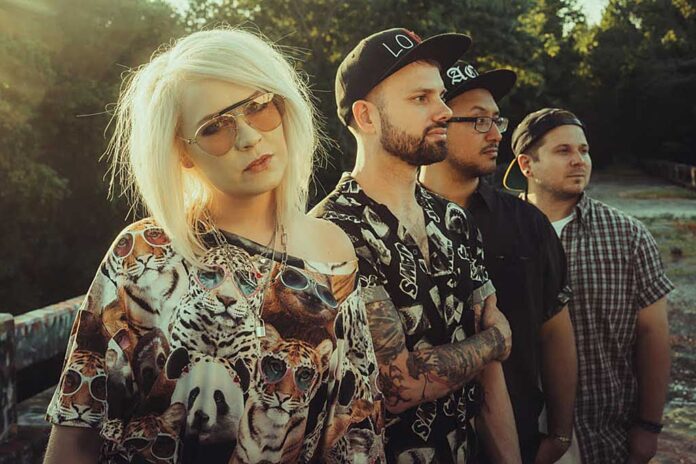 WATCH THE EXCLUSIVE PREMIERE OF THE NEARLY DEADS’ LYRIC VIDEO FOR “RELENTLESS” ONLY ON OUTBURN.COM

Alt rock stalwarts The Nearly Deads have announced the October 31 release of “Relentless,” the electrifying first taste of their forthcoming 2nd full-length, We Are The Nearly Deads.

On the new missive, taut call to arms, the quartet has expertly crafted the melodic palpating rocker with all the hallmarks of what fans have come to know and love from the accomplished band. With a searing mosh-pit main riff fueling an infectious bit of pop bombast and a bridge that goes full brass, replete with a marching, militaristic crescendo before dipping into a sea of sweeping ivories, a lush pulpit for inimitable vocalist Theresa Jeane to mightily deliver a rousing fist-in-the-air proclamation of strength and affirmation, it’s a rousing anthem that harkens back to their breakthrough hit “Never Look Back.” Wire to wire, it sounds like the ordained paean for the next generation of The Hunger Games.

“Like most of the songs I write, ‘Relentless’ began as a riff. Early on, the riff used in the intro and choruses kept sticking out to me, so from there we built the song around that energy. As the bridge was coming together I began to notice the song had a bit of a marching rhythm and militaristic vibe, so it just felt right to lean into that with both the lyrics and instrumentation. It was that realization which sparked the idea to incorporate a brass section into the song which I feel is something unique for a rock anthem.

“For the lyrical theme, I had been thinking a lot about regret, human nature, cancel culture and the idea that we all have these memories that no one but ourselves know about because we are either too afraid or embarrassed to reveal. TJ liked the idea and took it further stating that there is an unspoken pressure to be “perfect” coming from both social media and society; therefore we become ashamed and even scared of revealing the honest versions of ourselves. With that in mind, the song developed into what we hope is an empowering message to love yourself entirely, both your success and failures. Live a transparent life with no regrets.” – Steven Tobi (Guitarist for The Nearly Deads)