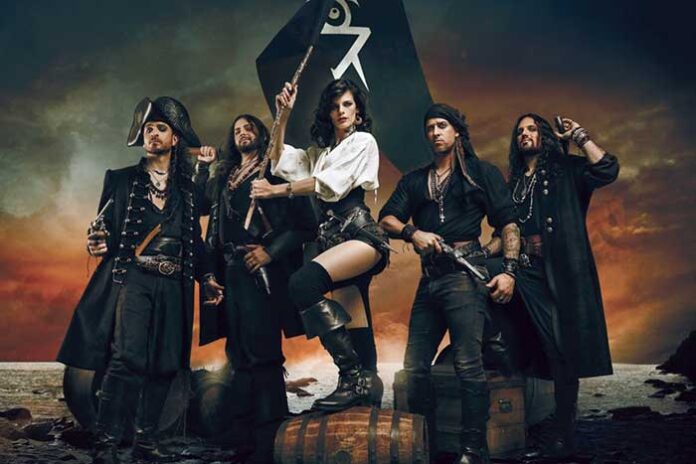 VISIONS OF ATLANTIS is set to release their upcoming studio album, Pirates, on May 13, 2022 via Napalm Records. With their latest albums, visionaries VISIONS OF ATLANTIS have without a doubt proven that they are on top of the scene. Now, the band sets sail on an adventurous new journey and exciting chapter, marking a turning point of their discography with the upcoming album, Pirates.

Together with the album announcement, the international band presents the first single off the new album. “Legion of the Seas” shows VISIONS OF ATLANTIS in an unknown way. The song is heavy, wild and sets a sign for freedom. Michele grows in his position as second frontman, while Clémentine delivers everything from energetic high notes to emotive whispers in a perfect manner—culminating in a gripping duet. Both voices now sound more matured than ever!

The official music video, produced by Lichterwald Produktion, lifts VISIONS OF ATLANTIS’ videos to a new level. It’s a cinematic music film, highlighting the acting skills of all band members and featuring a nasty pirate!

VISIONS OF ATLANTIS states:
“Legion of the Seas” is a statement song that embodies the mindset we carry throughout the entire record. No matter what we are facing, we remain the masters of ourselves and our lives. We are delighted to welcome the listeners on board of this new age of VISIONS OF ATLANTIS with this powerful video, for one of the heaviest songs of the record. Acting scenes meet a fiery band performance, all in a very cinematic way, conveying our universe the best way.”

WE CAME AS ROMANS Announces Rescheduled To Plant a Seed Anniversary...