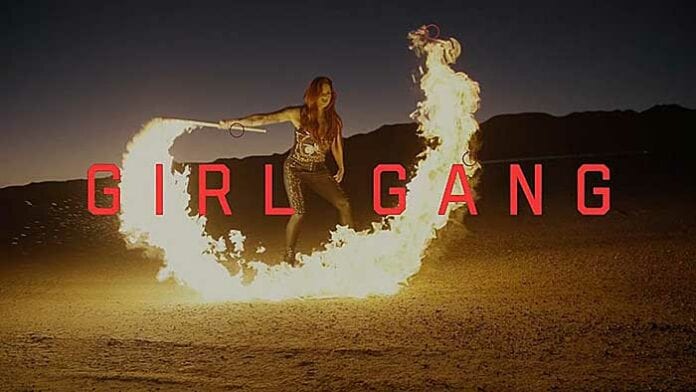 Daredevil rock ‘n’ roll vixens the CHERRY BOMBS are proud to present a new YouTube series entitled “Girl Gang” that takes fans behind the scenes to witness the relentless work and dedication that goes into making the CHERRY BOMBS tick.

Founded in 2012 by former NFL cheerleader Alicia Dove, a CHERRY BOMBS’ show is rock ‘n’ roll cabaret featuring talented dancers, top-notch aerialists, amazing fire artists, and other cirque acts. While similar groups have existed for years, the CHERRY BOMBS set themselves apart as trailblazers by taking this spectacle on the road.

Says CHERRY BOMBS Founder/Director Alicia Dove, “We are ever-evolving, trying to think of new, dangerous and interesting skills and acts. All the women have an incredible amount of experience in their respective fields, and I think one thing people are shocked to learn is that we don’t have a crew. We do all of our own building and tearing down, our own rigging, our own fire set up and walk through with fire marshals, our own venue inspections.”

Beyond presenting a uniquely spectacular show, the CHERRY BOMBS have taken on a deeper to meaning about perception about women, sexuality, strength, empowerment, hence the series’ “Girl Gang” title.

“I’m really trying to help push the envelope in terms of perception,” Dove says. ”I have seen so much negativity and ugly treatment between women – and towards women. The CHERRY BOMBS have morphed into a place where we can find strength and become part of a more positive narrative. I truly believe in the idea of ‘do no harm, but take no shit.’ Don’t go out of your way or take action to be destructive, but take a stand against it when it comes at you, or you see it happening to someone else.”

The CHERRY BOMBS have confirmed to perform at Knotfest Meets ForceFest in Mexico City on November 30-December 1 and Knotfest in Bogota, Colombia, on December 6.

Dove adds, “Groups like mine haven’t really broken into the live rock music touring world until now. Our goal is to give audiences an entirely new experience when attending a rock or metal concert, something to shake things up a bit.”