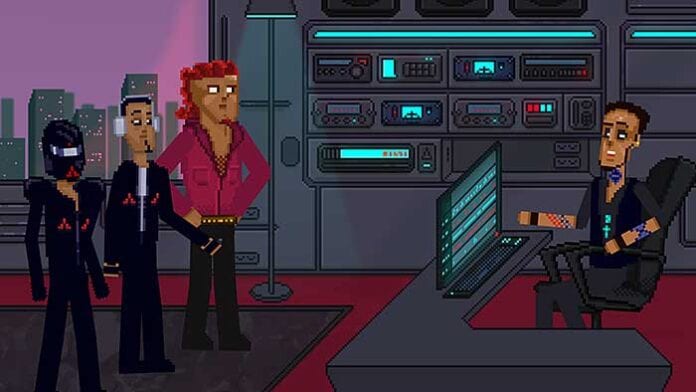 The series, created by Mike Evans of UK based electronic rock act MiXE1, chronicles the exploits of the fictional band X-RL7 in a mix of comedy, social commentary and original music.

Fueled by mysterious dream-like visions, the show follows the enigmatic X-RL7 frontman Omega as he navigates the trials and tribulations of the music industry alongside guitarist/producer PJand flamboyant larger-than-life band manager Alfie in their journey to make it to the top of the musical food chain. Featuring a myriad of colorful characters and original electronic rock tunes set against a cyberpunk-inspired futuristic backdrop.

“I’m absolutely delighted (and terrified) to launch X-RL7 at last,” Evans says. ”The series has been in development for over a year and a half and represents the amalgamation of so many of my passions – my love of pixel art, music, comedy, social commentary, romance, cyberpunk and conspiratorial themes all coming together in one unique pixelated cocktail.”

The series is free to watch. Check out the first episode.

The origins of the X-RL7 project can be traced back to 2016 in the form of an unfinished point and click adventure game developed by Evans with the concept revolving around a music journalist and other fictional bands with original music. After moving on from this, Evans formed Youtube video series Project Anything, honing his animation skills, while still creating music with his band MiXE1. Still enamored by one of the songs he penned for the game (“Apotheosis Man”), Evans picked up the remnants of the project in late 2018 and started repurposing it as a video/music series with a brand new story, focusing largely around one specific band – X-RL7.

Along the way Evans approached musical friends and past collaborators to lend their voices to various characters and songs. As the series took shape, he approached others in the alternative music scene, some of whom he has been a fan of for many years, who kindly got involved and delivered fantastic performances as their animated counter parts.

“I am very blessed that so many super talented artists have taken the time to lend their voices to the project, embracing the world of X-RL7 and the music,” says Evans.

A new episode will be released every two weeks, with episodes of the sub-series X-RL7 Backstage – which digs deeper with mini-documentaries about the making of the series – official lyric videos and more released in between. Additionally, the first musical installment of the project, the debut album Apotheosis Music is available today via all digital music providers. More music will be released throughout the year.

From the retro-inspired visual style and cyberpunk aesthetic, the comedy, the eccentric characters, the references to musician life, the original electronic-rock music, the awesome guest appearances, X-RL7 is a fun and unique project. Join X-RL7 on their journey.

Be sure to follow X-RL7 on social media for additional announcements and support the project on Patreon for exclusive rewards and content.

THE CULT Announce “A Sonic Temple” Special Event at The Greek...