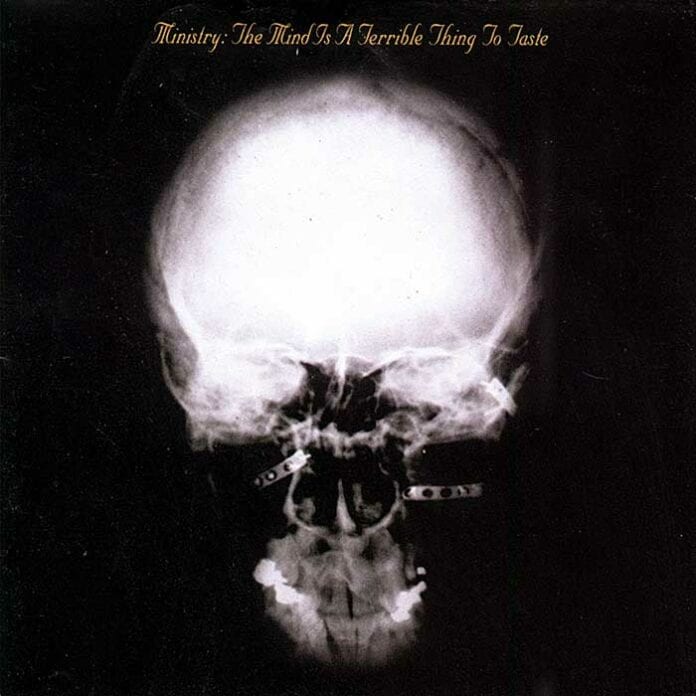 Today, November 14, Ministry marks another important milestone with the 30th anniversary of revolutionary album The Mind Is A Terrible Thing To Taste. Released in 1989 and featuring hit singles “Thieves,” “Burning Inside” and “So What,” the record further cemented Ministry and Jourgensen as music innovators ahead of their time and produced a voluminous, aggressive sound that became a trademark for the industrial music genre.

To celebrate, Ministry releases a 30-second montage video, which can be seen here:

As well, the Ministry store offers a special The Mind Is A Terrible Thing To Taste anniversary collection, available here: https://store.ministryband.com/collections/apparel

Ministry has added several of the songs from The Mind Is A Terrible Thing To Taste to its latest tour, joining Slayer on the thrash metal band’s final dates of its Farewell World Tour. In addition, Ministry has several headlining dates on the trek. Find all ticketing info at www.ministryband.com.

Al Jourgensen also has an upcoming one-night-only appearance to celebrate the release of the new fully authorized visual history book Ministry: Prescripture. Due to overwhelming fan demand, the event will now be held at a bigger space, Morgan’s On Fulton in Chicago’s West Loop neighborhood, on Friday, December 13.

Jourgensen will be signing books alongside author and designer Aaron Tanner. The event is open to the public and will begin at 6 pm. After the signing, there will be an afterparty with DJ Scary Lady Sarah spinning industrial, gothic and new wave tracks from 8pm to midnight.

Tickets are free but attendees must register here: www.eventbrite.com

Only 2,000 copies will be printed of Ministry: Prescripture. The limited-edition book includes 248 pages of anecdotes from Ministry’s music contemporaries plus rare and unseen photos, artwork and other ephemera that spans Ministry’s entire career. As well, a special 7-inch of the Ministry classic ”(Every Day Is) Halloween” featuring Dave Navarro is included with the purchase of the deluxe edition of Ministry: Prescripture. Read more about the book via Rolling Stone here. There will be copies available for purchase at the December 13 event, and out of town fans can also purchase copies at this link: melodicvirtue.com/collections/ministry

Chicago’s Kuma’s Corner is also joining in on the celebration at their nearby West Loop location by re-launching the infamous Ministry burger during the week of December 9-13. The 10-oz. beef patty (or choice of protein) is topped with bacon fat aioli, applewood smoked bacon, fried smoked gouda cheese, caramelized vegetable medley, red wine gravy and fresh thyme.

Exclusive Premiere: NOT MY GOD’s New Music Video for “Ashes”