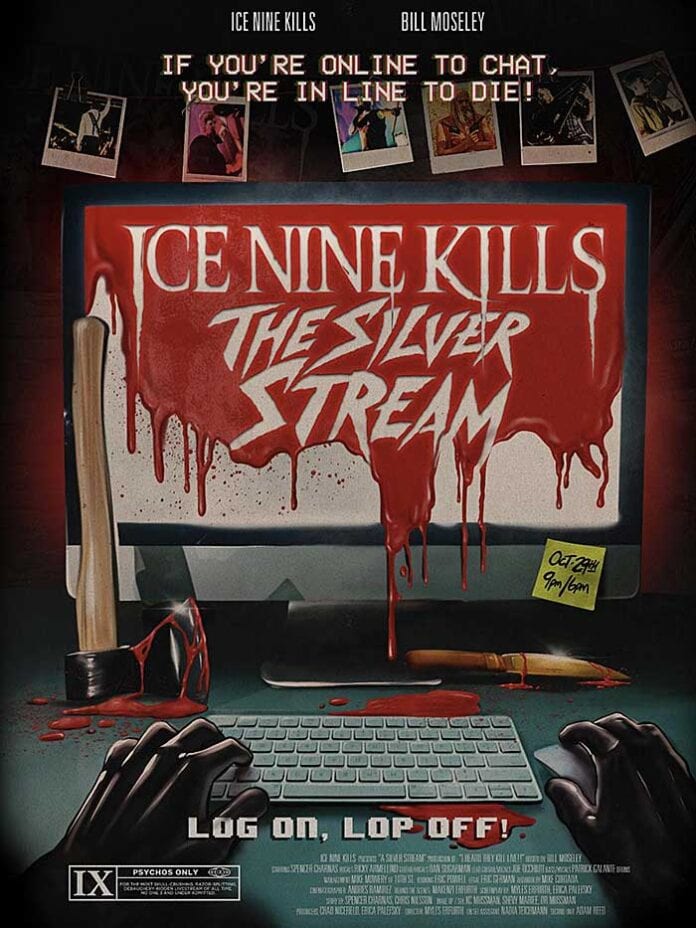 Horror themed, metalcore pioneers Ice Nine Kills have unveiled a new cinematic trailer for their upcoming interactive horror experience “The Silver Stream.” Join the band and official host than cult horror icon, Bill Moseley (House of 1000 Corpses, The Devil’s Rejects, The Texas Chainsaw Massacre 2) as they take fans on a journey through the bowels of hell for this unprecedented interactive experience that will feature the concert footage of their 19-track set, shot with an 8 camera set up at their sold out hometown show at The Worcester Palladium and a bespoke, built-in horror movie created by Spencer Charnas and director Myles Erfurth of Stained Glass Eye Ent. Tickets for “The Silver Stream” are available now from iHeardTheyKillLive.com.

Speaking on this groundbreaking, interactive horror experience, Ice Nine Kills frontman and creative visionary, Spencer Charnas says, “The only thing scarier than the horror that has been 2020 will be “The Silver Stream.” Don’t miss THE event of the spooky season hosted by the one and only Bill Moseley.”

Perhaps best known for his roles as Chop Top in The Texas Chainsaw Massacre 2 and as Otis B. Driftwood in Rob Zombie horror classics House Of 1000 Corpses, The Devil’s Rejects and Three From Hell, Moseley is one of the most prolific and iconic actors within horror. His intimate knowledge and vast expertise, make him the perfect guide for fans as they traverse the deadly, blood splattered spectacle that is “The Silver Stream.”

The stream comes in celebration of the impending release of the band’s upcoming live album, I Heard They KILL Live!! out this Friday, 30th October via Fearless Records. The album features the audio from the same killer 19 song live set recorded live at the band’s sold-out, home town show at The Worcester Palladium on November 30, 2019, whilst on the Octane Accelerator tour. It features massive Ice Nine Kills tracks from their 2018 hit album The Silver Scream, as well as fan favorites such as “Hell In The Hallways” and “The Fastest Way To A Girl’s Heart Is Through Her Ribcage.” The album is available to pre-order digitally, on CD or as a double vinyl LP with a variety of pre-order merch bundles available here.

POPPY Releases New Video for “All The Things She Said”

COHEED AND CAMBRIA and Sixthman Partner for Inaugural Cruise with Special...