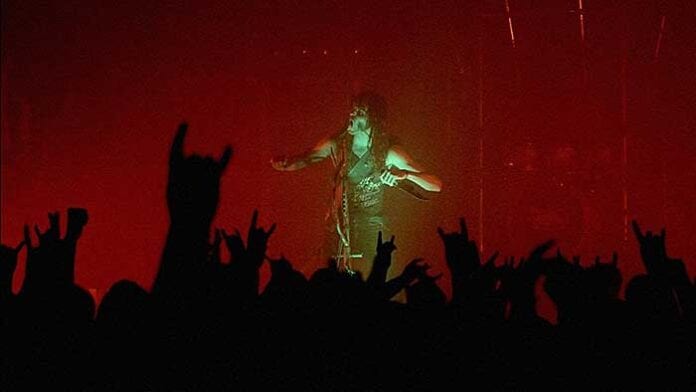 October 2019 saw progressive thrash and speed metal overlords EVIL INVADERS release their first live album + DVD via Napalm Records. Surge of Insanity – Live in Antwerp 2018 is the band’s ultimate hometown takeover, recorded at the Trix Zaal in Antwerp in 2018, and immortalizes their incredible high-octane live phenomenon in sound and vision. With Surge of Insanity – Live in Antwerp 2018, the band’s trademark sound – nestled in between death, thrash, progressive touches and traditional heavy metal – has reached another heady and exciting dimension that is second to none. EVIL INVADERS are the ultimate expression of aggression – an unstoppable roller coaster ride of tempo switches and twists from start to finish.

Due to self-quarantine concert restrictions, EVIL INVADERS recently streamed the DVD under the flag of their label’s highly acclaimed #NapalmSofaSeries. But to keep you heavy while being locked down at home, the band has now unleashed a blistering live clip of “Victim Of Sacrifice”!

Frontman Joe comments:
“‘Victim Of Sacrifice’ is the first track on our first release (EP) back in 2013. It was one of the first songs I ever wrote back in the day and ‘till today it has always been in our live set. It’s the last track we play live and as soon as that bass intro is done all hell breaks loose. All the energy that we have left just bursts out as soon as this song ends and personally I usually lose my mind completely. You can probably see that in the video haha!”

AMARIONETTE Break New Ground with “Sunset on This Generation”