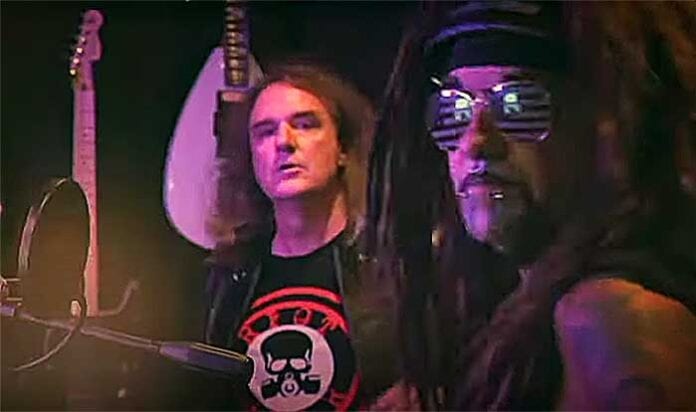 ELLEFSON, the eponymous solo band of Grammy-Winning Megadeth bassist and co-founder David Ellefson, earlier this week announced signing to EARMusic (Europe) and Ward Records (Japan) for the release of their upcoming full-length covers release NO COVER, which will be released Worldwide 11/20 in conjunction with Ellefson’s revived COMBAT RECORDS, who will release the album in North America via AMPED. The band also released the video for their cover of the Cheap Trick classic “Auf Wiedersehen”, featuring guest appearances from Ministry’s Al Jourgensen, Anthrax’s Charlie Benante, and Crobot’s Brandon Yeagley, alongside bassist Ellefson, vocalist Thom Hazaert, and guitarist Andy Martongelli.

“Auf Wiedersehen” is available on all digital outlets today 10/9 via Combat Records/earMUSIC, and the video edited by Melody Myers, can be viewed at the link below.

Also today, October 9th, proclaimed DAVID ELLEFSON DAY by the Mayor of David’s hometown of Jackson, MN, the band has announced a handful of upcoming tour dates, including late October Texas dates with SALIVA, The Crowned, and A Killer’s Confession, and a week of November CD release shows for NO COVER, with The Crowned. The shows will be limited capacity club dates, following all state and local safety protocols, social distancing, and capacity guidelines.

Says Ellefson, “We’re all trying to make sense of everything right now. We got offered the shows in Texas with Saliva several months ago, and as things opened back up, we thought if they could be done as safely as possible, for us and our fans, it might be possible to do them. So we decided to try. And with NO COVER coming out in November, we wanted to try and play a few intimate, limited capacity shows around the release, just to get out briefly and say hello to the fans. We have safety plans and protocols in place for capacity, limited interaction meet and greets, etc, and we think we can still have fun, play great shows, and keep everyone safe. These aren’t massive shows, they are very intimate club events, some with extremely low capacity, which we are hoping will make it possible for us all to stay as safe as possible and have some fun and semi-normalcy for a night. And as you can imagine, we are as excited to go out and play, as fans seem to be to see us.”